We turn our attentions to the Good Friday action with a full and in-depth preview of Newport County's visit to The Progression Solicitors Stadium.

In Opposition
Newport County arrive in Cumbria this weekend eager to return to action after a two-week break and aiming to put back-to-back defeats behind them.

Despite those losses, Michael Flynn’s men remain in good shape and occupy the final play-off spot in the table ahead of the Easter Weekend.

Indeed, if The Exiles are just six points behind third-placed Tranmere Rovers so if they can return to the early season form that saw them sit top of the pile then they could yet have a say in the automatic promotion picture.

After coming close to promotion in 2018 when they lost in the Play-Off Final to Tranmere, County fans will be hoping this can be their year to reach League One.

One To Watch
Michael Flynn bolstered his attacking options during the January transfer window when front man Nicky Maynard was drafted in on loan from Mansfield Town.

A graduate of the famed Crewe Alexandra Academy, Maynard made The Railwaymen £2.25million when he made a switch to Bristol City in 2012, while he also made big money moves to West Ham United and Cardiff City.

More recently, he got back on the goal trail with Bury in 2018/19 before his move to Mansfield and he’s a player who Barrow will have to keep a close eye on during Friday’s contest.

Head To Head
Barrow and Newport County have locked horns 21 times over the years and the record is pretty balanced, with eight wins for The Bluebirds and nine for The Exiles.

This Friday will be County’s first visit to Barrow in the Football League since 1971/72, although they did win 3-0 when they last made the trip in the National League in September 2012.

Referee
Premier League referee Lee Mason will return to action for the first time since the end of February when he takes charge of our Good Friday meeting with Newport County.

Betting
Newport County have been installed as 6/4 favourites for three points on Friday, with Barrow rated a 15/8 shot for victory and the draw priced up 2/1 with our friends at Sky Bet.

Live Streaming
Match Passes to watch Good Friday’s game live on iFollow Barrow are now available so that you can enjoy every second of the action as we go up against Newport County.

Live Commentary
We will also provide an audio commentary of Friday’s game when we link up with BBC Radio Cumbria who will describe every kick from our clash with The Exiles.

The midfielder, who spent the first half of the season on loan with The Exiles, broke his former teammates’ hearts with a beautifully taken set-piece as The birds came from behind to earn three points.

Scott Quigley had earlier brough Rob Kelly’s men back on level terms with an eye-catching finish of his own to cancel out Scot Bennett’s opener for the visitors but it was Devitt who stole the headlines.

There was a good tempo to the game in the early stages as both sides attempted to get their foot on the ball and play, though it took a little time for opportunities to start arriving.

There was a half chance for Jamie Devitt on eight minutes when he tried his luck with a curling, dipping shot from the edge of the box but it just didn’t come down enough to find the top corner.

At the other end, Josh Sheehan attempted to catch Joel Dixon out with a cheeky shot from long range but the keeper got across to cover it as it flashed wide.

The deadlock was broken just after midway point in the first half when Matty Dolan’s wicked free kick caused problems in the Barrow box and Scot Bennett drove an effort on goal which took a deflection as it flew past Dixon for 1-0.

The Bluebirds were almost on level terms on 27 minutes when Bobby Thomas’ long throw led to panic in the County box only for Luke James goalbound drive to be well blocked by a defender.

The visitors then came close to grabbing a second goal when Sheehan got away down the right and fizzed a dangerous ball low across the area which found the arriving Aaron Lewis but his first time shot was just wide.

Barrow seized on some hesitant play from Newport and the ball was fed inside for Devitt and he intelligently slipped Quigley through on the right side of the box but the front man fired over.

Devitt again let fly as the first half came to an end as he produced a clever turn twenty yards out but his powerful shot went just the wrong side of the upright.

Barrow began the second half in encouraging fashion when James galloped away down the right-hand side but his shot from a tight angle was well held by Townsend.

The Bluebirds were level on 56 minutes though. Jason Taylor brilliantly broke up play on the halfway line and slipped the ball through for Quigley. The striker showed superb composure to but inside away from the scrambling County defenders and left fly with a left-footed finish which picked up a deflection on its way into the net.

Quigley got through again not long afterwards as Barrow continue to show their teeth but this time keeper Townsend stood tall and made a good block to deny the centre-forward.

County were on the back foot and James Jones stole into the box to get on the end of another tempting Devitt delivery but the defender could only prod his effort wide of the front post.

The visitors mounted a rare attack as Sheehan slalomed his way through the Barrow defence to fire a low shot on goal but Dixon got on quickly to make a tidy save.

Star man Devitt then produced a moment of magic six minutes from time. As referee Lee Mason blew his whistle, the midfield star quickly strode on to a free kick on the edge of the area and curled a sumptuous effort over the ball and beyond the despairing dive of Townsend.

Things got worse for County in the final minutes as Mickey Demetriou was shown a second yellow card and The Exiles were forced to play the closing stages a man down. 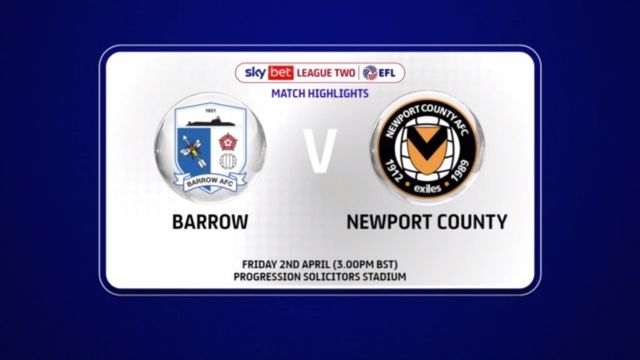 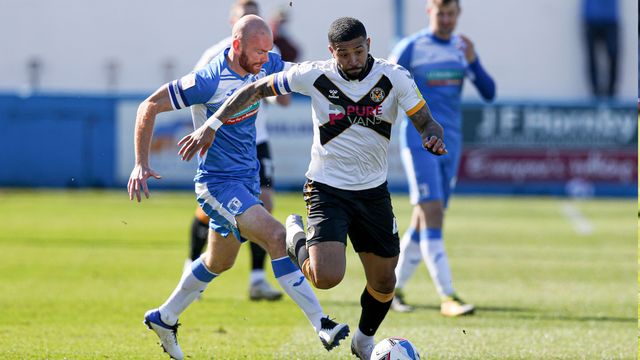