Take a look at all you need to know ahead of tonight's game with our full and in-depth preview of Port Vale's visit to The Progression Solicitors Stadium.

In Opposition
Port Vale have stormed clear of relegation trouble on the back of an astonishing six-game winning run engineered by new boss Darrell Clarke.

The Valiants turned to Clarke in February following the departure of John Askey and it looks to have been an astute appointment with the former Walsall and Bristol Rovers boss already making an impact.

While Vale may have left it just too late to put together a charge on the play-off places, the recent run of brilliant form means they can play with a sense of freedom during the run-in.

Indeed, after Saturday’s goalless draw at Carlisle United, Clarke hinted that he may look to rotate things during the final four games to have a more thorough look at the squad he’s inherited.

However, whatever team is selected this evening, Vale will be keen to pick up a result in Cumbria to avenge The Bluebirds’ 2-0 victory at Vale Park on Boxing Day.

One To Watch
Devante Rodney has enjoyed an excellent first full season of playing in the Football League and is Port Vale’s top scorer with 12 goals in all competitions during 2020/21.

The pacey and athletic front man arrived at the club during the summer following his departure from Salford City and is comfortable playing through the middle or out on the right hand side.

Rodney spent his youth days on the books of Manchester City and Sheffield Wednesday before winning a deal at Hartlepool United at the start of 2017.

Head To Head
Tonight’s game will be the 18th time the two sides have locked horns in competitive action and Vale have the edge historically having won nine of the previous 17 meetings.

This will be Vale’s first visit to Barrow since October 1966 when the sides drew 2-2 in Division Four, while our Boxing Day triumph at Vale Park was our first win over them since way back in 1938.

Referee
It’s a second visit of the season to The Progression Solicitors Stadium for Andy Haines as he takes charge of this evening’s League Two encounter with Port Vale.

An experienced official who has been on the EFL’s list of referees since 2007, Haines was also in the middle for our 1-1 draw with Leyton Orient back in October.

He has taken charge of 27 games across the various competitions so far this season, with his latest appointment coming ten days ago when he saw Salford City beat Stevenage 2-1 at The Peninsula Stadium.

Betting
The bookies are struggling to separate the two sides ahead of tonight’s contest with Barrow rated an 8/5 shot for three points and Port Vale given odds of 8/5 on taking victory in Cumbria.

Live Streaming
Match Passes to watch tonight’s game live on iFollow Barrow are now available so you can see all the action in our clash with The Valiants as it unfolds online.

Live Commentary
We will also provide an audio commentary of Tuesday’s game when we link up with BBC Radio Cumbria’s Chris Stott and John Goodwin who will describe all the action as it unfolds.

Barrow were beaten on home soil as Port Vale continued their impressive end to the season with a 2-0 victory at The Progression Solicitors Stadium on Tuesday night.

Tom Conlon scored in both halves for the visitors – his first a spectacular long-range volley – as Darrell Clarke’s in-form outfit went home with all three points.

Rob Kelly sprung a surprise on his team sheet by including Matt Platt, who returned from a knee injury to make his first appearance since the end of January, while Tom Beadling and Kgose Ntlhe were also restored to the starting eleven.

The game had an intense feel to it from the first whistle as both sides showed a keen competitive spirit with tackles flying in from The Bluebirds and their visitors.

Neal Eardley’s flighted corner from the right caused an early moment of panic in the Vale box but Kgose Ntlhe’s header was cleared, and the referee waved away appeals for a penalty as Jason Taylor fired a shot wide from the rebound.

Wing-back Eardley then whipped in a free-kick which found Bobby Thomas in the area but the defender couldn’t apply the finish and the ball flew over the bar.

The physical nature of the opening saw yellow cards shown to Brad Barry and Vale’s Shaun Brisley after an altercation following a foul, while Kurtis Guthrie followed them into the book moments later for a late challenge on Joel Dixon.

The Barrow keeper then had to produce a good save to deny Cristian Montano after the visiting forward got through the home defence on the left, but Dixon stood tall and made an excellent block.

A moment of real class saw The Valiants go in front on the half hour. The ball sat up nicely for Tom Conlon in the centre circle just inside the Barrow half and he struck a sweet left foot volley which looked a goal from the moment it left his boot as it dipped over the helpless Dixon and into the net.

Barrow felt aggrieved not to be awarded a penalty right at the end of the first half when Tom Beadling went down under a robust challenge, but referee Andy Haines – well placed to judge – was unmoved by the protests and instead blew his whistle for half time.

There was a similarly high tempo to the start of the second half but not much in the way of clear cut chances – Patrick Brough had the first effort on goal with a volley from the edge of the box which crashed into the roof of the stand.

Rob Kelly gambled midway through the second half, bringing on Ollie Banks and Calvin Andrew in an aggressive change as he looked to find a way back into the game.

However, Vale defended with determination and broke clinically through Will Swan who was tackled brilliantly by Ntlhe just as he lined up to shoot – only for the ball to break kindly for Conlon to drive home his second goal to double the visitors’ lead.

Brough could have pulled one back for The Bluebirds almost immediately when he let fly with a powerful drive from twenty yards but keeper Scott Brown did well to claw it away from the top corner and Vale cleared.

Swan then tried his luck from long range with a low shot on goal but Dixon saw it all the way and got down quickly to his right to gather the ball comfortably.

Barrow attempted to apply some pressure as time ticked away but Vale held them at arms’ length and avenged their 2-0 Boxing Day defeat to The Bluebirds by securing the points. 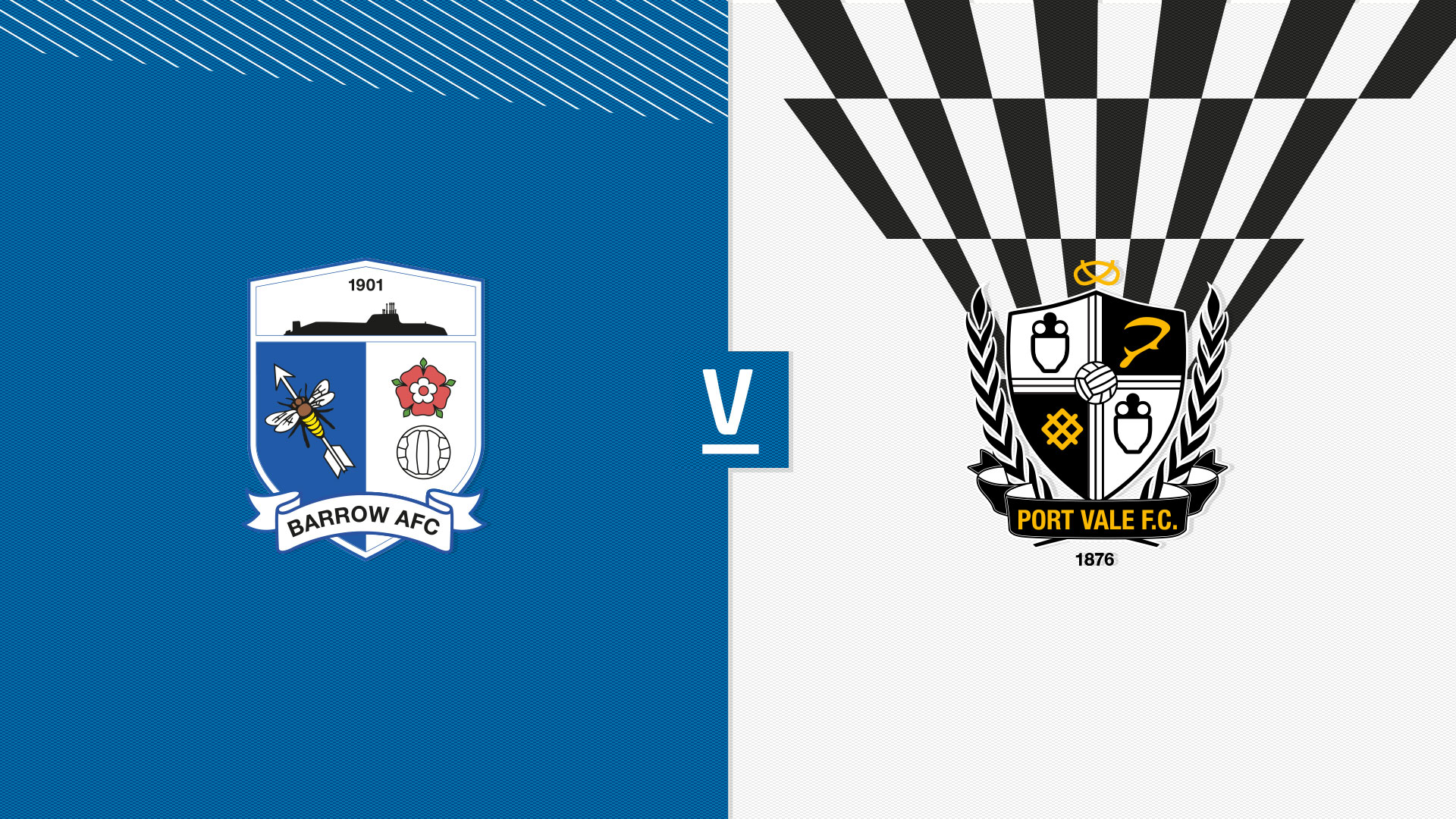 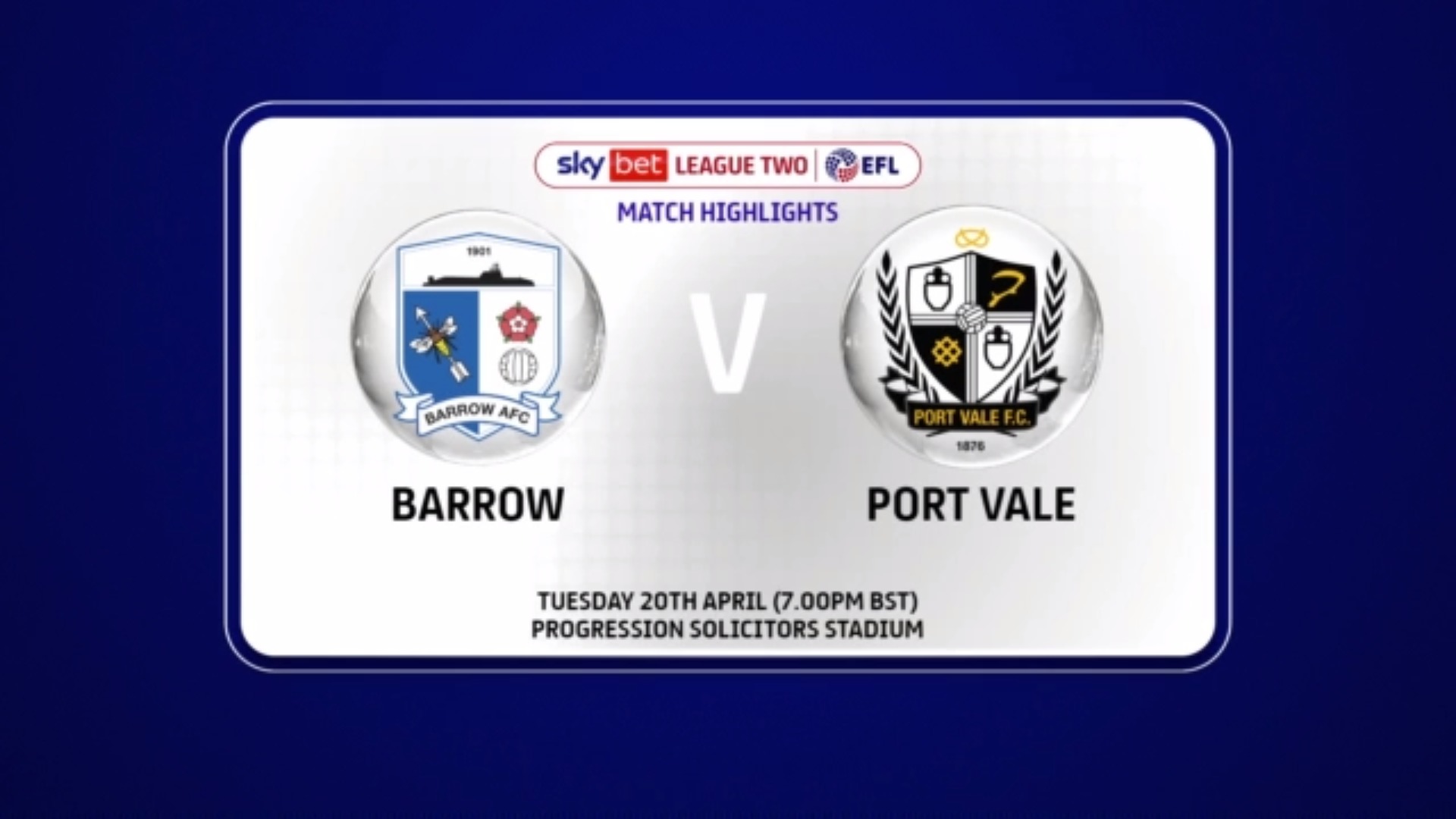 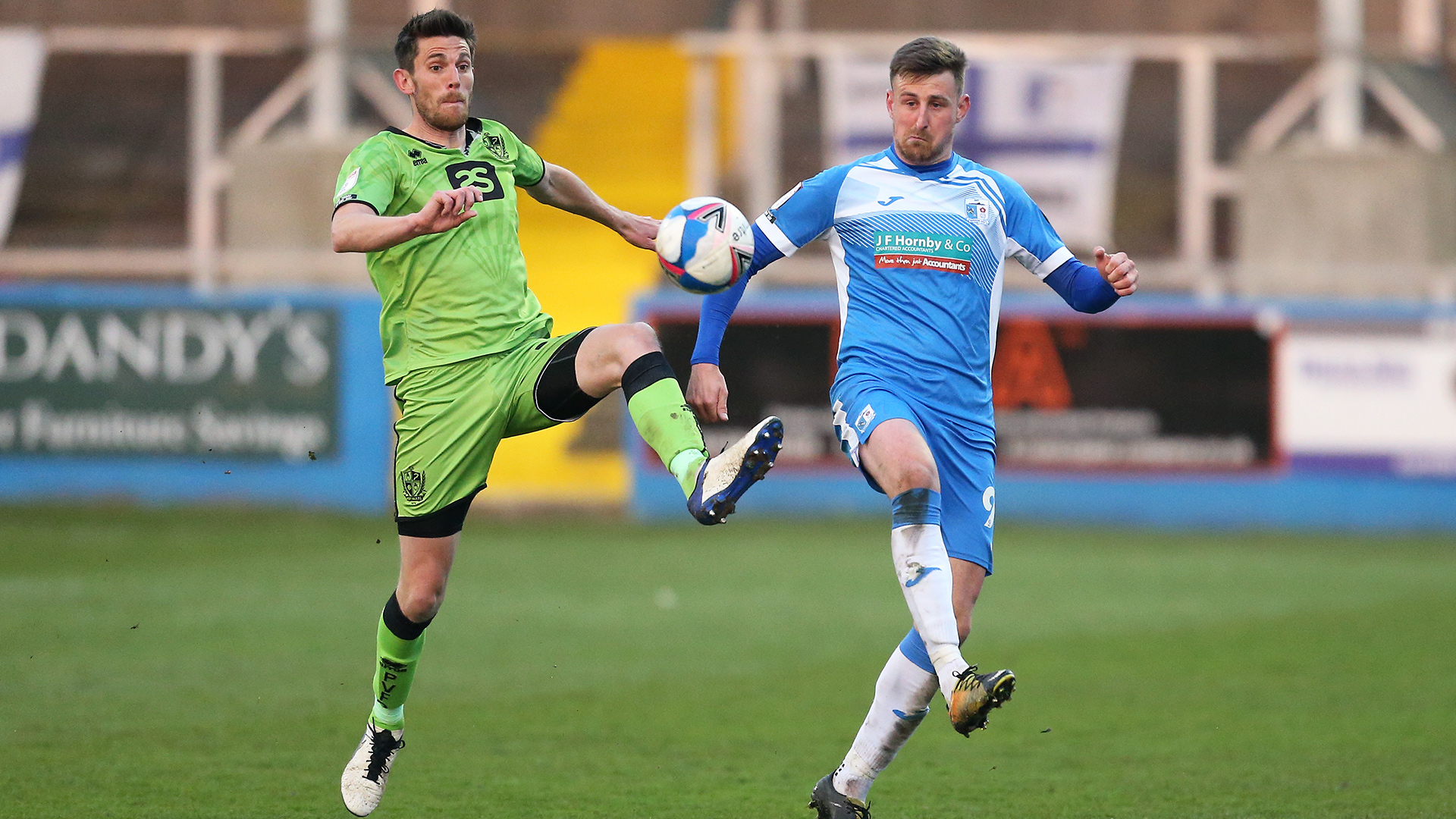