Take a look at everything you need to know ahead of Saturday's League Two trip to face Tranmere Rovers at Prenton Park.

In Opposition
Tranmere Rovers will still be holding on to some hope of snatching an automatic promotion spot this term following a confidence-boosting 1-0 win at Bradford City in midweek.

It was a much-needed victory for Keith Hill’s men who had drawn five of their last seven outings to slip slightly off the pace and they come into Saturday’s game sitting four points shy of the top three.

There remains some anger among supporters after they were relegated from League One on a points-per-game conclusion to last term and it would go somewhere to erasing that pain if they were to bounce back at the first attempt.

Hill has made a very positive impact since being appointed as boss in November and a brilliant start to 2021 saw them drive themselves right into the promotion race and the Birkenhead outfit will be hoping they can yet clinch that instant return by squeezing home in the final three games.

One To Watch
Jay Spearing’s experience in midfield could prove crucial for Tranmere Rovers during what is sure to be a tense run-in and potential play-off campaign.

The 32-year-old arrived at Prenton Park during the summer following his departure from Blackpool and has started all but three of Rovers’ League Two games this term.

A former Liverpool youngster, Spearing was restored straight into the starting eleven for Tuesday’s win at Bradford City after being shown a red card during the 1-0 defeat at Walsall seven days earlier.

Head To Head
Barrow and Tranmere Rovers have history stretching all the way back to the 1910/11 season and this weekend’s meeting will be the 104th in all competitions.

Rovers have the edge having tasted victory 41 times in comparison to The Bluebirds’ 37 wins but the last two encounters have both ended in 1-1 draws.

Barrow have lost on their last three visits to Prenton Park, including a 5-1 defeat in the 2016/17 FA Trophy but they have also won on The Wirral quite recently – a 1-0 triumph in October 2015 courtesy of Andy Haworth’s first half goal.

Referee
Marc Edwards will take in his third Barrow game of the season when he’s on the whistle for Saturday’s encounter with Tranmere Rovers at Prenton Park.

The official was last in charge of a Bluebirds fixture when he saw us defeat Cheltenham Town 3-0 just before Christmas, while was also in the middle for our Papa John’s Trophy game against Leeds United Under-21s in October.

Now into his second season on the EFL’s list of referees, Edwards’ last appointment was at Sincil Bank a fortnight ago when he saw Lincoln City draw 2-2 with Blackpool.

Betting
Tranmere Rovers have been installed as 5/4 favourites for three points this weekend, while Barrow can be backed at odds of 21/10 and the draw is priced up at 11/5 with our friends at Sky Bet.

We’re delighted that BBC Cumbria’s Adam Johnson is back behind the mic for our live stream of this weekend’s game and he will be joined by regular awayday summariser Mark Boyd.

Live Commentary
We will also provide an audio commentary of Saturday’s game as BBC Radio Cumbria team, Adam Johnson and Mark Boyd deliver coverage to fans all over the world via iFollow.

The former England international nodded the decisive goal midway through the second half to consign The Bluebirds to defeat and ensure they still need points in their fight for survival.

Tranmere began what was a scrappy first half on the front foot and Barrow were forced to defend in the early stages as the home side looked to get on top.

However, the hosts struggled to break down a resolute Bluebirds defence and Rob Kelly’s men began to feel their way into the game, almost forging in front when Luke James’ first long throw of the afternoon caused panic as it bounced on to the roof of the net.

The Barrow front man was proving a nuisance for the Rovers’ defence and a typically tenacious piece of play saw him rob the defender and prod a ball inside for Scott Quigley whose low shot was firm but straight at keeper Joe Murphy.

Clear cut chances were at a premium, but Barrow certainly started to get on top as half time approached, knocking the ball around with an increasing confidence in the Wirral sunshine.

Kgose Ntlhe was almost the unlikely source for the opening goal when he decided to let fly from thirty yards; a swerving shot skipped up awkwardly at keeper Murphy who did well to get his body behind it and block it away to safety.

Rovers boss Keith Hill clearly wasn’t happy and made a double change at the break, drafting in Otis Khan and David Nugent in an attempt to give his side a greater cutting edge.

Hill almost got the response he was after on 50 minutes when a right-wing corner was met powerfully by Peter Clarke but his goalbound header was brilliantly saved by Joel Dixon.

The hosts then put together a sweeping move down the right which saw Kaiyne Woolery get into the area and fire a low ball across goal which was sent just wide of the far post by Paul Lewis.

Rovers continued to ask questions with a higher tempo to their play but Barrow could have caught them on the counter-attack when Tom Beadling wriggled into the box and teed up Quigley but the front man sent his shot too high.

A minute later the home side went in front. Another good move down the right this time found Liam Feeney who whipped a cross into the box for Nugent who met it with a perfect glancing header which was past Dixon in a flash.

Nugent showed his quality again on 74 minutes when he collected a half-cleared corner on the left side of the area and send a curling shot beyond the diving Dixon but also just past the far post.

Dixon then produced a moment of class to keep it at 1-0 when Nugent crossed for Lewis and his header looked set to the goal until the Barrow keeper showed incredible reflexes and agility to tip it on to the cross bar and out.

Rob Kelly made a triple change with Calvin Andrew, Jamie Devitt and Dimitri Sea all introduced for the final ten minutes and Barrow did apply some pressure.

Banks went for the spectacular with a free-kick thirty yards out and, though he struck it well, it was always rising, and it flew off target as The Bluebirds slipped to defeat. 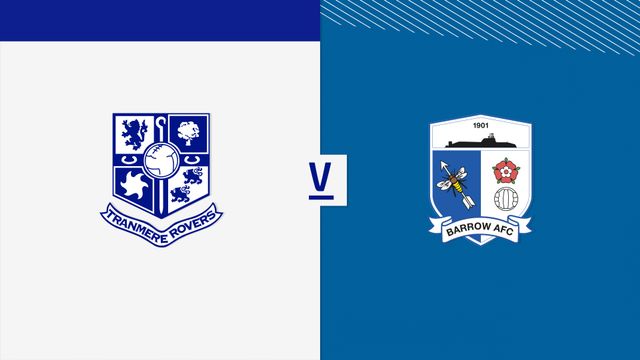 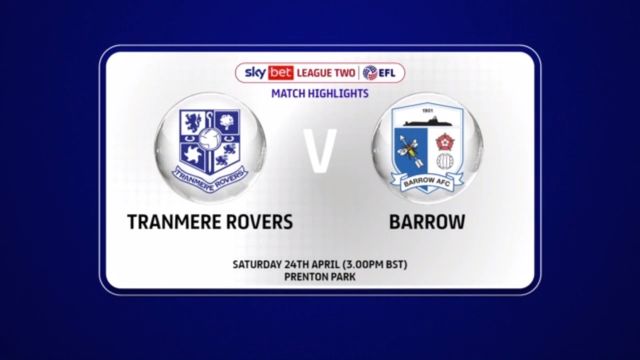 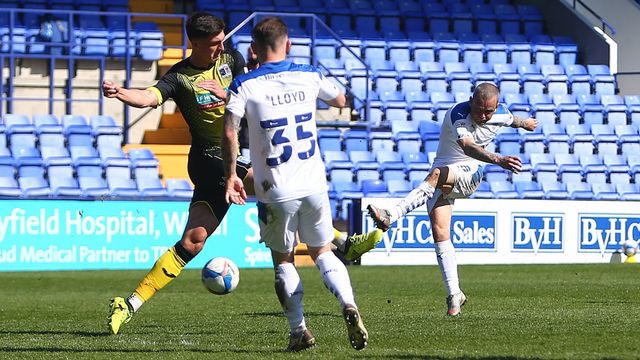