We take a look at everything you need to know ahead of The Bluebirds' final fixture of 2020 at The Progression Solicitors Stadium.

In Opposition
Tranmere Rovers found themselves relegated to League One in controversial circumstances last season as the EFL’s points-per-game model saw them finish in the drop zone despite hitting their best form of the season just before the lockdown.

The Birkenhead outfit made an inconsistent start to the new season and that cost Mike Jackson his job before the experienced Keith Hill arrived to steady the ship.

Tranmere were in great form during November but lost back-to-back league games at the start of this month, including a surprise 5-0 defeat at Exeter City.

However, Hill’s men reacted by running out 3-0 winners at his former club Bolton Wanderers in their next game only to fall to another unlikely 1-0 defeat at home to Bradford City on Boxing Day.

They are still within range of the play-off places though and hopes will remain that they can nudge themselves in to the promotion equation and challenge for a return to League One at the first attempt.

One To Watch
James Vaughan has been in excellent form this season so far after making a permanent move to Prenton Park during the summer on the back of a promising loan stint last term.

The well-travelled front man has already hit double figures in all competitions in 2020/21, netting his ninth League Two goal of the campaign in Rovers’ 3-0 win at Bolton Wanderers ten days ago.

A former Everton trainee, Vaughan made history in April 2005 when he became the Premier League’s youngest scorer when he notched for The Toffees against Crystal Palace whilst still 16.

Head To Head
This evening’s game will be the first meeting between the two sides since they shared a division in the 2017/18 National League campaign.

The game in Cumbria that year finished 1-1 when James Norwood’s last-minute goal rescued a point for Rovers just as it looked as though Byron Harrison’s early penalty was going to win it for The Bluebirds.

Barrow did beat them 2-1 when they came to our place towards the end of the previous season; Inih Effiong and Jordan Williams were on target as The Bluebirds came from behind to claim the victory.

Referee
James Bell will make his second visit to The Progression Solicitors Stadium this season when he’s the man in the middle for our meeting with Tranmere Rovers.

Bell also oversaw The Bluebirds during our Papa John’s Trophy defeat to Accrington Stanley earlier this term, which is his first on the EFL list of referees after being promoted from the National League.

His most recent appointment came on Boxing Day when he presided over Lincoln City’s 5-1 thrashing of Burton Albion in League One at Sincil Bank.

Tickets
A limited number of tickets were made available for this fixture and these are now completely SOLD OUT.

There will be no tickets available anywhere on matchday and supporters are strongly advised not to visit The Progression Solicitors Stadium unless they have a ticket for the game.

Betting
Barrow have been installed as slight favourites for three points at odds of 6/4, whilst Tranmere are just behind at a price of 13/8 and a draw is available at 23/10 with Sky Bet.

Live Streaming
Match Passes to watch the game against Tranmere Rovers live on iFollow Barrow are now available so that you can enjoy every minute of the action this evening.

Michael Jolley collected a point in his first game in charge as Barrow came from behind to draw 1-1 with Tranmere Rovers at The Progression Solicitors Stadium on Tuesday night.

The Bluebirds were behind midway through the first half to James Vaughan’s pinpoint header but Scott Quigley scored for the fourth game in succession to bring them level.

Barrow finished the game with ten men after a second yellow card for Harrison Biggins but they still held on to claim a point and extend their unbeaten run to three games at the end of 2020.

Jolley opted to make one change to his starting eleven, with fit-again Lewis Hardcastle handed his first start since October in place of Chris Taylor in The Bluebirds midfield.

After a slow start, it was Barrow who shoed their teeth first when Scott Quigley collected the ball back to goal, produced a wonderful turn and then sent a low shot on goal which looked destined for the bottom corner until a full-stretch intervention from keeper Scott Davies down to his right.

At the other end, Joel Dixon produced even greater heroics to deny James Vaughan. The ball dropped kindly to the Rovers front man just six yards out and he drilled a shot on goal which Dixon somehow managed to deflect over the bar much to the astonishment of players on both sides.

However, Dixon was powerless to stop Vaughan opening the scoring on 23 minutes when he got on the end of Liam Feeney’s whipped cross from the left and sent an unstoppable header in off the far post.

Barrow responded well to the setback and came close to levelling when Lewis Hardcastle almost marked his return from injury with a goal, only for his twenty-yard free kick to take a nick off the wall on its way in to the side-netting.

Quigley was proving a handful for the visiting defence and he got the space to let fly with another shot after great work from Connor Brown to win the ball high up the pitch, but again Davies was equal to the effort.

Barrow’s first opening of the second half was created by Hardcastle’s determined running down the left, taking the ball to the edge of the area and slipping it inside for Luke James but the forward dragged his shot wide of the near post.

The Bluebirds came agonisingly close to levelling when some great football saw Josh Kay get the ball to feet and drive a low cross in to the area where Biggins arrived to meet it at the front post but his effort was deflected just wide.

The equaliser arrived just after the hour when Quigley got hold of the ball back to goal ten yards out and, as he twisted and turned in an attempt to find an angle for a shot, he was fouled from behind by Rovers defender Sid Nelson and a penalty was awarded. The striker got to his feet, kept his composure and knocked home his fourth goal in as many games to bring Barrow level.

The joy on the terraces turned to anger moments later as a collision between Biggins and Vaughan off the ball led to the referee producing a yellow card for the Rovers man and a second yellow for the Barrow midfielder, reducing the hosts to ten. Jolley reacted by replacing James with Jason Taylor.

Tranmere were encouraged by the man advantage and could have gone in front again 11 minutes from time when Peter Clarke got on the end of a ball in to the box but again Dixon reacted well to pull off an excellent save.

Despite being up against it, Barrow could have stolen a winner themselves on 84 minutes when Tranmere failed to fully clear a ball in to the box and Hardcastle hit a stinging drive which Davies did well to parry and it was whacked away to safety. 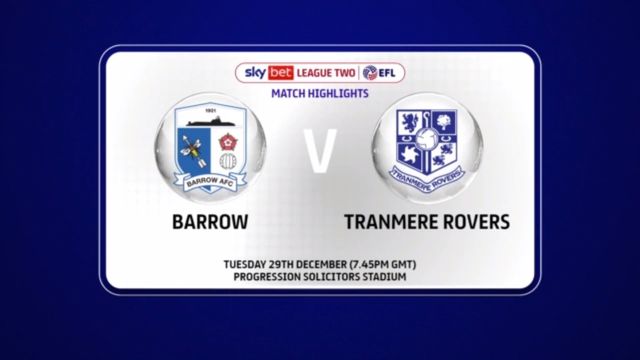 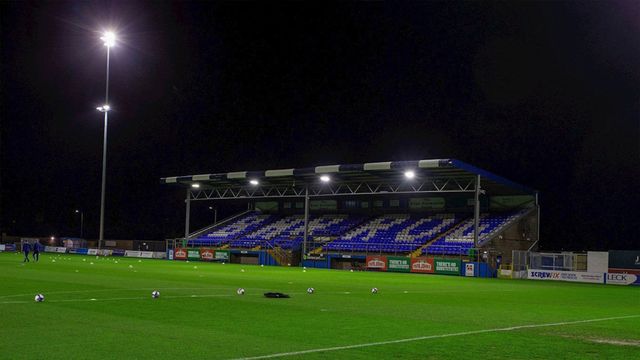