Take a look at everything you need to know ahead of kick-off at The People's Pension Stadium this weekend.

In Opposition
It’s been a bit of a mixed bag for Crawley Town so far this season, with the unpredictable nature of their results perhaps summed up best by their astonishing 6-5 FA Cup win at Torquay United last month.

The Red Devils have been irresistible on their day and have already thumped both Morecambe and Tranmere Rovers 4-0 on home soil so far this season.

However, John Yems’ men are currently in the midst of a run of six League Two games without a victory, stretching back to the end of October when they overcame Cambridge United 2-1.

They have been rewarded for defeating Barrow’s FA Cup conquerors AFC Wimbledon with a televised home tie against Leeds United at the start of 2021.

And the Sussex outfit will hope that they are on a better run of form in the league by the time they welcome Marco Bielsa’s men to The People’s Pensions Stadium in January.

One To Watch
Max Watters is reportedly already attracting Premier League attention after firing 12 goals since moving to Crawley Town following his release from Doncaster Rovers in the summer.

The 21-year-old is currently the leading scorer in English football after hitting the ground running in Sussex and further enhanced his growing reputation by scoring twice in the 3-3 draw at Mansfield Town.

Watters made a name for himself in non-league with the likes of Thurrock, Barking and Ashford United before turning professional with Doncaster in 2018.

He was snapped up by Town in October and he’s since found the net in all but four of his 14 outings for the club, leading to speculation of big money bids arriving in the January transfer window.

Head To Head
Saturday’s game will be the seventh competitive encounter between the two sides and there’s a real symmetry about the current head to head record with both sides having won twice and the other two games ending in draws.

It’s the first time Barrow have met Crawley Town since 2010/11 when The Reds enjoyed a 3-2 win on home turf after drawing 1-1 at Holker Street earlier in the campaign.

The Bluebirds have previous success in Sussex having triumphed 1-0 in the National League in October 2009 thanks to Jason Walker’s penalty fifteen minutes from time.

Referee
Neil Hair will take charge of his fifth Barrow game this weekend but his first since 2017 when he is on the whistle for our trip to Crawley Town.

The official was promoted on to the EFL’s list of referees for 2018/19 and last oversaw a Barrow fixture when we drew 1-1 at Dover at the start of the 2017/18 campaign.

Saturday’s game will be his 14th appointment of the current season with his last outing coming at Gillingham last weekend as they ran out 2-0 winners over Swindon Town in League One.

Betting
Crawley Town have been installed as 11/8 favourites for three points this weekend, while Barrow are rated a 9/5 shot for victory and a draw is priced at odds of 23/10 with our friends at Sky Bet.

Live Commentary
We will also provide an audio commentary of this weekend’s game when we link up with BBC Radio Cumbria with Adam Johnson and Mark Boyd who will describe all the action as it unfolds.

Ten-man Barrow fell to a fourth successive League Two defeat as the country’s top scorer Max Watters struck a hat-trick to help Crawley Town celebrate the return of their supporters with a win.

It could have been so different after goals from Josh Kay and Sam Hird had cancelled out Watters’ first goal to see The Bluebirds lead early in the second half.

However, Watters’ second coupled with a red card for Connor Brown meant it became an uphill task and Tom Nichols’ late penalty put the home side in front before Watters added gloss in injury time.

David Dunn reverted to three at the back for the trip to Sussex, with Hird restored to the centre of the defence and Jason Taylor coming back in to the engine room.

After defending an early Crawley free-kick, Barrow settled in to the game quicker and began to dominate possession in the early stages without engineering too much to trouble home keeper Glenn Morris.

Josh Kay looked particularly dangerous on the ball and he had the first real effort on goal after cutting in from the left but his powerful strike flew way too high.

Scott Quigley was next to try his luck when he turned inside on to a Connor Brown throw-in to hit a speculative left-footed shot which was claimed by Morris.

Midway through the half though, it was Crawley who struck first. A neat combination of passes released top scorer Max Watters through on goal and he confidently slid home his 13th goal of an impressive campaign.

The Bluebirds reacted positively though and were straight on the front foot once more and the lively Jayden Reid struck a shot just over the bar on the spin after good work from Quigley on the left.

Just after the half-hour Brown ghosted past his defender brilliantly and went in to the box where he had his ankles clipped. The referee initially looked to have brought play back for an earlier free-kick but, after consultation with his linesman, he pointed to the spot. Kay saw his penalty saved by the keeper but it ballooned up in the air and the winger was able to get there first to volley home the rebound to level things up.

The Red Devils almost snatched back their lead a couple of minutes later when Watters got space on the right of the area but this time his low drive was well parried away by Joel Dixon.

At the other end, Matty Platt made good contact with a deep delivery from the right but his strong header was directed just wide of the left-hand post.

There was a real intensity to The Bluebirds at the start of the second half and they went in front within five minutes when Kay’s inswinging corner was glanced home at the front post by Sam Hird to give Barrow the lead.

However, Town responded well to the setback and began to put Barrow under pressure once more at the other end and as the hour approached they levelled it. A cross in to the box was met by Tom Nichols and when his header came back off the bar, Watters was in the right place to fire home his second goal.

It got worse for Dunn’s men midway through the second half when Brown went in to a challenge which was deemed worthy of a second yellow card and Barrow were reduced to ten men.

Barrow kept on working and created a wonderful chance to go back in front when substitute Dior Angus flicked the ball on for Quigley but his powerful drive was finger-tipped over the bar.

Nine minutes from time the decisive moment arrived. Town substitute Ashley Nadesan’s eyes lit up as the ball dropped on the edge of the box and Matt Platt lunged in to block the shot only to make contact with the striker and concede a penalty. It was tucked away by Nichols.

Barrow showed some spirit and could have been back on level terms had someone gambled on Angus’ whipped low ball across the edge of the six-yard box.

As it was, the hosts made sure of the points in injury time when Nadesan sprung the offside trap to race clear and set-up Watters who couldn’t miss from close range to complete his hat-trick. 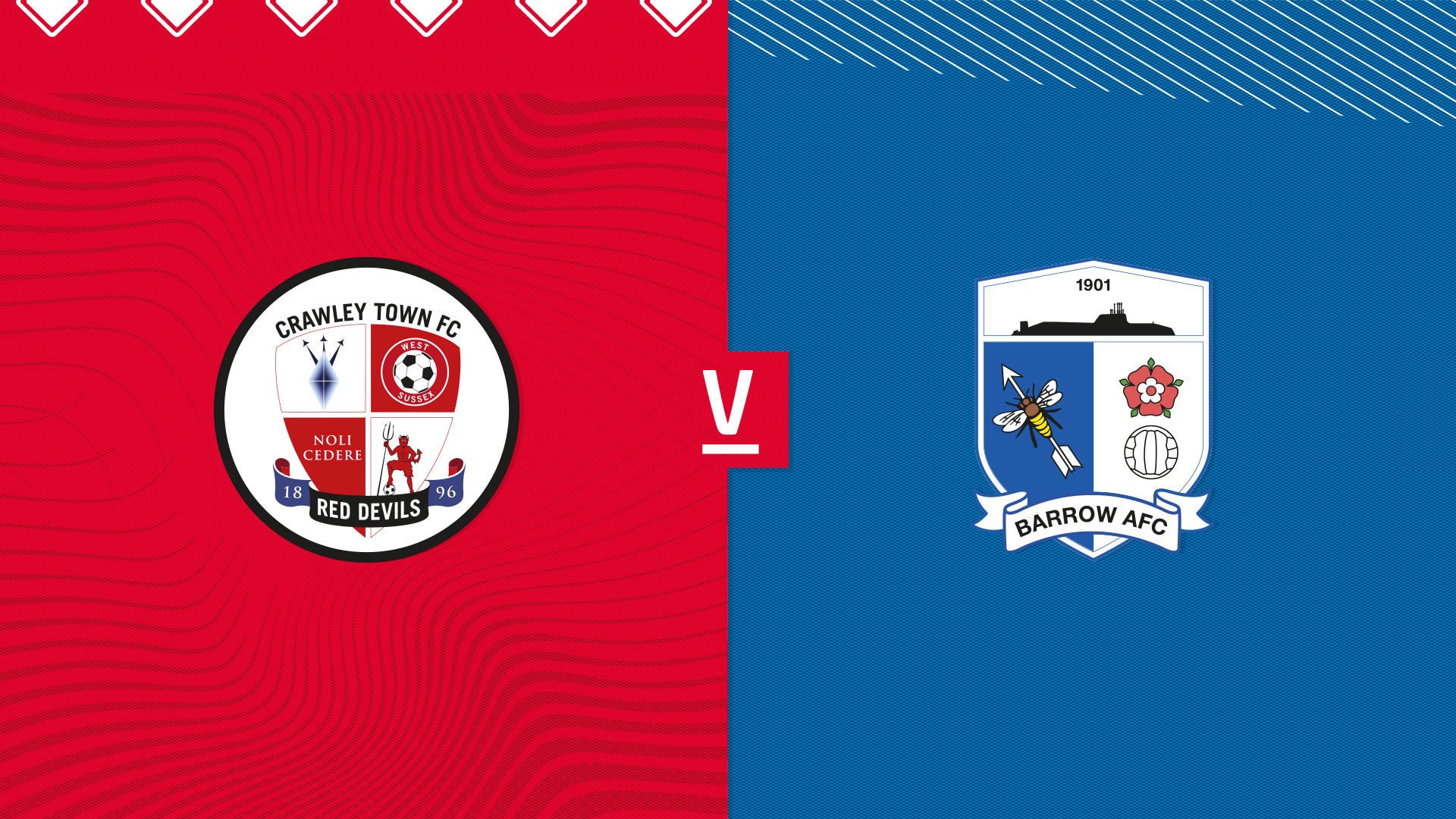 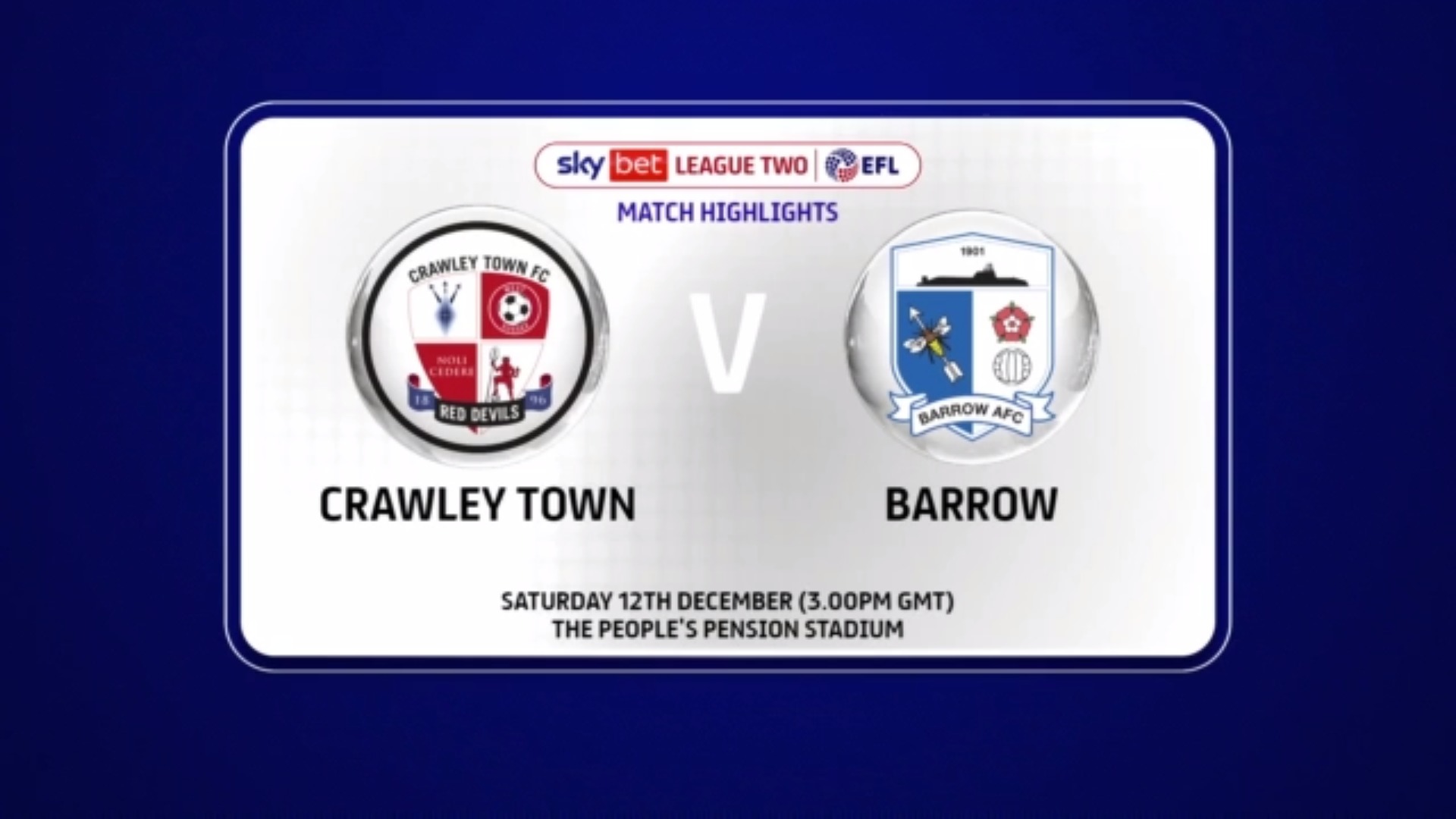 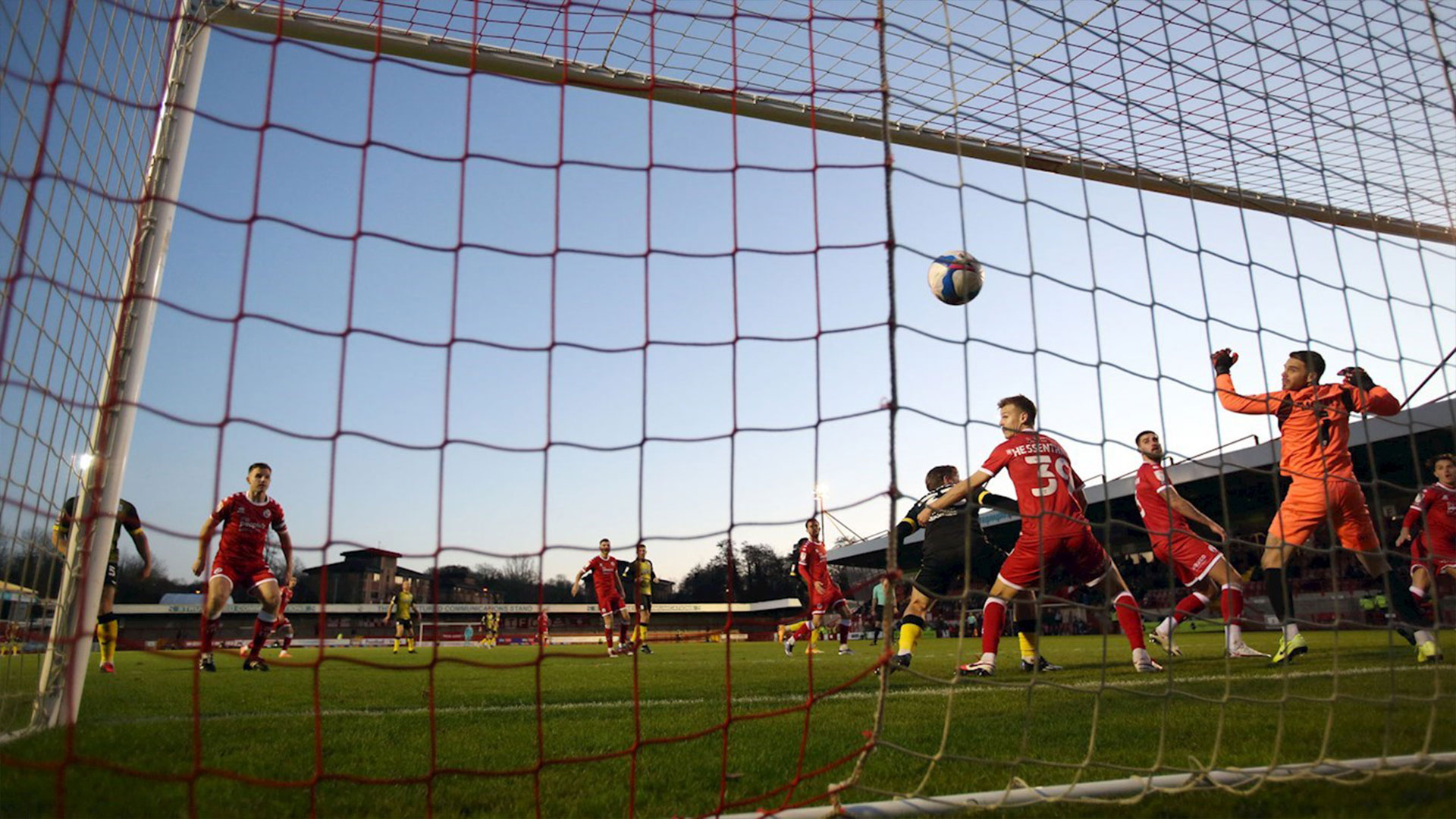