Take a look at everything you need to know ahead of our Boxing Day visit to Vale Park.

In Opposition
Port Vale enjoyed an excellent start to the 2020/21 campaign and were sitting pretty in the play-off positions at the end of October on the back of four wins from five in League Two.

However, John Askey’s men have struggled to maintain that level of consistency in the weeks that have followed and come in to this weekend’s game with just one league win their last nine outings.

A ridiculous 6-3 win at Bolton Wanderers at the beginning of the month boosted confidence, but Vale have since drawn back-to-back home games and lost 4-3 at Walsall last time out despite taking a 2-0 first half lead.

Fans will be hoping they can rediscover their best form over the festive period and go in to the New Year with renewed hope of a return to League One for the first time since 2017.

One To Watch
Front man Devante Rodney has run in to some great form in recent weeks and looks one of Port Vale’s main threats ahead of Barrow’s Boxing Day visit to Vale Park.

The 22-year-old powerhouse signed for The Valiants during the summer following his release from Salford City and has fired five goals in his last ten appearances.

Blessed with strength, pace and a keen eye for goal, Rodney broke through in to senior football with Hartlepool United after coming through the ranks at Manchester City and Sheffield Wednesday.

Head To Head
Saturday’s game will be the 17th competitive encounter between the two clubs but the first since they shared a division back in the 1966/67 campaign.

On that occasion it was Vale who had the better of it, winning 2-1 on home turf after taking a point in a 2-2 draw from their visit to Barrow earlier in the season.

The Bluebirds’ last victory over Vale came back in February 1938 – that 3-0 home triumph is one of only two wins we have managed in this fixture.

Referee
Samuel Barrott will take charge of his second Barrow game of the campaign when he’s on the whistle for our Boxing Day trip to Vale Park.

Bluebirds fans may remember he was on the whistle for our 1-1 draw with Colchester United at The Progression Solicitors Stadium in the opening month of the season.

He’s overseen 13 games in all competitions so far in 2020/21, his most recent coming at Boundary Park just over two weeks ago when he saw Sunderland beat Oldham Athletic in the Papa John’s Trophy.

Betting
Port Vale have been installed as 21/20 favourites for three points on Boxing Day, with The Bluebirds rated a 12/5 shot and the draw also priced up at 12/5 with our friends at Sky Bet.

Live Commentary
We will also provide an audio commentary of this weekend’s game when we link up with BBC Radio Cumbria with Adam Johnson and Mark Boyd who will describe all the action as it unfolds.

Barrow produced one of their most solid performances of the season at Port Vale to clinch a second successive win and impress new boss Michael Jolley who was there to watch on Boxing Day.

It was a commanding display from The Bluebirds who outmuscled and outthought their hosts to claim a comfortable three points and build on last weekend’s excellent win over Cheltenham Town.

Scott Quigley, who bullied his former team at times, helped himself to the first goal midway through the first half before Patrick Brough added a second after the break to ensure a very happy Christmas for Barrow fans.

Rob Kelly opted to go with a completely unchanged line-up for the trip to Staffordshire as new boss Jolley watched on from the stands at Vale Park.

Barrow enjoyed some good early possession without really troubling the Vale goal, while the hosts came close when danger man Devante Rodney turned inside from the right but drilled a shot just wide.

Whilst it was the hosts who then began to dominate the ball, it was The Bluebirds who stole in front midway through the half. Quigley did brilliantly to get in behind the Vale defence, showed great strength to hold off his opponents and then slotted a calm finish underneath Scott Brown to make it 1-0.

Barrow grew in confidence as the half wore on and began to look the more likely, Matt Platt came close to doubling the lead when he got on the end of Josh Kay’s free kick but he nodded it wide at the far post.

Quigley had the taste for it now and he looked full of intent when he collected the ball 35 yards from goal and drove forward but his shot flashed far too high to trouble Brown.

Barrow could have grabbed another goal right on half time when Kay’s wicked free kick to the far post again picked out Platt but the defender’s powerful volley flew over the bar.

Vale made a change at the break as David Amoo was introduced and he looked a threat within minutes when he clipped a low shot across goal and just wide from the edge of the box.

However, Barrow got the second goal when Quigley spun in the area to find Harrison Biggins and his inviting low ball across left Patrick Brough with the simple task of turning it home from close range.

You could then see confidence among the Barrow players and they came close to adding a third on the hour when some good football freed Quigley through on goal but Brown produced a brilliant save to deny the front man.

While there was an increasing desperation about Vale’s attacking, Barrow continued to look a threat on the break and Kay nearly made it 3-0 midway through the second half when he cut inside from the left but he powered his shot over the bar.

There was also some determined defending on show for Barrow as they ensured they made it as difficult as possible for their hosts, highlighted when Burgess’ shot was well blocked when he weaved in to a little bit of space on the edge of the area.

Chances were at a premium for John Askey’s side through and, in the end, Barrow got their victory over the line with a minimum of fuss to collect back-to-back wins for only the second time this term. 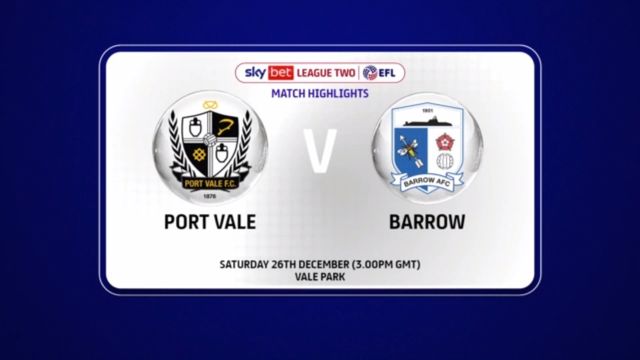 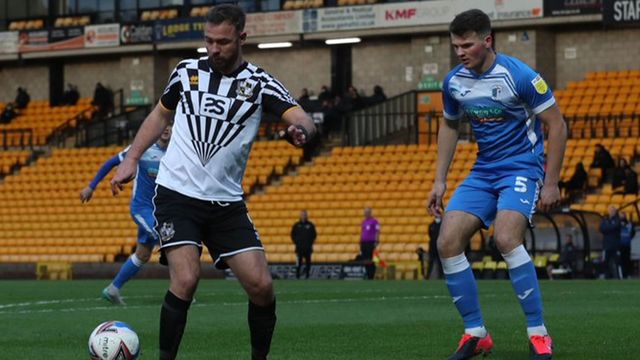