We bring you everything you need to know ahead of Saturday's League Two visit to The University of Bolton Stadium.

In Opposition
After a sluggish start to the new campaign following relegation, Bolton Wanderers have recovered to drive themselves in to contention towards the top end of the League Two table.

Ian Evatt suffered a frustrating start to his tenure as the Club lost its first five matches under his watch and long-suffering Wanderers fans had to wait until November for the side to really click into gear.

A run of five straight wins helped lift them clear of danger back then but it’s been their most recent sequence of five victories from six which has pushed them to the brink of the top seven.

Evatt’s men are one of the form sides in the division right now and, due to the congested nature of the table, are now only eight points off top spot and will be fancying their chances of having a big say in the promotion race if they can maintain their momentum.

One To Watch
Eoin Doyle is looking for a second successive promotion from League Two after firing the goals that helped propel Swindon Town to the title last season.

The 32-year-old Irishman has certainly proved he knows where the net is throughout a career which took off at Chesterfield and has seen spells at Cardiff City, Preston North End and Bradford City, among others.

Doyle has a dozen league goals to his name this term for The Trotters, including one in the midweek win over Scunthorpe United, so keeping his quiet is going to be a big part of the battle on Saturday.

Head To Head
Saturday’s game will be only the fourth competitive meeting between the sides in history and the first in Bolton since an FA Cup tie back in January 1991 which Wanderers won 1-0.

Prior to that, the only other time the side had me was in the 1911/12 Lancashire Senior Cup when then top flight Bolton not only knocked us out but also went on to win the competition that season.

Last October saw the first ever league meeting when The Bluebirds raced in to 2-0 and 3-1 leads at The Progression Solicitors Stadium only for The Trotters to grab a point in injury time in a 3-3 draw.

Referee
There will be plenty of experience behind the whistle on Saturday as former Premier League referee Bobby Madley takes charge for our visit to The University of Bolton Stadium.

Madley, who returned to refereeing at the start of last year, is regarded as one of the best on the circuit at EFL level and has overseen 20 games in all competitions during 2020/21.

He was the man in the middle for our 2-2 draw with Walsall at The Progression Solicitors Stadium in October, while his most recent outing came in midweek when he saw Grimsby Town beat Crawley Town 2-1.

Betting
Bolton Wanderers have been made 5/6 favourites for three points this weekend, while Barrow are out at 3/1 for victory and a draw is priced up at 5/2 with our friends at Sky Bet.

Live Commentary
We will also provide an audio commentary of this weekend’s game as we link up with Bolton Wanderers for their live coverage, due to BBC Radio Cumbria being prevented from travelling due to COVID-19 restrictions.

Shaun Miller’s goal deep into injury-time broke Barrow hearts as The Bluebirds were beaten in the cruellest of circumstances on their first-ever league visit to Bolton Wanderers.

The Bluebirds were organised and committed from the first whistle at The University of Bolton Stadium and rarely allowed their hosts to create too much in the way of clear cut opportunities, while also looking a threat on the break at times.

They looked well placed to pick up a richly deserved point on their travels only for substitute Shaun Miller to capitalise on a rare moment of space to rifle home the only goal right at the death.

Kelly made one change to his starting line-up as Bobby Thomas came in at the back to replace Tom Davies, while Josh Kay was on the bench after shaking off the hamstring trouble which kept him out of the midweek win at Oldham.

The game began at a high tempo with both teams keen to knock the ball around but also work hard to regain possession which made for an entertaining encounter.

Chances were at a premium, but Luke James saw plenty of the ball in the opening stages, making some intelligent runs and giving the Wanderers backline something to think about.

The Bluebirds settled well and were on top for a period just after the quarter-hour mark, making inroad particularly down the right wing but without bringing home keeper Matt Gilks in to action.

The hosts then responded with a couple of corners which Barrow defended solidly, before Declan John swung a ball in from the left which Eoin Doyle headed wide of the far post.

Wanderers began to grow in authority and Lloyd Isgrove whipped a testing cross in to the front post which was again well defended by Barrow, while at the other end Scott Quigley fired over with an ambitious effort from long range on the right.

Joel Dixon was called upon to make a solid save seven minutes before the break when The Trotters worked the ball in to Oladapo Afolayan on the edge of the box and he cleverly got a yard to shoot but the Bluebirds keeper got down well to hold the drive.

The biggest chance of the first period then fell to Barrow. Quigley did superbly to tease his way past a defender into the right of the box and he fed a low ball across into the path of the arriving Jason Taylor who directed a side-foot effort on target only for Gilks to claw it away excellently.

Bolton responded with a swift counter-attack which freed the dangerous Antoni Sarcevic on the right of the area, but his deep cross was fingertipped away by Dixon and then Neal Eardley pounced on the loose ball to clear before Doyle could react.

Barrow began the second half in confident fashion and almost stole in front three minutes when they picked Bolton off on a break led by Quigley. He found Brough charging beyond him but the defender was dispossessed as he attempted to cut back inside on his left foot and the hosts survived.

Wanderers immediately looked to get on the front foot themselves and a good move saw Kieran Lee fed in on the right side of the box but his powerful shot was blocked.

The home side got even closer ten minutes after the restart when a cross from the right was glanced away by Bobby Thomas but landed at the feet of Sarcevic at the far post only for his powerful volley to be well dealt with by Dixon.

Bolton continued the carry the greater threat as the half wore on but Barrow were working tremendously hard to keep them at bay; Doyle tried his luck at the end of a decent move but his shot was easily fielded by Dixon.

Wanderers boss Ian Evatt spun the dice with a double change as Arthur Gnahoua and Nathan Delfouneso were introduced with 20 minutes left and the latter could have made an impact five minutes later after turning in the area, but his shot was into the midriff of Dixon.

Barrow caught Bolton out with a quickly taken free kick and it was played into the path of Quigley on the right side of the area, but he could only hit the side netting from a tight angle.

However, the drama unfolded at the other end three minutes in to injury time as Barrow failed to clear their lines and Miller rifled home the decisive goal from close range. 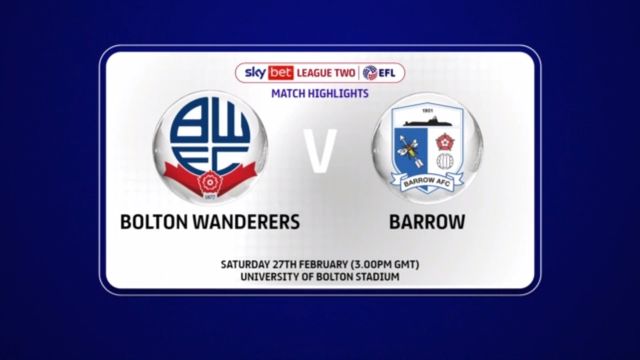 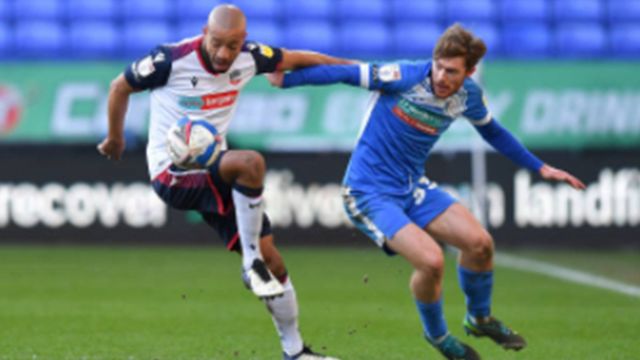