Take a look at everything you need to know ahead of this evening's League Two action at The Peninsula Stadium.

In Opposition
Salford City enjoyed a confidence boosting win over league-leaders Cambridge United last time out as The U’s were beaten 4-1 at The Peninsula Stadium a week ago.

The Ammies convinced Richie Wellens to leave Swindon Town in November to help spearhead their efforts to win promotion to League One and last week’s victory keeps them right in the frame.

Ambitions at the club need little explaining and Wellens – who won the division with The Robins last term – is tasked with the responsibility of taking them to the next level as quickly as possible.

Prior to the destruction of Cambridge, City had actually been going through a period of inconsistent results having won just one of their six games since the turn of the year.

However, they remain in ninth place ahead of tonight’s game and the congested nature of the table means another victory could see them knocking on the door of the automatic promotion spots.

One To Watch
Ian Henderson moved in to double figures for the season when he scored twice in Salford City’s brilliant 4-1 win over Cambridge United last time out.

The veteran front man is City’s top scorer so far this season and if he can continue his recent form during the run-in then The Ammies could yet have a big say in the promotion picture.

Signed from Rochdale during the summer, Henderson’s acquisition has proved a shrewd one and he’s started every league game for the club this season.

Head To Head
Tonight’s game will be just the fourth time the two clubs have met in competitive action and Salford City have the slight edge having won two of the previous encounters.

The sides first shared a division in 2018/19 when both results went with home advantage in the National League but The Ammies ran out 1-0 winners at The Progression Solicitors Stadium earlier this season thanks to Ash Hunter’s spectacular strike.

Referee
Trevor Kettle will referee his first Barrow game of the season tonight when he’s on the whistle for our League Two encounter with Salford City.

The experienced official is now into his 18th season on the EFL list of referees and is among the most well known and respected on the circuit.

Kettle has overseen 21 fixtures across the competitions so far this term, his most recent appointment coming on Saturday when he saw Bolton Wanderers earn a 1-0 win over Stevenage.

Betting
Salford City have been installed as 4/5 favourites to take three points tonight, with Barrow rated a 16/5 shot for victory and the draw priced up at 5/2 with our friends at Sky Bet.

Live Commentary
We will also provide an audio commentary of the game as we link up with Salford City for their live coverage, due to BBC Radio Cumbria being prevented from travelling due to COVID-19 restrictions.

Barrow were beaten by a single goal at The Peninsula Stadium on Tuesday night as Ian Henderson’s first half goal was enough to hand Salford City all three points.

The City front man pounced on an error from young centre-back Bobby Thomas to fire the decisive goal as The Bluebirds return to action ended in defeat to The Ammies.

Michael Jolley opted to make three changes for the game, with Brad Barry returning from a hamstring injury to feature for the first time since December while Luke James and Lewis Hardcastle were both restored to the starting line-up.

After a quiet opening to the encounter, it was Salford who got on the front foot first when Ash Hunter arrived on to a ball on the edge of the box but he fired wide on the stretch.

At the other end, Neal Eardley came agonisingly close to putting Barrow in front in spectacular fashion. A corner was cleared 30 yards from goal where the Bluebirds defender struck a wonderful dipping volley which had City keeper Vaclav Hladky backstepping as it grazed the roof of the net on its way over.

Ian Henderson bought himself a yard to shoot with a clever turn on the right side of the area but his subsequent shot flashed across the goal and wide of the far post.

However, the veteran front man couldn’t miss on 29 minutes when Bobby Thomas miscued a pass on the edge of his area and Henderson chased in to smash home his fourth goal in three games to give The Ammies a lead.

Barrow responded positively and a patient passage of football saw the ball worked from right to left for Patrick Brough who whipped a cross through the box to the arriving Eardley who attempted a shot on the half volley, but he couldn’t keep it down.

The Bluebirds suffered a blow on the hour when Lewis Hardcastle hobbled off with an injury, though that did allow Mace Groodridge to come in for his debut in the centre of midfield.

And the on-loan Burnley star produced a wonderfully deft touch to feed a ball over the Salford defence for Scott Quigley but the striker could only flash a shot across goal.

Thomas, who propelled a series of dangerous long throws in to the home side’s box, found himself out on the right to whip in a brilliant cross to James at the front post but the front man’s glancing header was excellently turned round the post by Hladky.

Barrow threw caution to the wind as time wore on and Michael Jolley threw Mikael Ndjoli on for his debut to try and add extra firepower but the hosts continued to frustrate with some solid defending as they saw the game out. 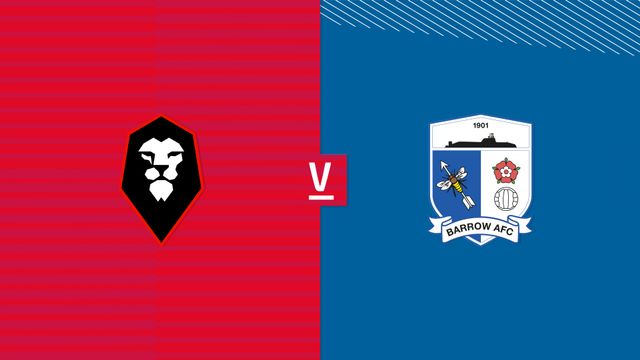 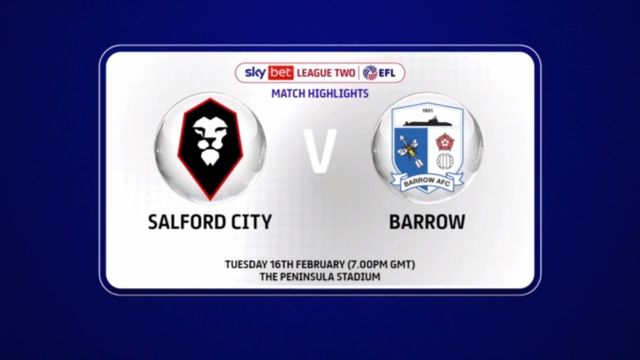 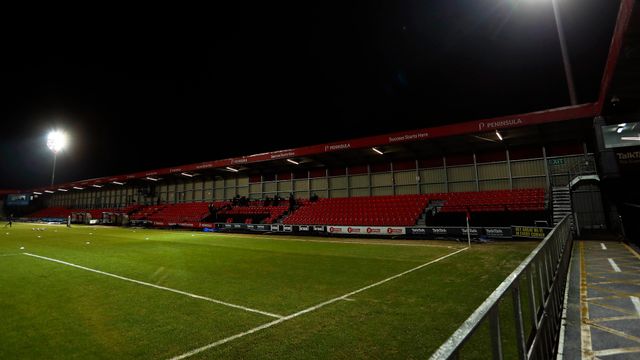