Take a look at everything you need to know ahead of Saturday's big game at The Progression Solicitors Stadium.

In Opposition
Scunthorpe United are still looking to fully recover from a slow start to the new season and arrive in Cumbria this weekend sitting just one place and three points above Barrow in the League Two table.

The Iron turned to one of their own during the summer when Scunthorpe-born Neil Cox returned to the club where he came through the ranks to take charge following the departure of Paul Hurst.

However, they managed just one win and were beaten six times in their first eight league outings of 2020/21 before picking up some improved form in the middle of November.

Wins at Oldham Athletic and Port Vale were backed up by an eye-catching 5-2 triumph at Harrogate Town at the beginning of December as they began to climb the table.

However, they have now lost four of their last five matches ahead of the weekend – the latest an agonising defeat at home to Salford City on Tuesday night when the visitors grabbed a late winner.

One To Watch
Abo Eisa was on target with a well taken goal when Scunthorpe United ran out 2-1 winners over Barrow at Sands Venue Stadium last month.

The 25-year-old has been with The Iron since August 2019 when they paid Shrewsbury Town an undisclosed fee to secure the services of the talented attacker.

Eisa has hit the net four times in the National League so far this season – more than any other Scunthorpe player – so will need to be closely watched by Barrow’s backline this weekend.

Head To Head
This Saturday’s game will be the 24th competitive meeting between the two sides and it’s Scunthorpe who have the edge historically having won 13 times in comparison to Barrow’s six wins.

Prior to the game at Sands Venue Stadium just before Christmas, you had to go back to the 1971/72 campaign for the last time Barrow and Scunthorpe shared a pitch.

The Iron have won five of the last six meetings between the sides, with The Bluebirds’ last victory coming back in May 1968 when they triumphed 2-1 on home soil thanks to goals from Dave Storf and Bobby Knox.

Referee
James Adcock will referee his first Barrow game in almost a decade when he’s the man in the middle for Saturday’s encounter with Scunthorpe United.

You have to go back to a 2-1 FA Cup defeat to Rotherham United on home soil in November 2011 for Adcock’s last appointment at The Progression Solicitors Stadium.

The experienced official has overseen 11 fixtures so far this term, his most recent outing coming at The Sixfields Stadium when Northampton Town defeated Fleetwood Town 1-0 at the beginning of December.

Betting
Barrow have been made 11/10 favourites for three points this weekend, with Scunthorpe United rated a 23/10 shot for victory and the draw also priced up at 23/10.

Live Streaming
Match Passes to watch Saturday’s game live on iFollow Barrow are now available so that you can enjoy every minute of the game against Scunthorpe United.

Josh Kay’s fourth goal of the season saw Barrow get back to winning way with a battling triumph over Scunthorpe United at The Progression Solicitors Stadium.

The winger’s classy finish across the keeper just before the hour mark proved the game’s decisive moment as The Bluebirds moved level on points with the visitors near the base of a congested League Two table.

Michael Jolley moved to a back four and made three changes to his starting eleven as Neal Ardley was handed a debut at right-back, James Jones returned in central defence and Harrison Biggins was restored to the centre of midfield after suspension.

A scrappy start to the game set the tone for the first half, though Matt Platt had a half chance when he got on the end of Eardley’s left-wing corner, but he couldn’t force the ball home and the visitors smuggled it clear.

Eardley’s delivery from free-kicks and corners was a feature of the opening period, and another deep ball into the box from the debutant found Platt in space but he could only prod a volley wide, though the offside flag spared his blushes.

Barrow began to grow into the game as it went on and enjoyed more possession, putting together a decent move down the left to free Josh Kay but his fierce delivery took a deflection and found its way into the hands of Iron keeper Mark Howard.

Some more good football involving Luke James, Scott Quigley and Biggins saw the latter teed up to swing a searching ball into the far post where Kay arrived on the slide but just couldn’t apply the finishing touch.

The second half started in equally sluggish fashion but burst into life on 58 minutes when a ball down the right found James who did well to hold it up before feeding it into the path of the onrushing Biggins. The midfielder charged into the box and then knocked it square for Kay to fire a clinical finish into the bottom corner of the net for 1-0.

Barrow lost James to a nasty looking head injury midway through the second half and, after a long stoppage for treatment, it was the visitors who looked to get on the front foot.

First Jem Karacan let fly with a sweetly struck volley from the edge of the area which was well held by Dixon, before the midfielder then nodded wide at the far post after more good play from The Iron.

The recovery mission got harder for the visitors with four minutes of normal time remaining when Junior Brown – already on a booking – got involved in an off-the-ball tussle with Quigley and the referee showed him a second yellow.

Scunthorpe could have levelled almost immediately afterwards though when Abo Eisa found space on the right side of the box, but his low drive was well parried by Dixon and Barrow were able to clear.

However, The Bluebirds had to negotiate a whopping 15 minutes of injury-time to see it through to the full-time whistle and celebrate their first three points of 2021. 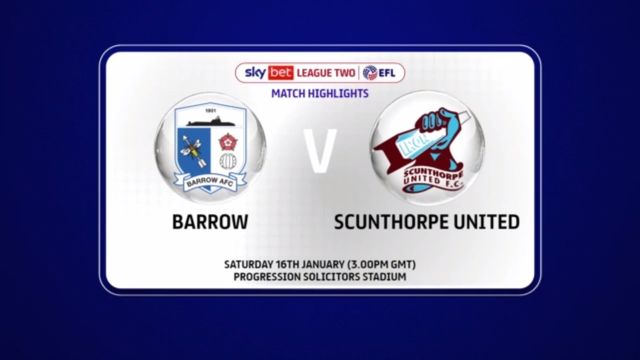 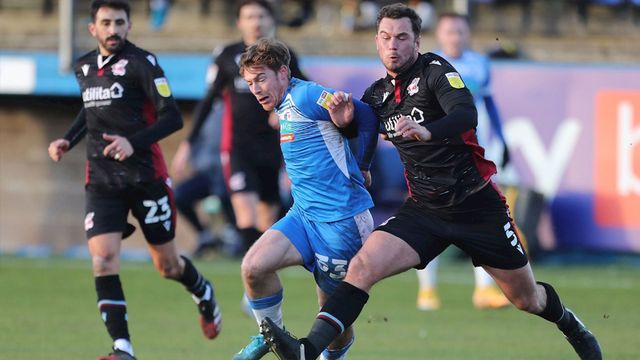