We turn our attentions to Saturday's League Two action with a full and in-depth preview of The Bluebirds' trip to The Utilita Energy Stadium.

In Opposition
Bradford City are in the midst of a remarkable recovery from a poor start to the 2020/21 campaign which cost boss Stuart McCall his job in the middle of December.

McCall left the club after a sixth straight defeat against Oldham Athletic last month, but caretaker duo Conor Sellars and Mark Trueman have overseen an astonishing upturn in form since then.

The pair are unbeaten in seven games - and the four victories celebrated in that time is already more than The Bantams had achieved in their previous 16 League Two outings.

With Lee Novak out for at least another month with knee trouble, City have moved into the transfer market to sign three strikers during the January window – including former Barrow pair Danny Rowe and Andy Cook.

City fans will hope that firepower can help push them up the table away from danger and perhaps even see them make a late dash towards the top seven during the second half of the campaign.

One To Watch
Danny Rowe has already hit the net twice against Barrow this season having grabbed a brace for Oldham Athletic as they ran out 4-3 winners at The Progression Solicitors Stadium in November.

The 31-year-old former AFC Fylde hitman, who was on loan at Barrow in 2016 and 2017, made the move to Bradford City last week and scored his first Bantams goal in their 3-1 win at Southend United on Tuesday.

An enigmatic front man who is not afraid to shoot from any angle or distance, Rowe will need to be marshalled well this weekend if Barrow want to return from West Yorkshire with reward.

Head To Head
Saturday’s game will be the 49th competitive meeting between the two clubs and it’s Bradford who have enjoyed the better of it historically having won 21 times in comparison to Barrow’s 14 triumphs.

Indeed, The Bluebirds’ 1-0 win back in October which came courtesy of Connor Brown’s early goal was the first time we’d beaten The Bantams in six attempts dating back to the 1965/66 season.

Barrow’s last trip to Bradford proved a fairly eventful affair as the sides shared the Division Three spoils at the end of a 3-3 draw in April 1970.

Referee
Antony Coggins will take in his first Barrow game of the season this weekend when he’s the man in the middle for our trip to Bradford City.

The official, who has been on the EFL’s list of referees since 2017/18, has overseen 14 games so far this term, mainly across League One and League Two.

His most recent appointment came at Portman Road last Saturday when he presided over Peterborough United’s 1-0 defeat of Ipswich Town.

Betting
Bradford City have been installed as slight 13/10 favourites for three points this weekend, with Barrow available at a price of 19/10 and the draw rated a 23/10 shot with our friends at Sky Bet.

Live Commentary
We will also provide an audio commentary of this weekend’s game as we link up with Bradford City for their live coverage, due to BBC Radio Cumbria being prevented from travelling due to COVID-19 restrictions.

Barrow were narrowly beaten on their return to action as Bradford City extended their unbeaten run to eight games with a 2-1 victory at The Utilita Energy Stadium on Saturday.

Former Bluebirds loan man Danny Rowe was again on target but Scott Quigley’s penalty brought Barrow level only for Callum Cooke to strike the decisive blow for the hosts early in the second half.

Boss Michael Jolley handed out three debuts for the game, throwing Ollie Banks, Tom Davies and Bobby Thomas straight in to the fray for the encounter in West Yorkshire.

The Bantams began the game with a real intensity and won their first corner within two minutes which was well defended by Barrow with Anthony O’Connor charging to get on the end of it.

However, a long ball forward to Danny Rowe provided City’s new signing with a chance and, after feigning to shoot on this right foot, he cleverly chopped inside on his left and rolled a clinical finish across Joel Dixon and into the bottom left-hand corner to make it 1-0 on five minutes.

Josh Kay and Scott Quigley both made inroads at the other end as Barrow offered a response, but the home side almost doubled their lead on 11 minutes when Callum Cooke stung the palms of Dixon with a well struck drive.

The Bluebirds slowly began to regain their composure and came agonisingly close to levelling on 19 minutes when the ball was fed along the edge of the box to Josh Kay who took a touch before stroking a low shot beyond keeper Sam Hornby only to see it come back off the base of the post.

The Barrow star had another opportunity to shoot just a couple of minutes later when Patrick Brough’s header across the box fell kindly to Kay but this time some excellent City defending ensured his low drive was blocked.

Perhaps the best chance of the half went to Quigley on the half hour as a flighted ball over the top sent him through on goal. However, having neatly rounded keeper Hornby, the front man could only fire a low shot into the side netting from a tight angle.

The Barrow breakthrough arrived nine minutes before the interval when Brough sent a ball in to Quigley just inside the box and he looked to spin and get a shot away before being pulled down by a defender. The referee was well placed to award the penalty and Quigley made little fuss from the spot, sending Hornby the wrong way to level the game at 1-1.

The Bluebirds were first to get on the front foot after the break as Lewis Hardcastle found room to let fly from 25 yards inside 60 seconds of the restart, but his effort was dragged wide of the target.

However, that served only to sting the home side into action and on 49 minutes they worked the ball wide on the left to Gareth Evans and his low ball into the box was met on the penalty spot by Cooke and he guided it beyond the helpless Dixon to restore City’s lead.

Callum Wood could have put further distance between City and Barrow just before the hour mark after wriggling into a dangerous area on the edge of the box, but he then dragged his shot wastefully wide of goal.

Jolley rolled the dice a little on 73 minutes when he introduced both Dan Bramall and Jamie Devitt to the action to try and give his side a greater cutting edge as they searched for a second equaliser in the closing stages.

With time against them, Barrow piled on the pressure as Bradford opted to sit deep and defend their lead – Bobby Thomas could have made them pay when he ghosted in on the end of a Neal Eardley delivery, but the youngster headed over the bar from six yards.

Quigley was then sent clear by a clever header from Devitt, but the front man was put under severe pressure by recovering defenders as he sent a deflected shot wide and there were calls for a penalty in the aftermath, which were dismissed by the referee. Kay’s protests earned him a yellow card.

Barrow continued to dominate possession but a levelling goal evaded them and it was the hosts who were left to celebrate the three points. 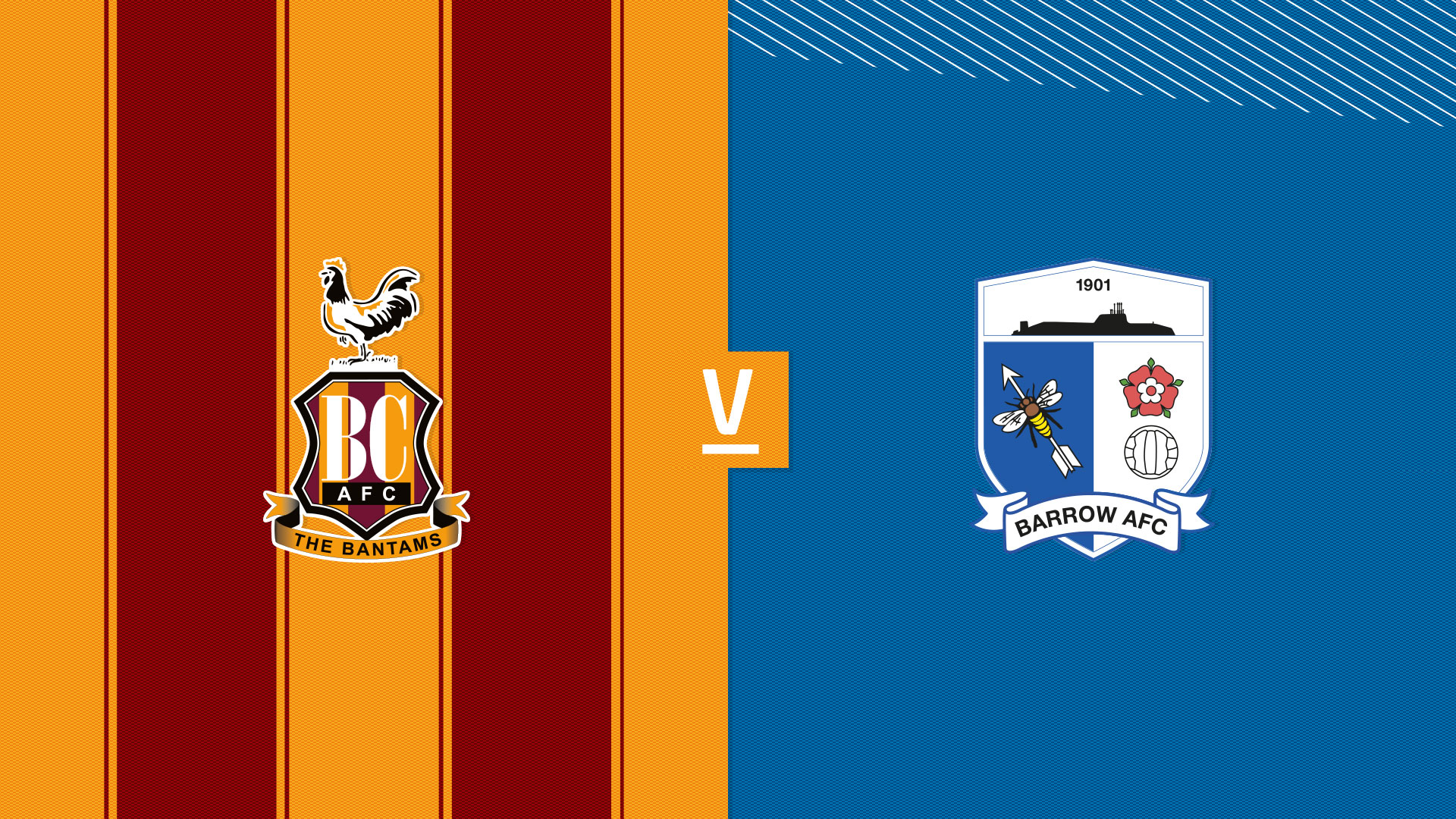 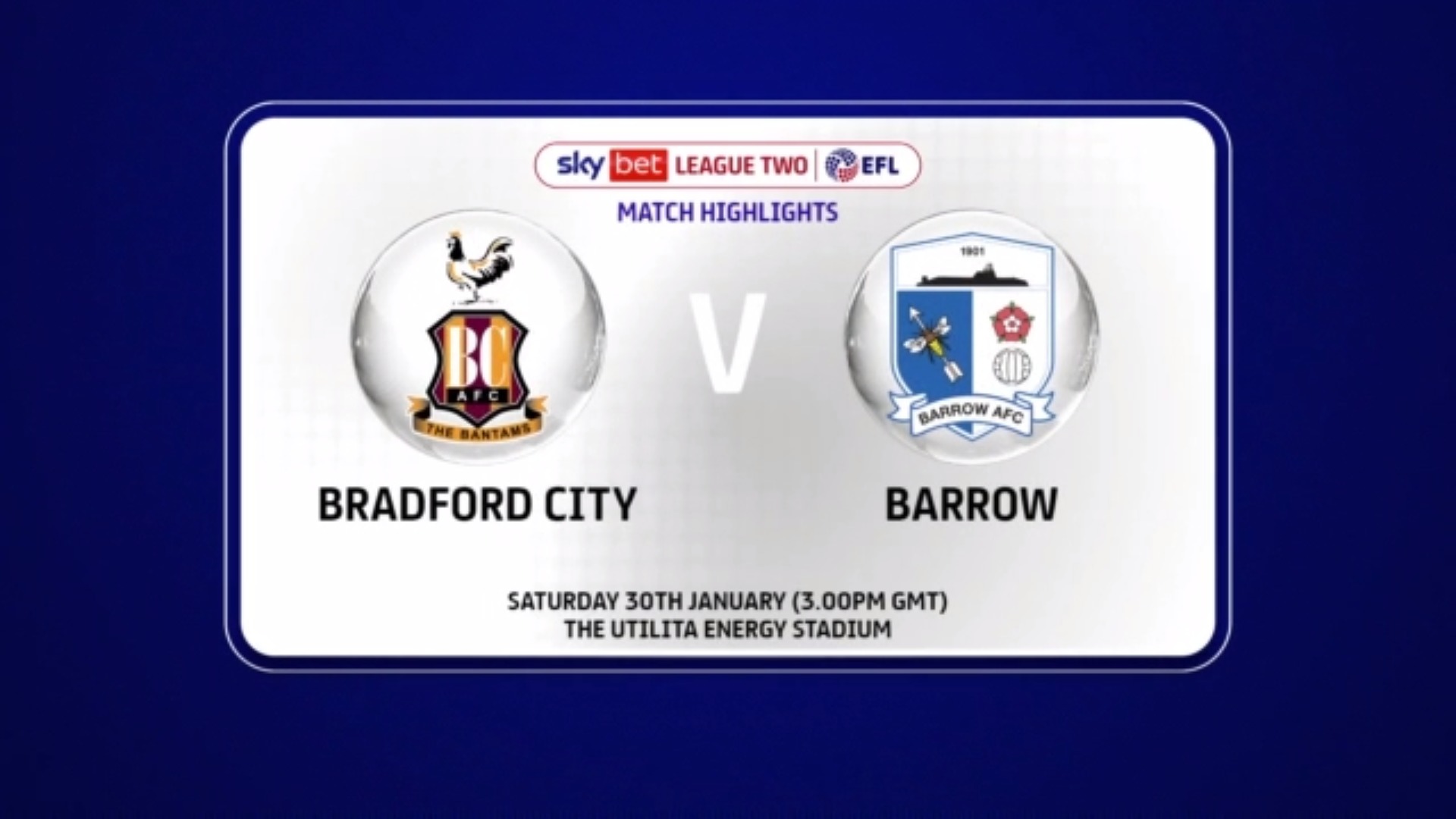 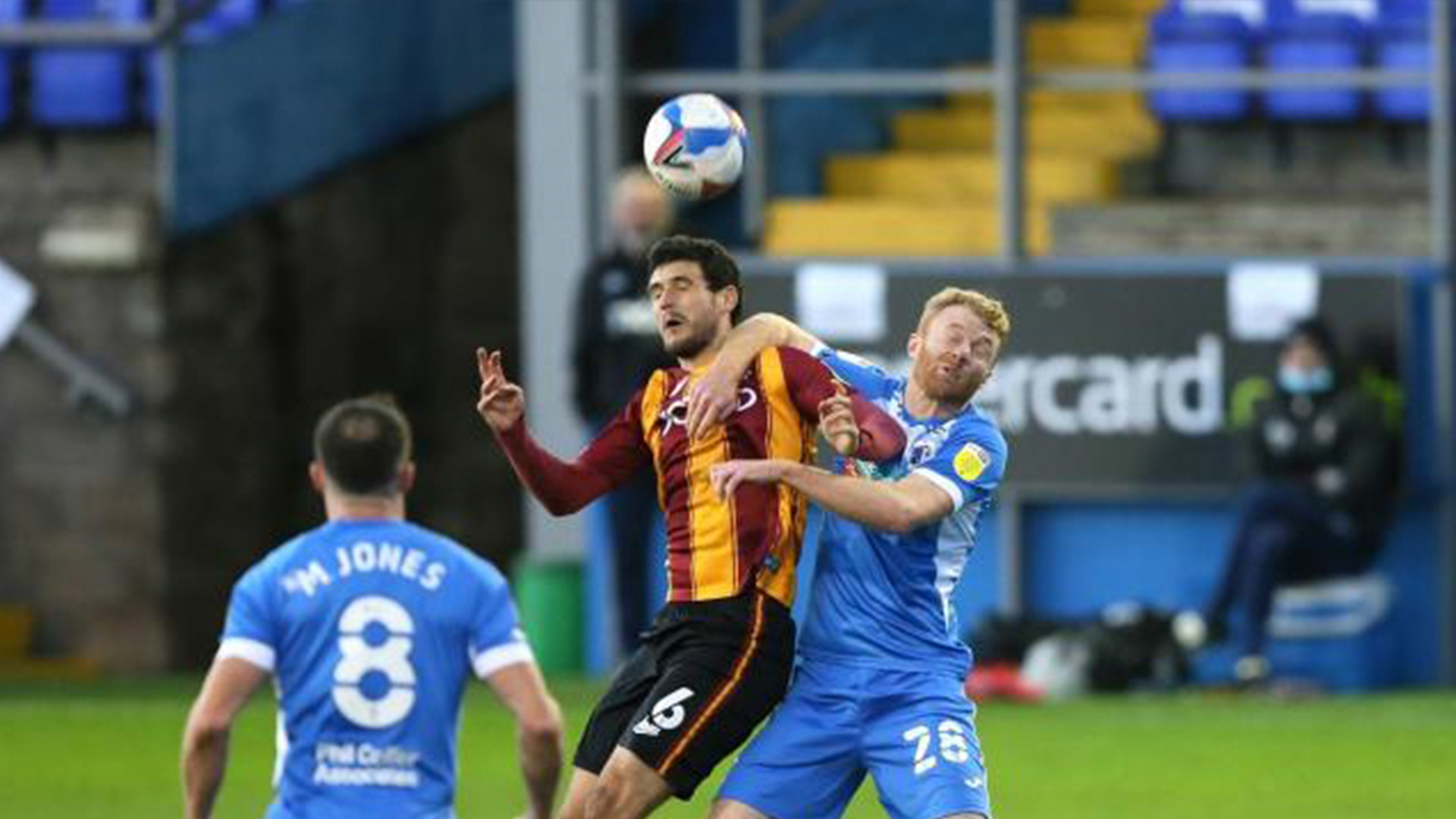