We turn our attentions to the weekend with a full and in-depth preview of Crawley Town's visit to The Progression Solicitors Stadium.

In Opposition
The play-offs seemed a long way off for Crawley Town just a month ago as a run of just one point from a possible 12 was capped by defeat at home to Stevenage.

However, John Yems’ men have rallied impressively since then and have tasted defeat just twice in their last eight League Two outings to creep right back into contention for a top seven spot.

They couldn’t quite make it four victories in a row in midweek at home to Walsall but Tom Nichols’ last minute penalty which salvaged a point in 1-1 draw could yet prove crucial in the final reckoning.

Town are 10th in the table ahead of Saturday’s visit to Barrow but are now just five points adrift of the top seven and have a game in hand on three of the four teams currently occupying the play-off zone.

One To Watch
Tom Nichols held his nerve to rescue a late point for Crawley Town on Tuesday night when he converted a penalty in their 1-1 draw with Walsall.

The front man has taken on an extra layer of pressure in recent weeks following the departure of Town’s top scorer Max Watters to Cardiff City during the January transfer window.

However, his partnership up front with former Carlisle United man Ashley Nadesan has been a source of encouragement for Crawley fans and Nicholls has hit the net four times in his last six games.

Head To Head
There’s not a lot in it when you look at the seven past meetings between the sides, with Barrow having won twice and Crawley enjoying victory on three occasions.

The Red Devils have won two of the last three meetings, including their 4-2 triumph at The People’s Pension Stadium earlier this season.

Barrow claimed the only away win this fixture has produced when Jason Walker’s late penalty earned three points for The Bluebirds at Crawley in October 2009.

Referee
Scott Oldham will return to The Progression Solicitors Stadium this weekend, having also refereed our historic first game back in the Football League against Stevenage in September.

Now in to his fourth season as an EFL referee, Oldham has presided over 24 games so far this term – most recently the goalless draw between Salford City and Colchester United at The Peninsula Stadium on Tuesday.

Betting
Barrow have been made 29/20 favourites for three points on Saturday, with visitors Crawley installed as a 7/4 bet for victory and a draw priced up at 9/4 with Sky Bet.

Live Streaming
Match Passes to watch Saturday’s game live on iFollow Barrow are now available so that you can enjoy every second of the action as we go up against Crawley Town.

Live Commentary
We will also provide an audio commentary of Saturday’s game when we link up with BBC Radio Cumbria who will describe every kick from our clash with The Red Devils.

The Bluebirds looked like having to settle for a point as the visitors twice levelled following goals from Tom Davies and Quigley.

However, Barrow never gave up – and they get their rewards in dramatic fashion right at the end as Quigley bundled the ball home from a corner to secure another priceless win.

Barrow seemed to settle better in the opening stages and could have gone in front on seven minutes when Luke James got in down the Crawley left but Glenn Morris raced from his line to produce a smart save.

The Town keeper was powerless to stop The Bluebirds going in front a couple of minutes later though. Ollie Banks hung an inviting right-wing corner in to the edge of the six-yard area  and Tom Davies barged his way on to it and powered a bullet header past Morris to give Barrow the lead.

Rob Kelly’s men were well on top after the goal and Morris had to make a reaction save down to his left to turn away Banks’ goalbound volley after the visitors had only half cleared Bobby Thomas’ dangerous long throw-in.

Thomas himself then got on the end of another good corner from Banks but the young centre-back saw his header drop just wide of the back post.

Crawley began to feel their way back into the game as the first half wore on and were back on level terms on 31 minutes when Tom Nichols made a great run in behind and did superbly to control a long ball forward. Looking up, the front man had the presence of mind to square the ball into George Francomb’s path and he swept it past Joel Dixon to level the game up at 1-1.

Scott Quigley almost restored The Bluebirds lead almost immediately as Kelly’s side got on the front foot immediately from the restart, but the front man drove a left-footed effort across goal and wide.

However, Quigley get on the scoresheet on 36 minutes when the referee was well placed to see Thomas being fouled in the area and Barrow’s top scorer rammed home his ninth goal of the season into the roof of the net from the penalty spot.

Town came out with aggression in the second half and came close to grabbing another equaliser on 54 minutes when Joe McNerney met a right-wing corner with his head but the effort flashed wide of the far post.

James then scampered away down the left on to Brad Barry’s pass and drove inside the area to let fly with a low shot, but Morris got right behind it to gather comfortably.

With a strong wind behind him, Banks was encouraged to have a go from a 35-yard free kick and his low effort took a deflection off a defender which made it tricky for Morris, who did well to react and save it.

The game seemed to be trundling towards a victory for Barrow as time wore on with Kelly’s men dealing with most of what Crawley had to offer. However, the visitors finally found a way through on 84 minutes when a cross was clipped to the far post and Jack Powell stooped to head in the leveller.

The Bluebirds caused havoc in the Crawley area with a deep free kick which found Thomas, but his shot was saved by the keeper and cleared before Banks’ long-range drive was well blocked by the Town defence.

And just as it looked as though the points would be shared Quigley spun on the edge of the area and brought an incredible full stretch save from Morris to turn it behind for a corner. The ball was flashed across from the set-piece to the back post where Quigley got the decisive touch to bundle it into the net for a precious winning goal. 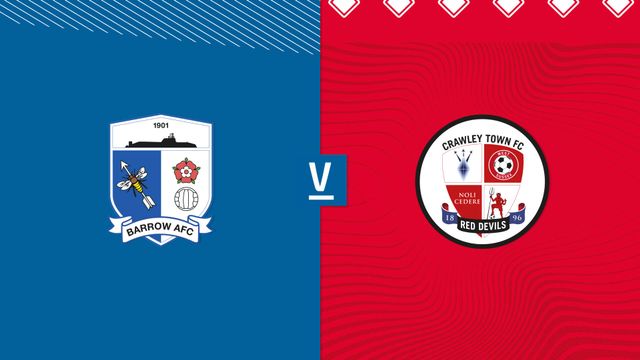 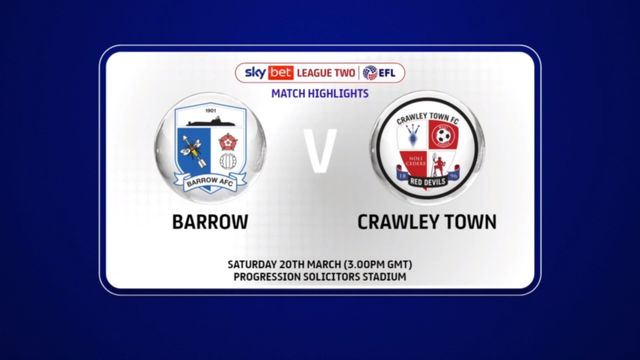 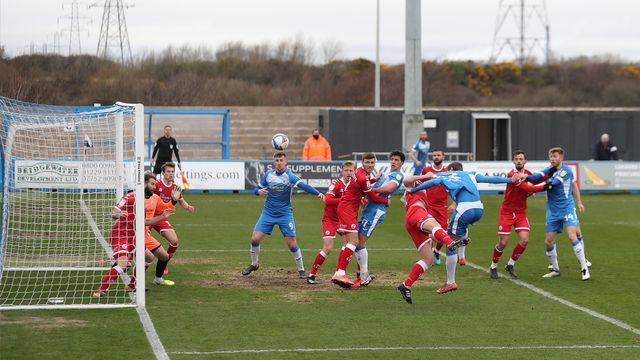