In Opposition
Mansfield Town have recovered to a position of relative safety in the League Two table after enduring a terrible start to the 2020/21 campaign.

Their poor form in the opening months cost former boss Graham Coughlan his job following Barrow’s 4-2 triumph at One Call Stadium at the end of October.

Nigel Clough arrived as his successor and had an immediate impact at the club, tasting defeat just once in his first nine games in all competitions as The Stags began their charge.

Their form over the festive period was particularly eye-catching as Clough’s men put together five consecutive league wins to shoot up from 20th to 13th in the League Two table.

More recently, victories have been harder to come by for Town and they arrive in Cumbria this weekend looking to get back to their best after a disappointing run of four defeats from their last five.

One To Watch
Jordan Bowery is closing in on double figures for the season after scoring the only goal in Mansfield Town’s win over Morecambe last weekend.

The 29-year-old’s form was crucial as they put together an excellent run over Christmas and in to the New Year to drive themselves away from the danger zone at the bottom of League Two.

Bowery has enjoyed a solid first season in Town colours since joining from MK Dons during the summer and he’s a player The Bluebirds will need to keep a close eye on this weekend.

Head To Head
Saturday’s game will be the 58th competitive meeting between the sides and it’s been tightly contested over the years with Mansfield winning 24 times in comparison to Barrow’s 22 victories.

The Stags had enjoyed the better of it in recent times and The Bluebirds’ brilliant 4-2 win at One Call Stadium in October brought to an end a run of four Mansfield triumphs in this fixture.

It’s also a game which has tended to produce its fair share of goals in recent years – the last five encounters alone have seen the ball hit the net an astonishing 31 times.

Referee
Experienced official Carl Boyeson will take charge of his first Barrow game of the season when he’s on duty at The Progression Solicitors Stadium on Saturday.

Boyeson is closing in on two decades as an EFL referee and has so far overseen 20 games across various competitions during the 2020/21 campaign.

His most recent outing was also in Cumbria – he was on the whistle at Brunton Park last weekend as Oldham Athletic ran out 3-1 winners over Carlisle United.

Betting
Mansfield Town have been installed as slight favourites for three points at odds of 11/8, while Barrow aren’t far behind on 15/8 and the draw is rated an 11/5 shot.

Live Streaming
Match Passes to watch Saturday’s game live on iFollow Barrow are now available so that you can enjoy every second of the action as we go up against Mansfield Town.

Live Commentary
We will also provide an audio commentary of Saturday’s game when we link up with BBC Radio Cumbria who will describe every kick from our clash with The Stags.

Patrick Brough fired a second half double as Barrow claimed three precious points by completing their first double of the season with victory over ten-man Mansfield Town.

The win was built on another afternoon of hard work from The Bluebirds and it proved enough to hoist Rob Kelly’s men out of League Two’s bottom two.

Brough struck twice within three second half minutes to produce the knockout blow for The Stags, who had earlier been reduced to ten men after

Caretaker boss Kelly opted to make four changes to his starting eleven as Jamie Devitt and Chris Taylor were given the nod in midfield, while Josh Kay and Tom Davies returned from illness and injury respectively.

It was Devitt who produced the first effort on goal of the afternoon as he strode forward into the Mansfield half and let fly from thirty yards but his shot was dragged wide of the target.

In truth though, there were more whistles from the referee than moments of drama in the opening 20 minutes as both sides probed for an opening in a tightly contested encounter.

Devitt provided a bit of inspiration just after the half-hour when he dropped a teasing free-kick on to the edge of the six-yard box which Scott Quigley got on the end of but could only prod wide of the post.

Mansfield responded with a good chance of their own as the ball was swung into the penalty area from the left and skipper Ollie Clarke arrived six yards out to meet it with his head but he sent it wastefully over the bar.

Good work from Jordan Bowery set strike partner Jamie Reid through on the Barrow goal but Joel Dixon darted quickly from his line to go down bravely at the striker’s feet before the Bluebirds were able to just about clear the loose ball as Bowery loitered with intent.

There was a tentative start to the second half too; Devitt tried his luck once more from a free kick 25 yards out but this time the wall did its job and Town were able to clear.

The visitors then came close to opening the scoring when Harry Charsley unloaded from long-range but Dixon watched it all the way and produced a good fingertip save.

There was drama midway through the second half when Quigley turned cleverly away from Ryan Sweeney on the edge of the box and the Stags defender was shown a second yellow card to reduce the hosts to ten men.

No sooner had Nigel Clough’s side adjusted to that setback when keeper Aiden Stone went down injured and they were forced to bring on back-up stopper Marek Stech.

Quigley produced a wonderful pass to set Patrick Brough into the box on the left hand side and he fed the ball inside to Jason Taylor who had plenty of the goal to aim at but sent his shot wide of the far post.

Mansfield responded with some good football of their own at the other end as Kellan Gordon exchanged passes with Jamie Reid to move inside from the right before curling a shot just wide of the far post.

The Bluebirds got their noses in front on 74 minutes when Town failed to deal with a long ball forward and, as the defender took a heavy touch, Brough picked his pocket and ran through to slip a tidy finish under substitute keeper Stech and strike a vital blow for the hosts.

It was a blow Mansfield struggled to recover from and Barrow went further in front just two minutes later when a ball in from the right was misjudged by a Stags centre-back and Brough was there once again to ram home a second from close range.

Quigley could have added further gloss to a much-needed win on 89 minutes when he bullied his way into the penalty area only to see his low drive really well held by Stech down to his left.

The front man tested Stech again in injury time when he drove in to the right side of the box to draw another good parry from Stech, with Brough coming agonisingly close to prodding the rebound home for what would have been an unlikely hat-trick. 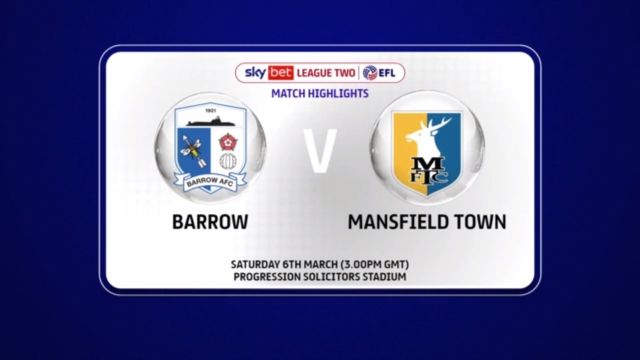 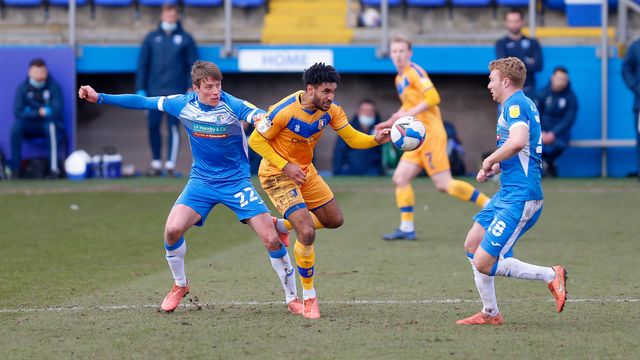