Take a look at everything you need to know ahead of Southend United's weekend visit to The Progression Solicitors Stadium.

In Opposition
Southend United arrive at The Progression Solicitors Stadium this weekend knowing that they must win to keep alive hopes of retaining their place in the EFL.

The Shrimpers currently sit 23rd in the table but they are six points behind Scunthorpe United and Colchester United, both of whom have superior goal difference.

It means that Phil Brown’s men must collect six points from their two remaining games and hope for an eight-goal swing to jump above one of their rivals and escape relegation.

Southend will travel to Cumbria with an eye on completing a League Two double over The Bluebirds having run out 1-0 winners when the sides met at Roots Hall in January.

One To Watch
Southend United will be hoping Ricky Holmes can produce the creative spark to help them pull off a great escape in the remaining two games of the season.

The versatile forward signed for The Shrimpers in February following a spell with Northampton Town, returning to the club where he initially came through the ranks.

Holmes has over 300 senior games under his belt in the EFL and his vast experience will be an important commodity for Phil Brown’s men during their run-in.

Head To Head
This weekend’s game will be just the eighth encounter between the two clubs and Barrow have the edge having won five of the previous seven meetings.

The Bluebirds have enjoyed particular success on home soil against The Shrimpers having won on each of the three occasions that the Essex outfit have travelled north.

Referee
It will be Martin Coy’s first Barrow game of the campaign this weekend when he is the man in the middle for our League Two meeting with Southend United.

An experienced official, Coy has been part of the EFL’s bank of referees since 2017 and Saturday will be his 30th game of the 2020/21 season across all competitions.

His most recent outing came a week and a half ago when he watched Bolton Wanderers defeat Carlisle United 1-0 at The University of Bolton Stadium.

Betting
Barrow have been installed as 21/20 favourites for three points on Saturday, while Southend are rated a 5/2 shot for victory and the draw is priced up at odds of 9/4 with our friends at Sky Bet.

Live Streaming
Match Passes to watch Saturday's game live on iFollow Barrow are now available so that you can enjoy every second of the action as we host Southend United.

Live Commentary
We will also provide an audio commentary of Saturday’s game when we link up with BBC Radio Cumbria who will describe every kick from our clash with The Shrimpers.

Barrow lost in their final home game of the season as Southend United came from behind to win at The Progression Solicitors Stadium but were still relegated from the Football League.

Results elsewhere meant that The Shrimpers’ 2-1 win in Cumbria was not enough to save them as they produced a determined performance to complete a double over The Bluebirds.

Scott Quigley steered Rob Kelly’s men in front with a nice finish on 19 minutes but Southend were level ten minutes later through John White before Tyrell Egbri’s goal early in the second half proved the decisive moment.

It was a cagey start to the game as both sides struggled to settle into a rhythm in the early stages though Ricky Holmes did test Joel Dixon with a curling drive from the right corner of the box after a lovely turn from the Southend winger.

Luke James began to cause problems for the visitors when dropping deep to collect the ball and he managed to release Scott Quigley but the front man struck a left-footed shot too high to trouble keeper Mark Oxley.

At the other end, some determined defending from Tom Beadling ensured John White’s powerful shot from a corner was blocked away to safety as Phil Brown’s men pressed for an opener.

However, on 19 minutes Barrow stole in front. Another good piece of play from James saw him set Quigley away with an incisive pass and this time Quigley kept his cool to slot a clinical low finish past Oxley and make it 1-0.

The lead only lasted until the half hour mark though. Holmes sent a wicked free kick in to the Bluebirds area from the right and White arrived 12 yards from goal to smash a volley beyond Dixon and level things up.

Jamie Devitt skilfully slalomed between three Southend defenders to find some space on the edge of the box and slip a clever ball through to Quigley who rounded Oxley and fired home only for Barrow to be denied by the offside flag.

The Shrimpers began the second half on the front foot and came close to stealing in front for the first time when Tyler Cordner unloaded from long range, but his powerful shot picked up a deflection and flashed wide of the post.

However, they got their breakthrough on 52 minutes when Tyrell Egbri wriggled brilliantly through a couple of Barrow challenges to find enough space to shoot from 20 yards and his effort found a way past Joel Dixon to give United the lead.

Patrick Brough was introduced to the action and could have made an immediate impact when his drive was deflected just wide before Matt Platt got on the end of the resultant corner only to see his header well held by Oxley.

Ollie Banks then delivered a dangerous ball into the Southend box from the left which Platt battled for and was able to stab a shot on goal which was bravely blocked by Oxley who took a kick to the head for his efforts.

Greg Halford engineered a shooting opportunity for Southend on the right side of the box, but his low drive never really threatened as Dixon watched it into the side netting at his front post.

Some lovely football down the right opened Southend up, as Banks cleverly clipped a ball into the box for substitute Calvin Andrew who laid it back to the midfielder to shoot but his effort cleared the cross bar. 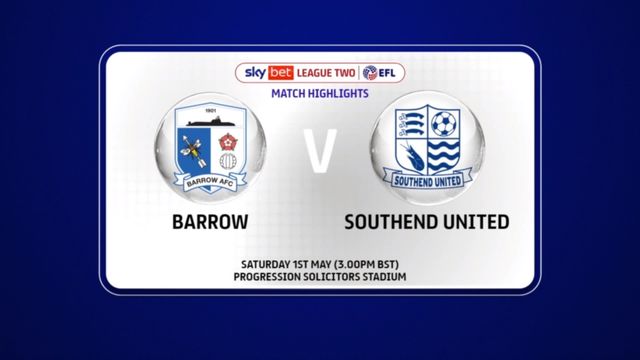 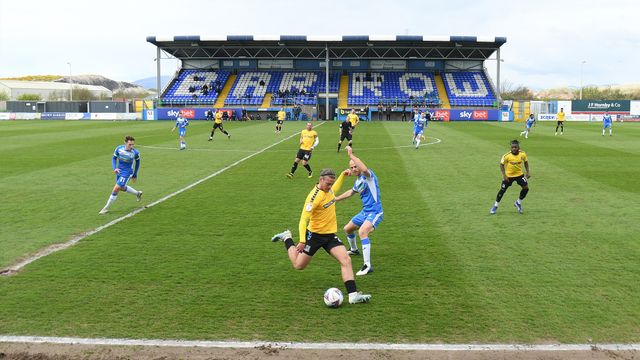