Take a look at everything you need to know ahead of this weekend's Sky Bet League Two trip to face Exeter City at St James' Park.

In Opposition
Exeter City gave themselves hope of snatching a play-off place on the final day by securing a dramatic injury-time win at Bolton Wanderers last weekend.

The Grecians’ 2-1 triumph means that they can still nudge into the top seven if they get a result against Barrow – though they will also need a favour or two in games elsewhere.

The Devon outfit turned to Matt Taylor as their new boss in the summer of 2018 following the departure of the long-serving Paul Tisdale.

Since then, they have been in the mix for promotion and finished fourth last season before losing to Northampton Town in a bruising Play-Off Final experience at Wembley.

One To Watch
Matt Jay has been in outstanding form for The Grecians this season and was crowned as League Two’s Player of the Month after a particularly eye-catching March.

The 25-year-old has helped himself to 19 goals in all competitions this term and he will be hoping there are more to come as City look to book their place in the play-offs.

Jay has come through the ranks at Exeter and debuted at the tender age of 17 and has clocked up over 100 senior appearances for the Club.

Head To Head
This will be Barrow’s first trip to Exeter City for almost 50 years when The Bluebirds were beaten 7-1 on the final day of the 1971/72 season on their way to demotion from the Football League.

The two clubs have met in competitive action 19 times up to this point and the record is fairly balanced, with Barrow having won six times and Exeter tasting victory on five occasions.

Barrow’s last win at St James’ Park came in February 1967 when Roy McCarthy and George Smith grabbed the goals in a 2-1 triumph in Devon.

Referee
Ben Toner will take charge of his second Barrow game of the season this weekend when he is on the whistle for our encounter with Exeter City.

He was previously in charge for our Cumbrian derby at Carlisle United back in September when he sent off home defender Aaron Hayden.

Toner has been on the EFL list since 2015 and has taken charge of 31 games across all competitions this season, the most recent being Burton Albion’s 1-1 draw with Gillingham last weekend.

Betting
Exeter City are rated 4/6 favourites for three points on Saturday, with Barrow given odds of 17/4 on winning in Devon, while a draw is priced up 5/2 with our friends at Sky Bet.

We’ll be linking up with BBC Cumbria’s expert duo of Adam Johnson and Mark Boyd for full live commentary to go alongside our live stream from St James’ Park.

Live Commentary
We will also provide an audio commentary of Saturday’s game as BBC Radio Cumbria team, Adam Johnson and Mark Boyd deliver coverage to fans all over the world via iFollow.

You can purchase an Audio Match Pass for £2.50 to access full live online commentary on Saturday.

Barrow ended their first season back in the Football League with a creditable point on the road at Exeter City as Tom Beadling’s goal earned them a 1-1 draw in Devon.

The Grecians needed to win to keep alive any hopes of reaching the play-offs and things looked good when Matt Jay steered them in front midway through the first half.

However, Rob Kelly’s side rallied after the break and hit back when Beadling’s powerful strike from a corner flew into the net and it eventually landed them a share of the spoils at St James’ Park.

There was a quiet opening to the game as Exeter looked to probe for an opening but Chris Taylor almost gave Barrow the lead on 11 minutes when his looping volley dropped just wide of the post.

A couple of minutes later, The Bluebirds could have scored their most bizarre goal of the campaign. Joel Dixon launched a long clearance downfield which bounced high at the edge of the Exeter box and almost deceived Jokull Andresson in the City goal who had to back off and tip it round the post.

The home side were enjoying most of the possession but struggling to break down a determined Barrow backline, Jake Taylor volleying over from just inside the area from their most dangerous attack on 21 minutes.

However, City found the opening with 25 minutes on the clock when Robbie Willmott did well down the left and crossed low towards the edge of the six-yard area where Matt Jay gleefully converted his 20th goal of the season.

Neal Eardley came close to levelling things as half time approached when City failed to fully clear a Bobby Thomas throw-in from the left but the defender’s drive flashed just the wrong side of the post.

Barrow finished the half strongly and had an opportunity right on the whistle when Tom Beadling met a right-wing corner with a glancing header which just fell wide of the far post.

The Bluebirds began the second half with a spring in their step though they were thankful to Dixon for making a tidy save from Taylor as the home skipper shot from the edge of the area.

Kelly’s men were level just before the hour mark when they applied some pressure with a couple of corners. City failed to fully clear the second one and it fell kindly into the path of Tom Beadling who rifled a clean finish through a crowded box and into the net for 1-1.

City tried to get back on the front foot to regain their lead but crosses into the box were too often easily dealt with by the Barrow defence, though Ryan Bowman’s flicked header needed saving by Dixon.

At the other end, the introduction of Dimitri Sea provided The Bluebirds with a different threat and the Frenchman drilled a deflected effort wide of the front post after good work down the left.

Brough then sprinted clear down the left on the counter attack for Barrow and attempted to square the ball into the middle for Luke James but a recovering City defender got in the way and diverted it just wide of the post.

There was a glorious chance for City to go back in front nine minutes from time when they got space down the right but Ben Seymour’s cross was somehow fired over the bar by the arriving Ryan Bowman.

Barrow could have gone in front when substitute Ollie Banks fired a low shot on goal which was well saved by Andresson down to his right before Sea’s show on the rebound was blocked.

Bowman had another chance for the hosts in injury time when he bundled his way through on the left but this time Dixon did well to block his effort at the near post and Nigel Atangana’s follow-up lacked power. 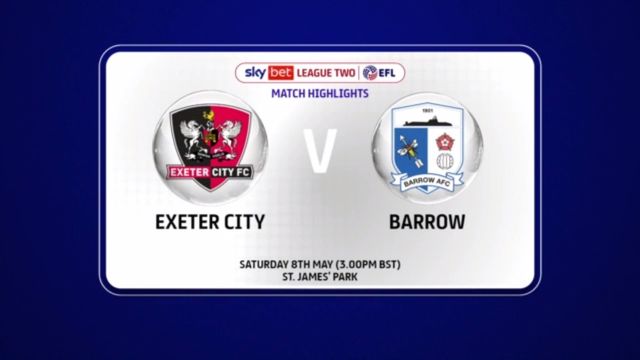 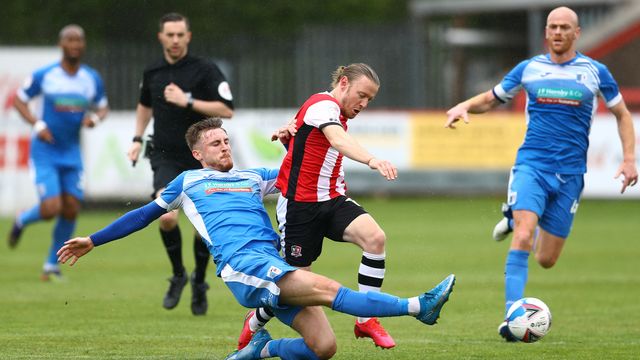