Take a look at everything you need to know ahead of tonight's game in our full and in-depth preview of the action.

In Opposition
After a fairly tricky start to their new League Two campaign, Oldham Athletic arrive at The Progression Solicitors this evening in a strong run of form.

Harry Kewell’s men have won three of their last five league outings, including an outstanding 2-1 win at Exeter City on Saturday to bring The Grecian’s 13-game unbeaten run to an end.

It’s fair to say that The Latics have been better on the road than they have on home soil – they’ve collected 10 of their 14 points so far this season on their travels.

That leaves them sitting one point and one place above Barrow in the League Two table ahead of this evening’s contest so both sides have plenty to play for.

One To Watch
Danny Rowe rifled home his fifth goal of the season in all competitions on Saturday when his astonishing free-kick helped Oldham pick up their brilliant win at Exeter City.

The former AFC Fylde star made the move to Boundary Park in January after smashing an incredible 192 goals in 293 appearances for The Coasters.

Rowe spent a short time on loan with Barrow in 2013 and he will need to be well-marshalled this evening to ensure he doesn’t enjoy a profitable return to Cumbria.

Head To Head
Barrow and Oldham Athletic have met 50 times in competitive action in the past, though this evening’s fixture will be the first such meeting since an FA Cup tie in 2001.

The Bluebirds have the edge historically having enjoyed 24 victories in comparison to The Latics’ 21 triumphs, while just five encounters have ended in draws over the years.

Referee
Declan Bourne is on the whistle for tonight’s game against Oldham Athletic as he oversees his second Barrow fixture of the new campaign.

The official, promoted to the EFL alongside The Bluebirds for 2020/21, was also the referee when we made our trip to fellow League Two newcomers Harrogate Town last month.

Bourne has been doing the business in both League One and Two so far this term, though his most recent outing was for Shrewsbury Town’s 4-3 Papa John’s Trophy win over Crewe Alexandra two weeks ago.

Betting
Barrow have been installed as 11/10 favourites for three points tonight, with visitors Oldham rated an 11/5 shot for victory and the draw priced up at 13/5 with our friends at Sky Bet.

Live Streaming
Match Passes to watch tonight’s game live on iFollow Barrow are now available so you can keep a close eye on the action as David Dunn’s men go head-to-head with The Latics.

Click here now to buy your Match Pass for this evening’s game.

Live Commentary
We will also provide an audio commentary of tonight’s game when we link up with BBC Radio Cumbria’s Adam Johnson and John Goodwin, who will describe all the action as it unfolds.

Barrow fell to their first home league defeat of the season as Oldham Athletic came from behind to run out 4-3 winners at The Progression Solicitors Stadium.

The Bluebirds were flying high when Scott Quigley fired in his first league goal of the new campaign but Ben Garrity fired the visitors level and Danny Rowe nodded them in front.

David Dunn’s men thought they had secured a share of the spoils when Matt Platt scored from a corner on 79 minutes. but Oldham won a penalty just a minute later which Rowe converted to restore Athletic's lead.

The visitors then ran home a fourth in stoppage time through Conor McAleny before Dior Angus scored to make it 4-3 with the final touch of the game.

It was a scrappy start with neither side really taking the game by the scruff of its neck in the early stages, but it was Barrow who go on top as time wore on.

Quigley earned the first opportunity of the night when he showed great strength to barge Latics skipper Carl Piergianni off the ball and race through on goal but his pass across the box was cleared by a recovering defender.

Luke James saw a shot blocked after he found space on the edge of the area and Connor Brown’s testing cross from the left also caused problems as The Bluebirds began to press.

The breakthrough arrived on 16 minutes when Quigley brilliantly claimed a hopeful ball forward on his chest before driving towards goal and then placing a lovely low shot beyond the despairing dive of keeper Ian Lawlor and in to the bottom right-hand corner of the net.

The Bluebirds front man could even have doubled his tally less than a minute later when he was given enough room thirty yards out so let fly with a low drive which Lawlor did well to claim as it skipped up off the pitch in front of him.

Joel Dixon produced an astonishing save to deny Oldham a leveller on 32 minutes when he somehow got down to get a fingertrip on Bobby Grant’s powerful low drive, which struck both posts before staying out.

However, Oldham were well on top during the closing stages of the first half and got back on level terms six minutes before the break when Grant’s cross from the left was only half-cleared and Bemn Garrity arrived to smash a shot beyond Dixon to make it 1-1.

There was worse to come on the stroke of half-time when Grant’s right-wing corner was met by Danny Rowe and his glancing header dropped across goal and in to the far corner of the net to give The Latics a lead at the interval.

Barrow came out with a bit more fire in their bellies at the start of the second half and could have drawn level when Matt Platt met a corner with a header which was flicked on goal by James but held by Lawlor.

Things turned a little bad-tempered around the hour-mark as a flurry of yellow cards for strong challenges culminated in Brad Barry being forced off through injury.

The Bluebirds then began to stitch together some of their best football of the night, moving the ball across the pitch and probing for an opening in the visitors’ defence.

Josh Kay, on in place of the Barry, was fed the ball by fellow substitute Chris Taylor on the left of the area and then fizzed a delicious cross along the six-yard line but nobody in blue could deliver a decisive touch.

Quigley then did really well down the left to dig out a cross in to the front post for Dior Angus but the substitute’s excellent glancing header was pawed away by Lawlor.

The equaliser arrived 11 minutes from time when a deep corner from the left was missed by everyone apart from Matt Platt and the big defender did brilliantly to divert it beyond Lawlor to level the game up at 2-2.

No sooner had the celebrations died down than Barrow suffered another setback as Yoan Zouma was adjudged to have fouled Bahamboula in the area and Rowe slotted home his second of the night from the penalty spot to restore the visitors’ lead.

The Latics then wrapped up the points on the break in injury-time when Rowe got away down the right and rolled the ball across for Conor McAleny who produced a neat finish to make it 4-2.

Angus bundled in from close-range right at the death to reduce the arrears but it wasn't enough to prevent defeat as Oldham became the first side to take three points at Barrow this term. 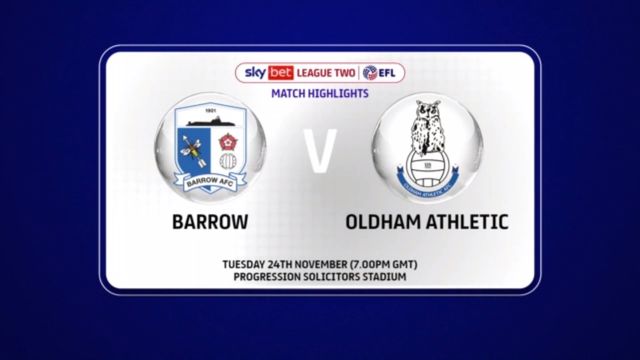 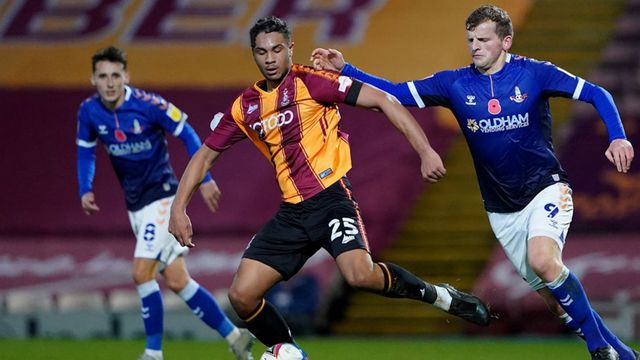