Take a look at everything you need to know ahead of kick-off with our full and in-depth preview.

In Opposition
Cambridge United have enjoyed a wonderful start to the new campaign and know they could go back to the top of League Two with victory over Barrow on Saturday.

The U’s have won seven of their 11 league outings so far this term and remain unbeaten on home soil ahead of The Bluebirds’ visit to The Abbey Stadium this weekend.

After finishing in the bottom half of the division last time around, few would have tipped Cambridge to be among the pacesetters but they have been in fantastic form in the opening months.

Mark Bonner impressed during his spell as caretaker boss at the start of the year following Colin Calderwood’s departure and that prompted the club to offer him the job permanently in March.

Bonner’s men are the top scorers in the country at present after finding the net 24 times so far in league action so Barrow will have to find a way of nullifying that threat this weekend.

One To Watch
One of the main factors behind Cambridge United’s brilliant start to the new campaign has been the form of free-scoring forward, Paul Mullin.

Mullin has hit the net 13 times in all competition and 12 of those strikes have come in League Two to put the prolific front man out on his own at the top of the division’s scoring chart.

Having come through the ranks at Huddersfield Town, Mullin enjoyed a superb spell at Morecambe which saw him earn a move to Swindon Town in 2017 before he signed for Tranmere Rovers a year later.

He signed for Cambridge on loan in January before making that move permanent in the summer and he’s hit the ground running in 2020/21 so The Bluebirds will need to keep a close eye on him this weekend.

Head To Head
Saturday’s game will be the 15th competitive meeting between the two clubs and it’s fair to say that Cambridge have enjoyed the better of it historically – The U’s have won 10 of the previous 14 encounters.

Cambridge have done the double over Barrow in each of the last three seasons they shared a division between 2010/11 through to 2012/13 in the National League.

Barrow’s last win in the fixture came at Cambridge in 2009 when goals from Carlos Logan and Jason Walker ensured a 2-0 triumph at The Abbey Stadium.

Referee
Josh Smith will be the man in the middle for this weekend’s encounter between Cambridge United and Barrow at The Abbey Stadium.

The official is in to his third season as an EFL referee and you have to go back to November 2018 for the last time he oversaw a Barrow game when he watched us beaten 1-0 at Ebbsfleet United.

So far during 2020/21, Smith has taken charge of nine games – his most recent appointment came in the Championship when he saw Wycombe Wanderers win 2-1 at Birmingham City earlier this month.

Betting
The bookies have installed Cambridge as 11/10 favourites for three points this weekend, while you can get odds of 23/10 on Barrow picking up a win and the draw is also priced up at 23/10.

Fans in the UK can buy a Match Pass to watch the action now priced at £10, while oversea supporters pay £7.

Live Commentary
We will also provide an audio commentary of this weekend’s game when we link up with BBC Radio Cumbria who will describe all the action as it unfolds.

The Bluebirds looked set for their second consecutive 1-0 defeat on the road after Joe Ironside’s early second half goal had put the hosts in the driving seat.

However, an enormous amount of pressure told in the 96th minute of stoppage time when Platt got up highest in the area to bullet an unstoppable header in to the bottom corner to prompt wild celebrations which included David Dunn making an ecstatic dart up the touchline.

Barrow began on the front foot and were dictating play in the opening stages, moving the ball around quickly and trying to get at their high-flying opponents.

A breakthrough almost arrived on 16 minutes when Harrison Biggins lifted a 25-yard free-kick over the wall but it crashed back off the post and The U’s survived.

At the other end a deep cross from the right found Joe Ironside on the stretch but the front man could only a direct his header in to the side netting.

The Bluebirds created their own problems when a risky ball out of defence was intercepted by Cambridge’s Idris El Mizouni, who drove forward dangerously but saw his low drive held by Joel Dixon.

Luke James was causing issues for the home defence and a lovely turn on the halfway line set him away in to space and he made his way towards the edge of the box before his shot was deflected wide.

Barrow came closest of all to opening the scoring three minutes before the break when more good work from James freed Josh Kay down the right and his menacing low cross was deflected up and off his own cross bar by a defender before bounding out to safety.

Luke Hannant tested Dixon with a powerful drive moments later before the final chance of the half went Barrow’s way when Biggins got in behind down the left and flashed a ball across goal which just evaded the arriving Dior Angus.

Barrow began the second half in similarly confident fashion and could have gone in front within two minutes when Kay’s cross found the arriving Biggins but his header was well blocked by a defender.

However, it was Cambridge who stole in front on 56 minutes when top scorer Paul Mullin closed down Dixon, forcing the keeper in to a hurried clearance which only reached Ironside 25 yards out and he showed great composure to fire it in to the unguarded net.

The Bluebirds reacted positively and could have been on level terms almost immediately but Kay’s clipped effort from the left corner of the area but just too high and then Biggins also fired over after cutting inside from the right.

Dixon came to the rescue for Barrow just afterwards when Mullin escaped through on goal but the Bluebirds keeper darted from his line to smother the Cambridge front man’s effort.

Scott Quigley made a difference from the bench and almost snatched a leveller three minutes from time when he did well to find an angle on the edge of the box but his powerful left foot shot flashed just too high.

The drama arrived right at the death when Sam Hird saw a goalbound deflected agonisingly over the bar and, from the resultant corner, the ball was hung in to the area for Platt to deliver a wonderful header right in to the bottom corner to rescue a point. 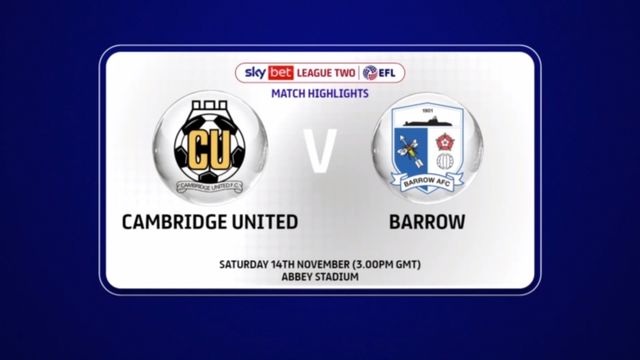 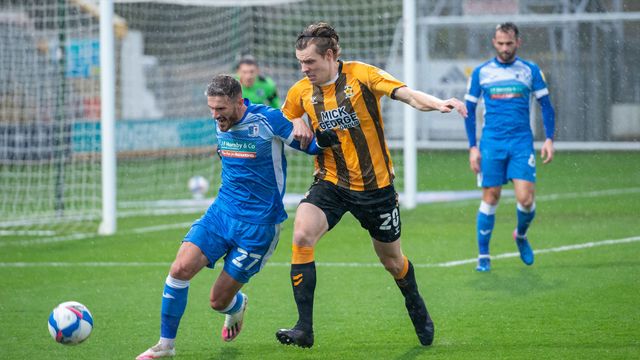