We turn the spotlight on Tuesday night's action with a full and in-depth preview of our trip to Blundell Park (7pm kick-off).

In Opposition
Grimsby Town lie 17th in the League Two table, two places and two points behind Barrow ahead of this evening’s meeting at Blundell Park.

The Mariners have had an inconsistent start to the new campaign and their two victories so far have both come on the road – back-to-back successes at Cheltenham Town and Leyton Orient last month.

However, Ian Holloway’s men are without a win since then, though they did take a creditable point away at Stevenage on Saturday.

Their season has also been disrupted by COVID-19 and Town were forced to shut down for 14 days when their squad went in to isolation at the end of September, causing the postponement of three games.

One To Watch
Danny Preston has been an ever-present in the Grimsby Town defence since making a loan move from Nottingham Forest at the start of the season.

The promising 20-year-old has been a regular for Forest’s Under-23 side since he was 16 and gained some senior experience last term with a spell on loan at Alfreton.

A left-back by trade, Preston has impressed during his time at Blundell Park to date and will be hoping to continue that form when Barrow arrive in town tonight.

Head To Head
Tonight’s game will be the 39th competitive meeting between the two clubs and it’s Grimsby who have the best record by far – they’ve won 20 times in comparison to Barrow’s eight victories.

The Mariners completed a league double over Barrow the last time the two sides shared a division in 2015/16, winning 4-1 at Blundell Park in the August before running out 3-1 winners at Holker Street thee months later.

Barrow’s last in in the fixture came March 1968 when they enjoyed a 2-0 win over Grimsby when they visited Cumbria during the 1967/68 campaign.

The official is now in to his third season on the EFL’s list of referees and has so far taken on eight appointments during the 2020/21 campaign.

His most recent outing came at The One Call Stadium on Saturday when he saw Mansfield Town and Walsall play out a 1-1 draw in League Two.

Young last refereed The Bluebirds back in 2015/16 when he saw us draw 1-1 at Braintree Town and then 2-2 at Lincoln City in a game which saw Barrow’s Nick Anderson sent off.

Betting
Barrow have been installed as 7/5 favourite to claim the three points tonight, with hosts Grimsby Town a 17/10 shot and the draw priced up 12/5 with our friends at Sky Bet.

Barrow’s unbeaten run was ended at Grimsby Town on Tuesday night as Montel Gibson’s second half goal was enough to secure the points in a hard-fought League Two encounter.

David Dunn’s men gave as good as they got during a high-tempo affair at Blundell Park and could probably argue they were worth at least a share of the points but a clinical second half finish from Montel handed The Mariners their first home win of the season.

An unchanged Barrow got their passing game going within three minutes to carve out the first chance as Jason Taylor fed the ball forward for Dior Angus who instantly turned and let fly from 20 yards only to see his shot tipped over the bar by Town keeper James McKeown.

Grimsby attempted to respond with some good football of their own down the left which freed the recalled Montel Gibson in to space but he pulled a tame shot wide of the front post after cutting inside dangerously.

There was a great opportunity for The Mariners to open the scoring on eight minutes when a flighted ball in from the right found Max Wright unattended, but he could only head an effort wastefully over the bar.

Town felt their way in to the game more as it went on but struggled to get in behind a resolute Bluebirds backline, resorting to ambitious long-range efforts from Wright and Luke Waterfall which both found the stand rather than the net.

At the other end, Barrow were still looking sprightly on the counter-attack at times, Biggins leading one such raid to feed a cross in from the left towards Luke James but the forward couldn’t get enough power on his header to trouble McKeown.

It was a scrappy start to the second period with both sides giving the ball away at times, prompting David Dunn to make a double change in an attempt to give his side the edge, Chris Taylor and Jayden Reid introduced to the action.

James did ever so well to pull a through ball down and turn to shoot on goal but the Town defenders recovered to block his effort and clear the danger.

On the hour, it was Grimsby who broke the deadlock. A neat move down the right saw Wright slip a low ball across goal and Gibson was there to produce a clever dinked finish past Joel Dixon for 1-0.

Chris Taylor had a glimpse of goal when he was the fed the ball 25 yards out and he quickly turned and drove a low effort which flew just wide of the target.

James produced a lovely bit of skill to outwit his defender and turn in to space on the edge of the area but the power was taken off his shot by a block from a defender and it was easy in the end for McKeown.

Barrow thought they had levelled it ten minutes from time when Matt Platt strode out of defence to thread a lovely ball through for Reid, who charged in to the box and drilled a low shot across McKeown which crashed back off the foot of the post and somehow stayed out.

Reid came close again as time ticked away and, after being fed by James, he struck a shot on goal which struck a defender and squirmed just wide of the post before hitting another effort just off target from the resultant corner.

Barrow kept on pressing through five minutes of injury time but could not find a route to goal and it was Grimsby who were left to celebrate the three points. 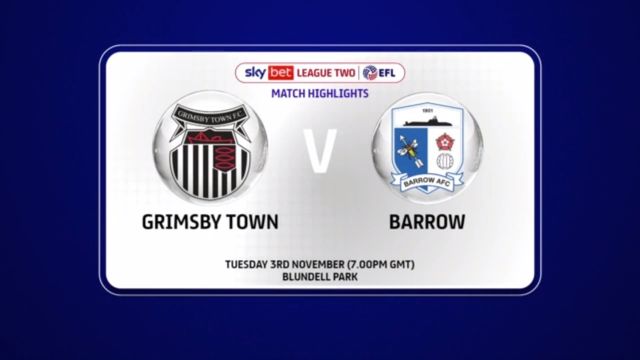 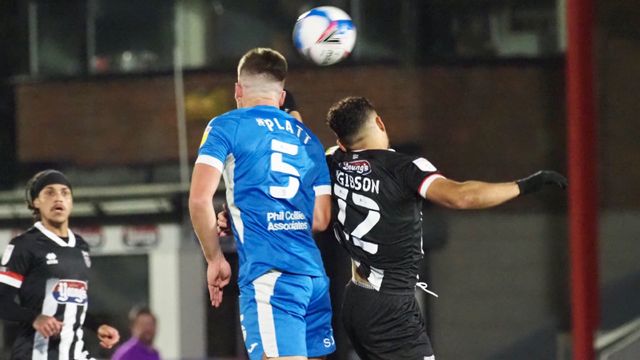