We look ahead to Monday evening's EFL Trophy action with our full and in-depth preview.

In Opposition
Leeds United Under-21s will look to recover from their 7-0 thrashing at Accrington Stanley in their last EFL Trophy outing when they come to Barrow for their second Group G fixture on Monday.

Barrow boss David Dunn accepted a request from the visitors to move the game forward 24 hours which will allow Leeds United to bring a stronger squad to Cumbria.

United’s youngsters have been in pretty good form in Premier League 2 in recent weeks, despatching Sunderland and Middlesbrough in recent weeks, though they were thumped 4-0 at Stoke City three weeks ago.

Managed by former Leeds United and England Under-20 defender Mark Jackson, the Elland Road outfit are likely to offer a competitive challenge for The Bluebirds on Monday with three points up for grabs.

One To Watch
Sam Greenwood swapped Arsenal for Leeds United during the summer and the promising young front man has certainly hit the ground running at Elland Road.

The Sunderland-born hit man will have taken extra satisfaction from his hat-trick in United’s 3-1 win over The Black Cats last week but also scored the only goal as they defeated Middlesbrough on Friday.

Confidence will be high for Greenwood ahead of the trip to Barrow and, if the teenager is on the pitch, then he will have to be carefully marshalled on Monday night.

Team News
David Dunn looks set to shuffle his pack for Monday evening’s game and give some minutes to those who have been on the fringes of the First Team action so far this season.

James Jones seems likely to be unavailable after being stretchered off during the second half of Saturday’s 1-0 defeat at Carlisle United.

Referee
Marc Edwards will be the man in the middle for Monday night’s EFL Trophy tussle with Leeds United Under-21s at The Progression Solicitors Stadium.

It will be the first time Edwards has overseen a Barrow fixture since January 2019 when he was in charge for our goalless draw at AFC Fylde on New Year’s Day.

Edwards was also on the whistle when The Bluebirds lost 4-2 at Harrogate Town in October 2018 and for our 1-0 home win over Dagenham & Redbridge the previous month.

Competition Rules
If the game is all-square at 90 minutes then both sides will be awarded a point, but an extra bonus point will then be competed for in a penalty shootout.

Live Streaming
Match Passes to watch Monday’s game live on iFollow Barrow are now available as normal – Season Ticket holders are reminded they do not get free access to this game as it is an EFL Trophy fixture.

Click here now to buy your Match Pass for Monday.

Live Commentary
We will also provide an audio commentary of Monday’s game when we link up with BBC Radio Cumbria who will describe all the action as it unfolds.

Barrow came from two goals down to draw with Leeds United Under-21s in their latest EFL Trophy outing at The Progression Solicitors Stadium on Monday night.

Things looked bleak for David Dunn’s much-changed side as they fell behind to two neat first half finishes from visiting forward Max Dean, but Dior Angus and Jason Taylor grabbed the goals in the second half as The Bluebirds brought it back level.

Barrow showed ten changes to the starting eleven from Saturday’s defeat at Carlisle United, while new boys Chris Taylor and Yoan Zouma were both handed their Barrow debuts.

Both sides showed their desire to pass the ball around during the opening stages and there was some good football on display on a slick pitch.

However, it was an error which brought about the first goal when a sloppy back pass was seized upon by Leeds forward Max Dean, who charged down Josh Lillis’ attempted clearance before getting to the loose ball first, composing himself and firing a clinical finish high in to the net.

It could have been 2-0 five minutes later when the visitors produced a blisteringly quick counter-attack but Stuart McKinstry saw his crisp low drive deflected just wide of the right-hand post.

Josh Kay almost pulled Barrow level with a stunning solo goal after dribbling from inside his own half to the edge of the Leeds box but his low shot was well turned round the post by Leeds keeper Elia Caprile.

The Bluebirds wide man was denied again just after the half hour when he found room to send another low shot on goal but again Caprile was equal to it and turned the ball round the post.

It was 2-0 to the visitors seven minutes before half-time when Barrow once again caused their own problems, losing possession on the edge of their own box and Dean rolled home his second of the night after the ball was unselfishly squared in to his path by a team mate.

Barrow put some pressure on at the start of the second half as Luke James saw his shot on the turn blocked before half time substitute Brad Barry flashed an effort across goal and wide.

Callum Gribbin was next to try his luck when he found space twenty yards from goal and his low drive looked to be sneaking in before Caprile got down smartly to gather.

Kay was continuing to look dangerous for Barrow and his driving run put Leeds on the back foot again as the hour approached but James’ shot was charged down by a defender and cleared.

Josh Lillis had to be alert to make a brilliant reaction save and prevent Dean completing his hat-trick at the end of another slick counter-attack from Leeds.

It proved a key moment because Barrow broke immediately to reduce the arrears when substitute Dior Angus beat the keeper to a through ball and calmly slotted it home in to the empty net.

Angus almost managed to carve out a leveller on 76 minutes when he spun skilfully on the edge of the area but his curling left foot shot was well held by the keeper.

It was all-square on 80 minutes and it was Jason Taylor who nodded Barrow level, timing his run perfectly to get on the end of James’ flighted ball in to the middle and finding the bottom corner.

So the game went to a shootout and Josh Lillis made three excellent saves to give Chris Taylor the chance to ram home the winning spot-kick and secure The Bluebirds a bonus point. 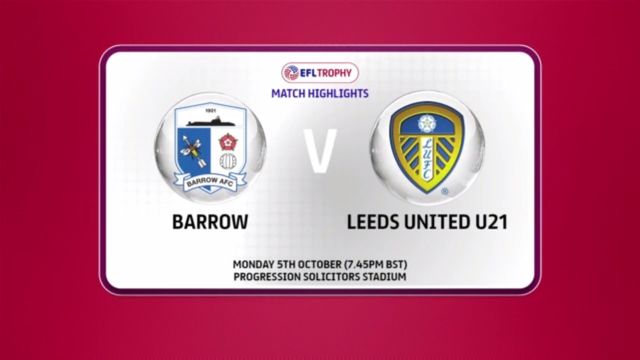 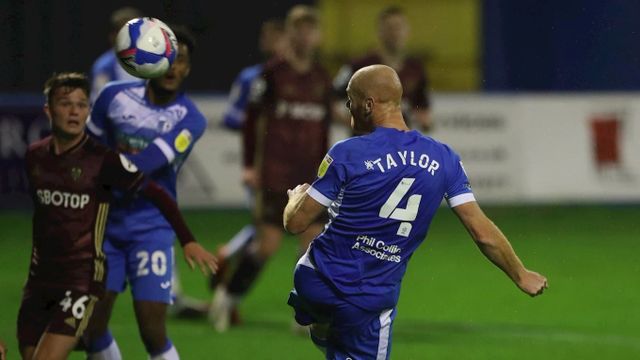