We take a look at everything you need to know ahead of this weekend's big game at Brunton Park.

In Opposition
There is big excitement this weekend as the first Cumbrian derby between Carlisle United and Barrow in almost 60 years takes place at Brunton Park.

The fixtures against Carlisle were one of the first things Bluebirds fans looked out for when their historic League Two schedule was revealed back in August.

Now the first of the encounters have come around early in the season and the Cumbrian bragging rights will be up for grabs for the first time since 1964.

Carlisle have had an inconsistent start to the new campaign; their 2-0 win over Southend United las time out on home soil is their only victory and they’ve lost their other four games in all competitions.

Head To Head
Saturday’s game will be the first time that Barrow and Carlisle United have met in competitive action since April 1964.

The 1963/64 season is the last time the two clubs shared a division and it was Carlisle who edged it that year, enjoying a 4-1 triumph on home soil having drawn 2-2 in Barrow earlier in the campaign.

The overall record in the fixture is quite tight though; Carlisle have won slightly more times (23) but Barrow (21) can close the gap on Saturday if they come away with three points.

One To Watch
Gime Toure will be hoping to prove his fitness and take his place in the Carlisle line-up this weekend and, if he does, the Barrow defenders will have to be on their toes.

The French front man is blessed with a lot of pace and plenty of trickery, which has already been on display since he made a switch to Brunton Park from Hartlepool United during the summer.

Toure scored some spectacular goals during the first half of last term for Pools and he is capable of conjuring something from nothing so he will need patrolling carefully if he makes it on to the pitch.

Team News
David Dunn has a few injury concerns going in to the game but has been boosted by the arrival of defender Yoan Zouma who comes in to contention for a debut.

Carlisle boss Chris Beech sent Omari Patrick to see a specialist after he missed last weekend’s game at Scunthorpe United with a leg injury, while Gime Toure hopes to shake off a dead leg in time to face The Bluebirds.

Referee
Ben Toner will referee his first Barrow league game this weekend when he’s on the whistle for our derby clash with Carlisle United at Brunton Park.

He has presided over The Bluebirds a couple of times in FA Cup qualifiers in the past, seeing us draw 0-0 with Telford and losing 3-0 to Newport County.

The experienced official is now moving in to his sixth season on the EFL’s list of referees and has already been busy this term, taking charge of five matches so far.

Betting
Carlisle have been installed as 6/5 favourites for three points this weekend, while Barrow are rated a 21/10 shot for victory and you can back the game ending in a draw at odds of 23/10.

Barrow were narrowly beaten during their first competitive visit to Carlisle United since 1964 as Jon Mellish’s first half header settled the Cumbrian derby at Brunton Park.

Mellish was afforded too much space to nod home inside the area and it was a setback from which The Bluebirds couldn’t recover despite a dominant second half performance played out against ten men for the most part after Aaron Hayden’s straight red card.

David Dunn had opted to make one change to his starting eleven for the game; former Carlisle man Patrick Brough was given the nod to make his first start of the season following injury.

Carlisle asked a few questions in the early stages but Barrow quickly settled and began to knock the ball around with authority, Dior Angus and Scott Quigley looking a handful for the home side.

The first real moment of danger was at the other end though when Carlisle’s Ethan Walker did well down the left to find space to whip a cross in to the box but nobody could get on the end of it and the ball flashed across Joel Dixon’s goal and wide of the far post.

Jon Mellish, minutes after picking up the game’s first yellow card for a lunging challenge, had the opening shot on goal for the home side when he was teed up on the edge of the box but his left-foot drive was too high to test Dixon.

Dixon certainly was tested with Carlisle’s next attack on 20 minutes as the hosts looked to warm to their task; this time Josh Kayode was cleverly slipped through on goal and looked odds-on to score but Barrow keeper Dixon got down superbly to his left to palm his shot around the post.

The first crucial moment arrived on 24 minutes when Gime Toure delightfully found a way in to space on the right of the area and his delivery was inch-perfect for Mellish who gleefully headed home his first goal for Carlisle.

Barrow’s best moment came after good work down the left and Patrick Brough’s dangerous ball found its way right across goal to the arriving Brad Barry, but his low drive was well parried away by Paul Farman in the Carlisle goal.

More brilliance from Toure, this time down the left, created a golden opportunity for Carlisle to double their lead but his cross was headed narrowly wide by Kayode, who should have done better.

Some lovely one-touch football from The Bluebirds opened up the Carlisle defence and provided Angus with a sight of goal just before the break but his shot on the stretch lacked the power to trouble Farman.

Barrow came out with a greater intent at the start of the second period and could have levelled when a lovely turn by Quigley set them on a counter-attack led by Hardcastle, but Brown’s low delivery missed out everyone and flashed across goal and wide.

There was a flashpoint just before the hour-mark when home defender Aaron Hayden tussled with James Jones at the far post as Barrow defended a corner. Both players ended up in a heap and referee Ben Toner produced a straight red card for the Carlisle man for an alleged kick out at his opponent; Jones was stretched from the field of play following the incident.

The game opened up after that and Barrow almost made the most of it on 74 minutes when a lovely flick from Hardcastle freed Biggins towards the edge of the area. He cleverly slid Quigley through on goal but keeper Farman charged out to block his shot and then recovered his position quickly to gather Barry’s powerful follow-up effort.

Barry was being pushed further up the right flank and was causing problems for Carlisle; his fizzed cross was excellently tipped clear by Farman but Kay scampered after the loose ball and whipped it back in to the box but Barry headed wide.

Quigley had reasonable shouts for a penalty turned down when he appeared to get a hand in the back and went to ground – the referee looked as though he was prepared to blow his whistle but then waved play on.

Mike Jones tried to reproduce his heroics from last week with a long-range drive which needed tipping round the post, before Hardcastle went down in the box from the resultant corner but received only a yellow card for diving from the referee.

There was an almighty scramble inside the Carlisle six-yard box deep in injury time but Angus couldn’t force it home and the ball was somehow smuggled away from danger. 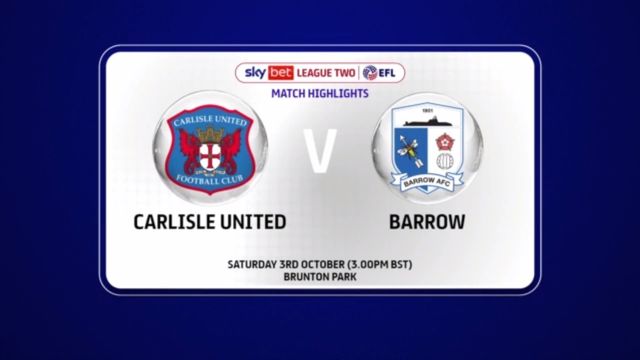 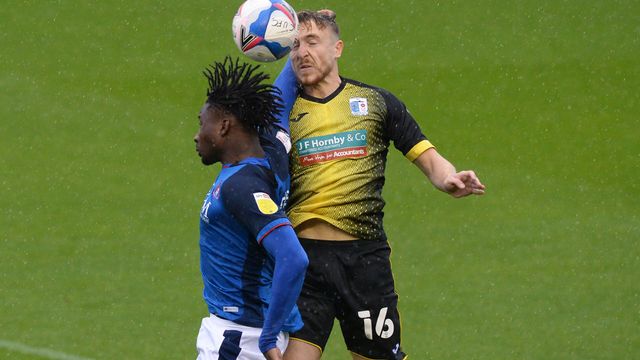