Take a look at everything you need to know ahead of Saturday's League Two fixture at Harrogate Town.

In Opposition
The National League’s two promoted clubs will go head-to-head in League Two for the first time this weekend when Barrow make the trip to Harrogate Town.

Simon Weaver’s side have made a solid start to the new campaign and were further boosted by a fantastic 1-0 win at Bradford City on Monday night.

The victory took them to ninth place and the brink of the play-off spots in the formative League Two table and they will be hoping to back that up on home soil on Saturday.

Town were forced to play their home games at Doncaster Rovers’ Keepmoat Stadium while a grass pitch was laid at their own stadium and this weekend will be the first time they have hosted a game there since the renovations.

Head To Head
Saturday’s game will be the 23rd competitive meeting between the two clubs and Harrogate have enjoyed the better of it over the years, winning 10 times in comparison to Barrow’s five triumphs.

Indeed, The Bluebirds make the trip this weekend still searching for their first ever win in Harrogate, having made 12 unsuccessful attempts in the past.

Barrow’s last win over Town was a good one though – it came in the form of a 6-2 thrashing dished out when Harrogate visited Cumbria in the FA Trophy in December 2016.

One To Watch
Jack Muldoon has become a big crowd favourite at Harrogate Town since making the switch to North Yorkshire from AFC Fylde in the summer of 2018.

The talented front man hit the net 14 times last season for Town and has taken that good form in to the current campaign, scoring three goals already.

The former Lincoln City man will need marshalling well this weekend if Barrow want to come away from the game with reward for their efforts.

Team News
David Dunn will assess the fitness of Scott Quigley after the front man was forced to miss last weekend’s game against Leyton Orient after picking up a knock in training.

Referee
Declan Bourne will take charge of this weekend’s meeting between Harrogate Town and Barrow at The EnviroVent Stadium.

The official stepped up in to the EFL at the start of the season and has taken charge of three games so far during 2020/21, his most recent was Walsall’s 1-1 draw with Colchester United last weekend.

Bourne has refereed four Bluebirds fixtures previously, most recently when he visited The Progression Solicitors Stadium in February to see our 2-1 win over Dagenham & Redbridge.

Betting
Harrogate Town have been installed as even money favourites for a victory this weekend, while you can get a price of 5/2 on Barrow and the draw is rated a 12/5 shot.

Barrow fell to defeat at Harrogate Town as the North Yorkshire outfit celebrated three points on their return to their home stadium thanks to Jack Muldoon’s first half goal.

The Bluebirds were dealt a blow before kick-off when it was confirmed that David Dunn had tested positive for COVID-19 and, with Assistant Manager Rob Kelly also isolating, the reins were handed temporarily to Sam Hird and Craig Rutherford.

Kgose Ntlhe and Matty Platt returned to the line-up following injury to boost Barrow though and they replaced Mike Jones and Dior Angus in the starting eleven.

Barrow were first to show their teeth in an attacking sense as Patrick Brough found space to stride out of defence and let fly with a powerful shot which deflected wide, before Yoan Zouma volleyed over from a corner.

However, The Bluebirds were dealt an early blow when a strong challenge on Lewis Hardcastle resulted in the skipper being helped from the field and Jason Taylor came on in his place.

Things got worse on 22 minutes when Town centre-back Will Smith lifted a long ball over the top and Jack Muldoon raced clear of the Barrow defence and rifled a first time shot beyond Joel Dixon to give the home side the lead.

It could have been 2-0 shortly afterwards when Smith got free in the box to meet a free-kick in from the right but the defender glanced his header wastefully wide.

The hosts were in control at that stage without really creating anything too much more in front of goal, though they did look menacing at times with deliveries in to the Bluebirds box.

Barrow finished the first half the stronger though and could have been level when Josh Kay brilliantly danced his way past a defender in the box before hitting a low shot towards the far bottom corner which Town keeper James Belshaw did superbly to parry away.

Kay then turned provider right on the half time whistle when he teed up Chris Taylor for the shot but his twenty-yard effort flew just too high.

Town started the second half on the front foot and their lead could have been doubled but for a smart save from Dixon who got down well to his right to turn away Lloyd Kerry’s low drive.

Another injury blow made things more difficult for The Bluebirds on the hour as Tom Beadling hobbled off before more good goalkeeping from Dixon kept Harrogate at bay from a free-kick.

Barrow gambled as time wore on and Dior Angus came on to replace Zouma but it was Town who continued to look the more likely scorers and only another fine save from Dixon denied Muldoon following good work down the left from substitute Brendan Kiernan.

Muldoon’s runs were causing a huge problem and he lashed another effort wide before testing Dixon with a low show after catching Barrow out on the counter-attack.

There was almost drama right at the end of five minutes of stoppage time when the ball fell loose for Angus at the back post but he could only force an effort in to the side netting and Harrogate held on for three points. 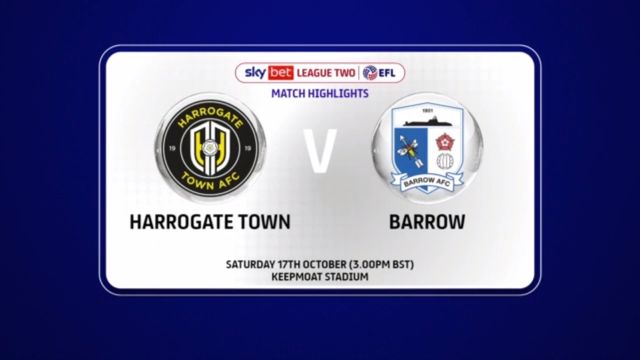 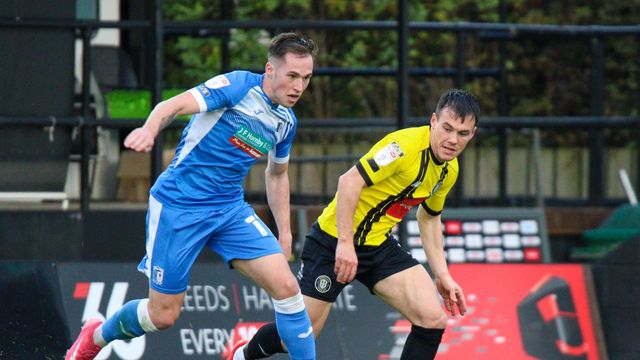