We take a look ahead to our trip to The One Call Stadium in our full and in-depth preview.

In Opposition
After a disappointing season in which they finished well inside the bottom half of League Two, Mansfield Town boss Graham Coughlan has overhauled his squad during the summer.

The Stags have the ambition to challenge for promotion to League One but they have had a frustrating start to the new campaign and, like Barrow, are still waiting for their first league win.

Coughlan remains upbeat about their performances to date and successive away draw at Morecambe and Cheltenham Town have provided a platform on which he hopes they can build.

Town have an identical record to Barrow coming in to this evening’s game, having drawn five and lost three, so it certainly makes for an intriguing battle at The One Call Stadium.

One To Watch
Former Barrow front man Andy Cook is now on the books at Mansfield Town and has two goals to his name so far during the 2020/21 campaign.

Now 30, Cook spent a couple of loan spells at Holker Street before joining permanently in 2011 and then returned to the Club in 2014 to enjoy a prolific spell during which he took his overall Bluebirds record to 72 goals in 176 games.

Since then he’s played for Walsall and Tranmere, but The Stags paid an undisclosed fee for him last summer and will now be looking to him to fire the goals that help lift them up the League Two table.

Head To Head
This evening’s game will be the 57th competitive encounter between the two sides and it’s Town who have the edge historically having won 24 times in comparison to Barrow’s 21 victories.

Of course, there hasn’t been much for Bluebirds to sing about in recent meetings with The Stags – they won 4-0 at Barrow in the last game in 2013, following up their 8-1 win on home turf from earlier in the season and a 7-0 victory in the previous campaign.

Barrow’s last triumph in the fixture came in September 2009 when a double from Jason Walker and a further strike from Malvin Kamara secured a 3-1 National League win at Holker Street.

Referee
Keith Stroud will be the man in the middle for Barrow’s visit to Mansfield Town tonight, taking on his seventh game of the 2020/21 campaign so far.

The experienced official does most of his work in the Championship these days but he will be on the whistle when we take on The Stags tonight.

Stroud was highly entertained during his last appointment, overseeing Stoke City’s 3-2 win over Brentford at the weekend.

Betting
Mansfield have been installed as 23/20 favourites for three points tonight, while you can get odds of 2/1 on a Barrow victory and the draw is priced at 5/2 with Sky Bet.

Barrow turned on the style to put Mansfield Town to the sword and claim their first Football League win in almost 50 years in impressive fashion on Tuesday night.

David Dunn’s men were irresistible at times, knocking the ball around with a swagger that The Stags rarely looked able to cope with as they enjoyed an eye-catching 4-2 triumph at The Once Call Stadium.

Hard work was at the core of the victory but some scintillating football ensured a thumping victory against a Mansfield side who were reduced to ten men during the second half of a largely one-sided affair.

Dunn chose to stick with an unchanged side after enjoying what he saw during Saturday’s 2-2 draw with Walsall – and the decision proved a good one as his players produced their best performance of the season in Nottinghamshire.

The home side attempted to get on the front foot in the early stages but Barrow settled very quickly and began to cause Town some problems going forward.

After some excellent work down the left, Patrick Brough was given the room to sling in a cross to the far post which was met by Brad Barry but he couldn’t direct his header and the home side cleared.

However, Town didn’t heed the warning and Barrow went in front on 10 minutes. Luke James charged forward to feed Josh Kay and his cross-shot towards the far post was gleefully slid in to the net by Barry.

The goal seemed to knock the stuffing out of Mansfield, allowing Barrow to really get on top – Kay and Biggins both tried their luck at extending the lead from long range as The Stags struggled to clear their heads.

Home keeper Marek Stech had to throw himself full length to his left to deny James after excellent work from Biggins, before Biggins himself drilled a free-kick in to the wall after James had been poleaxed as he looked to scamper through on goal.

Barrow looked like scoring every time they went forward and the second goal duly arrived midway through the half when Brough was allowed to advance towards the edge of the Mansfield box. When nobody came to close him down, the defender sent a sumptuous low drive in to the bottom corner from 25 yards.

The hosts were on the ropes and The Bluebirds continued to come forward; Kay could have made it 3-0 a minute later but his drive was held, before Dior Angus just couldn’t connect at the front post after good interplay with James.

However, Mansfield grabbed a lifeline ten minutes from half time when a free-kick was lifted in to the Barrow box and Matty Platt could only slice it skywards; it looped back towards Joel Dixon who attempted to grab it but the ball squirmed loose and James Perch smashed it in to the net from close range.

After a slow start to the second half, Nicky Maynard almost pulled Town level in spectacular fashion when he sent a powerful drive on goal from 25 yards which looked to be arrowing in to the top corner until Dixon brilliantly finger-tipped it on to the bar and it cannoned out to safety.

A minute later Mansfield’s task in turning the game around got more difficult when Aaron O’Driscoll left a late challenge on James and referee Keith Stroud had no option but to produce a second yellow card for the youngster and Town were down to ten men.

Barrow used the advantage to good effect and almost increased their lead  when James ran at the Mansfield defence before slipping a ball in to Kay; the wide man got his head up to find Angus but his shot was well saved by Stech.

The Town keeper was called in to action again moments later when James was allowed enough room to strike a powerful drive on goal but again Stech was equal to it and parried it away to safety.

The pressure told just after the hour mark as The Bluebirds once again stitched together a lovely move to feed Kay just inside the box and he produced a stunning, curling finish in to the top right-hand corner to give Stech no chance.

Barrow kept on threatening and they made sure of the win 11 minutes from time after working the ball inside from the right in to the path of Biggins, who stroked home a deserved first goal for the Club.

Substitute Chris Taylor could have added a fifth five minutes from time when he arrived twelve yards out to fire on goal but his effort flashed over the bar.

Town managed a consolation goal on 88 minutes when a cross from the right found Harry Charsley and he got just enough on his shot to see it roll in to the far corner beyond Dixon to make it 4-2. 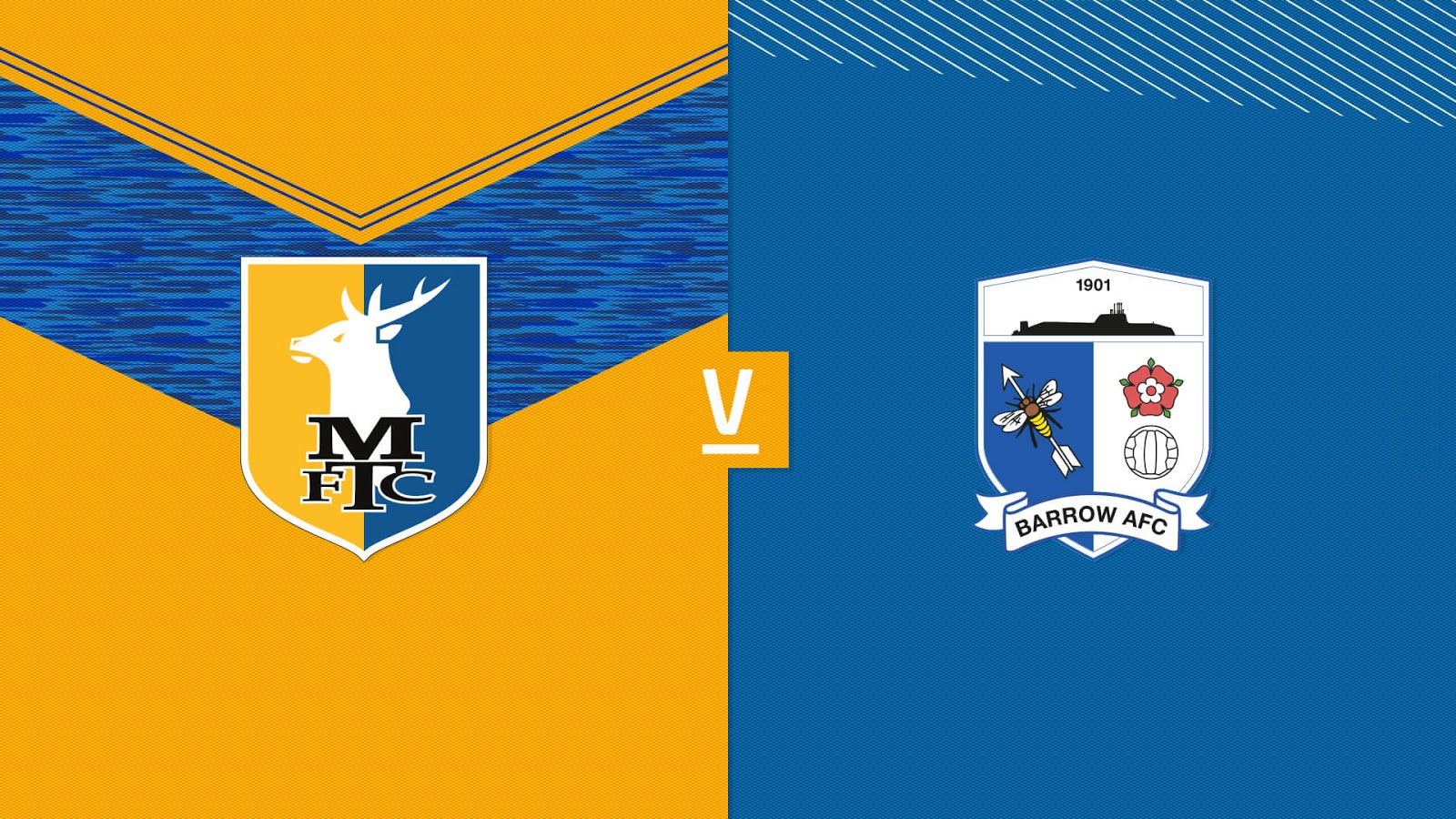 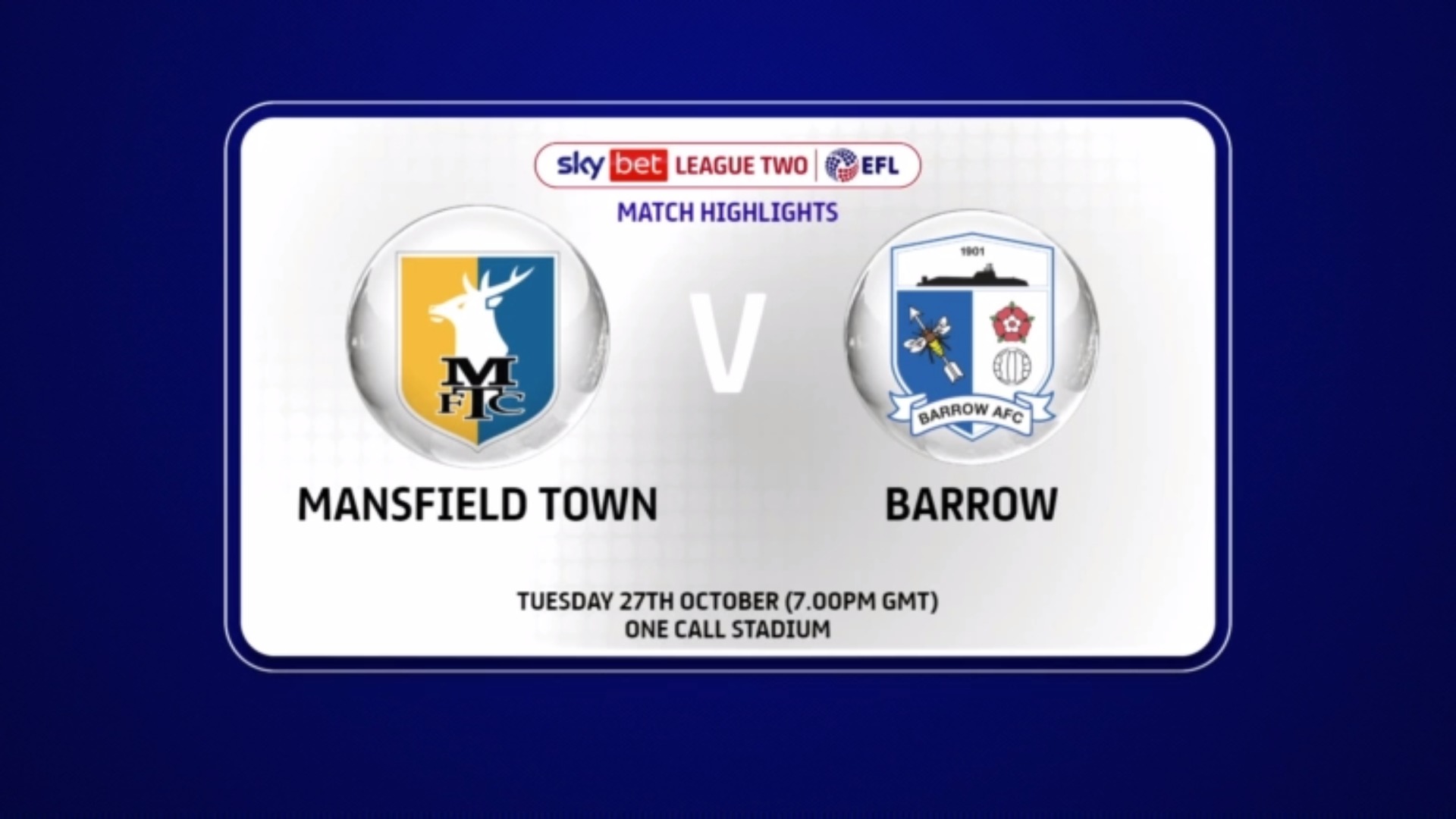 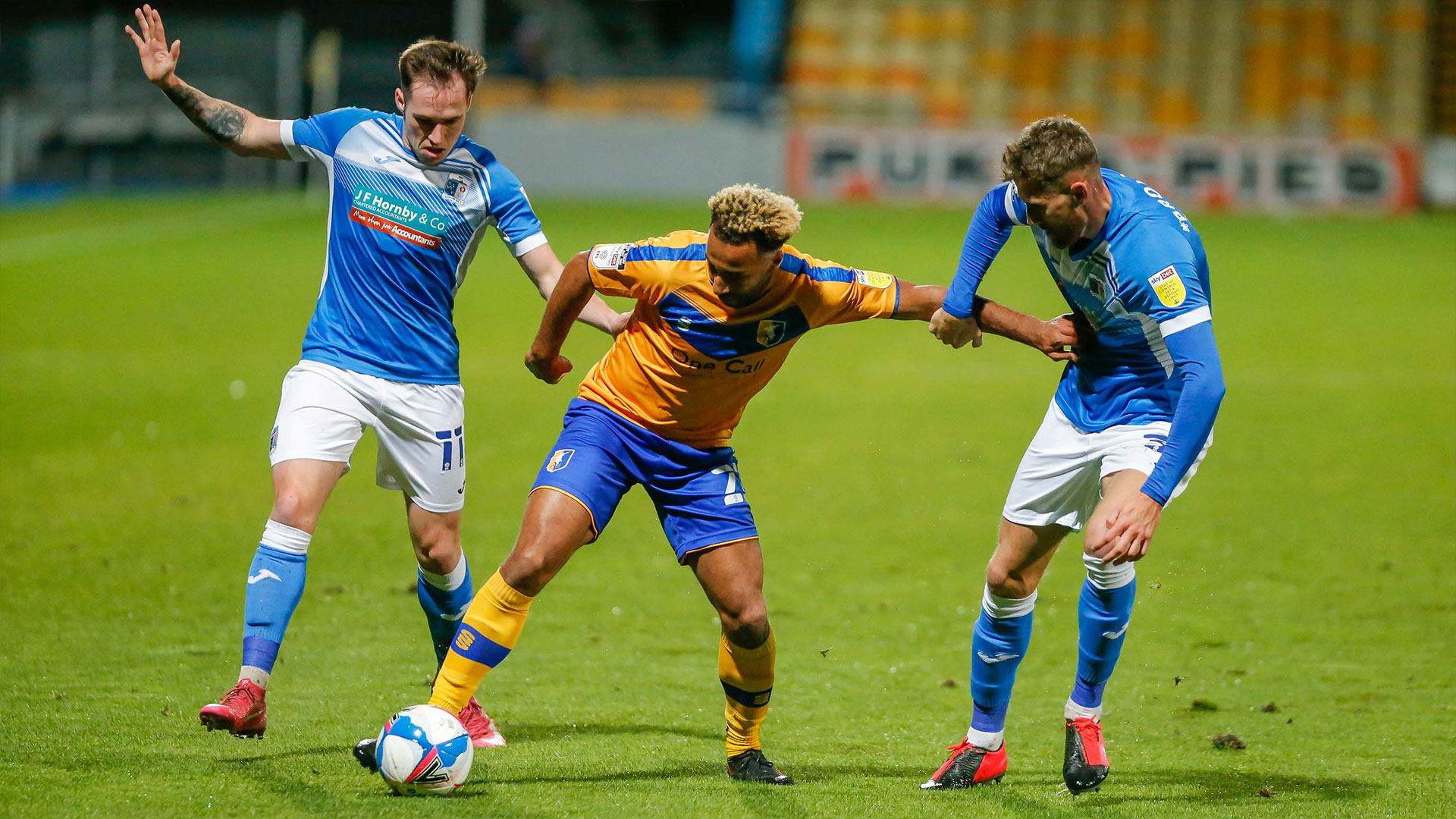