We take a closer look at the action as the Football League returns to Barrow on Saturday.

In Opposition
Stevenage were given a last-ditch reprieve during the summer after it had initially appeared they were to be relegated to the National League.

Misdemeanours at Macclesfield Town led to a points deduction for The Silkmen which saved Stevenage though and now they will be determined to make the most of their second chance.

Alex Revell has been given the go-ahead to revamp his squad during the summer months and there is genuine excitement building among Stevenage fans that 2020/21 can be a positive season.

Boro fans endured a terrible campaign last time around but the popular Revell has galvanised those around the Club during lockdown and now he will want to build on that feelgood factor when they return to League Two action.

Head To Head
Saturday’s game will be only the eighth competitive game between the sides, and the first since Barrow’s FA Trophy Final win back in 2010.

It’s Stevenage who have the edge historically having won four times in comparison to Barrow’s two triumphs, while The Boro have tasted victory on two of their last three visits to Cumbria.

One To Watch
Elliott List is now going in to his second season at Stevenage and he’s hoping he can build on a really positive opening week to the new campaign.

He was on target during their 3-3 draw with Portsmouth in the Carabao Cup and will definitely provide a goal threat for Alex Revell’s men this weekend.

The 23-year-old emerged from the Crystal Palace Academy but first made his name in the colours of Gillingham where he made over 100 appearances during a four-year stint.

Team News
David Dunn has a few injury concerns ahead of Saturday’s game against Stevenage at The Progression Solicitors Stadium.

Matt Platt and Josh Kay will both be assessed in the run-up to the game after picking up problems in last weekend’s Carabao Cup tie at Derby County. Scott Quigley is suspended.

Stevenage boss Alex Revell has the luxury of being able to pick from a fully-fit squad for their league opener this weekend.

Referee
Scott Oldham will be on the whistle for Saturday’s game against Stevenage in what will be his first visit to The Progression Solicitors Stadium since 2017.

The official took charge of our 1-0 home defeat to Southport  that day but has since done his refereeing in the EFL after making the step up for 2017/18.

His most recent outing came at the weekend when he oversaw Lincoln City’s 2-1 win at Crewe Alexandra in the Carabao Cup.

Betting
Barrow have been installed as 13/10 favourites for three points this weekend, with Stevenage a 19/10 shot and the draw priced up at 23/10.

Live Streaming
Season Ticket holders have all received a code enabling them to live stream Saturday’s game on iFollow, complete with commentary and replays.

Barrow were forced to settle for a point on their return to the Football League as Dior Angus’ early penalty was cancelled out by Inih Effiong’s late spot kick for Stevenage.

The Bluebirds looked on course to record a perfect return to the big time after leading from 11 minutes in but there was a sting in the tail as the visitors grabbed their leveller five minutes from time.

David Dunn was boosted by the timely return of Brad Barry from injury, while Tom Beadling, James Jones, Mike Jones and Kgose Ntlhe were handed their league debuts for the Club.

Barrow were first to show their teeth as a lightning fast counter-attack sent Lewis Hardcastle away down the right but his low ball across the six-yard box was just too far in front of Dior Angus and the danger evaporated.

The visitors responded quite positively and began to put some pressure on the Barrow backline but some determined defending frustrated the Boro forwards.

The Bluebirds could have doubled their lead when a corner from the right was whipped in to the middle of the area but Barry’s header flashed wide of the far post.

More good work from the industrious Hardcastle down the right flank created a moment on panic in the Stevenage area but his testing cross was headed away on the stretch by a defender.

Elliot List then got on the end of a ball in towards the front post for the visitors but he couldn’t direct his header on goal and it dropped harmlessly wide.

From the resultant corner, Kgose Ntlhe got up highest and met the ball with a firm header only to see it crash back off the post and Stevenage were able to clear.

Stevenage had an opportunity to level on 77 minutes when a free kick was swung in to the back post but Luke Prosser wastefully headed his effort over the bar.

With five minutes left Romeao Hutton was clipped in the area and the referee pointed to the penalty spot once again; former Bluebirds loan man Inih Effiong stepped up and coolly rolled the visitors level from twelve yards. 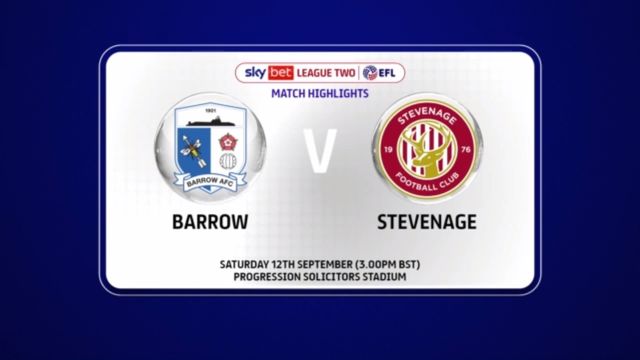 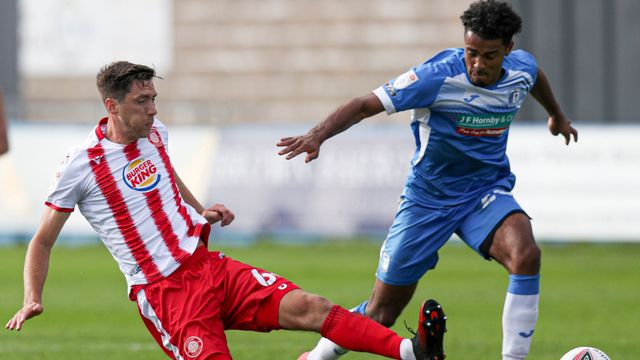