We turn our attentions to Saturday's action with a full and in-depth preview of Port Vale's League Two visit to The Dunes Hotel Stadium.

In Opposition
Port Vale have roared back into automatic promotion contention on the back of an impressive run of form in recent months which has seen them taste defeat just once in 15 League Two games.

The Valiants had slipped off the pace slightly following three consecutive defeats in January and looked resigned to challenging only for a spot in the play-offs.

However, four wins from their last five has helped move them fourth in the table and they’re now within touching distance of the division’s top three.

The Staffordshire outfit were also handed a boost this week with the news that boss Darrell Clarke is to begin a phased return to work following a period of absence due to a close family bereavement.

During Clarke’s absence, Assistant Manager Andy Crosby has stepped in to take interim charge and keep Vale on course for a return to League One for the first time since relegation in 2017.

One To Watch
Ben Garrity has become one of the stars of Port Vale’s charge towards the automatic promotion places having enjoyed a wonderful first season with the club.

The 25-year-old joined Vale for an undisclosed fee from Blackpool during the summer and has gone on to score an impressive 11 goals from midfield so far this term.

Liverpool-born Garrity was first spotted playing for Warrington where his form earned a move to Blackpool, though he gained League Two experience last term during a loan spell at Oldham Athletic.

Head To Head
This weekend’s game will be the 20th competitive encounter between the clubs and it’s Port Vale who have the edge historically having won 11 of the previous 19 fixtures.

The Bluebirds have to go back as far as the 1930s for their last home win over The Valiants, who ran out 2-0 winners during their League Two trip to Cumbria last April.

Barrow are also seeking some revenge on Saturday for the 3-1 defeat suffered at Vale Park back in October.

Referee
James Oldham will be in charge of a Barrow game for the second time this season on Saturday when he’s on the whistle for our contest with Port Vale.

Having stepped up from the National League at the beginning of 2019/20, Oldham is now into his third season on the EFL list of referees.

He oversaw The Bluebirds on the opening day of the current campaign when we were defeated 1-0 at Stevenage, whilst his most recent appointment was a fortnight ago when he saw Wigan Athletic thump Morecambe 4-1.

Tickets
Fans can buy their tickets online right now for Saturday’s game, while we’re also open until 4.30pm on Friday if you want to buy in-person from the Club or over the telephone.

On matchday, we are open to sell tickets at Main Reception (card payment only) from 10am and from the Ticket Booth in the Fan Zone (cash and card) from 12noon.

Fans will be able to listen to expert Bluebirds commentator Adam Johnson, who will be alongside John Goodwin in The Dunes Hotel Stadium press box to describe the action as it unfolds.

Betting
Port Vale have been installed as 23/20 favourites for three points on Saturday, with The Bluebirds rated a 12/5 shot for victory and a draw priced up at 21/10 with our friends at Sky Bet.

Phil Brown suffered defeat in his first home game in charge of The Bluebirds as in-form promotion-chasers Port Vale snatched a late winner at The Dunes Hotel Stadium.

Barrow produced a performance full of heart and spirit and looked on course for a big victory when Josh Kay celebrated his return to the line-up after injury with a dazzling opening goal.

However, Jamie Proctor volleyed in a leveller for the visitors after the break before Aaron Martin was in the right place at the right time to convert from close range two minutes from time to win it for The Valiants.

Brown opted to make three changes to his starting line-up as Josh Kay came back in after injury, while Tom Beadling returned from suspension and Anthony Glennon replaced the injured Patrick Brough.

A scrappy start to the game saw few clearcut chances but Vale’s Brad Walker almost provided a spark on seven minutes when he drilled a powerful shot from 25 yards which cannoned back off the post, struck Paul Farman on the back and then was cleared behind.

The Bluebirds began to settle into the game and had a couple of chances when Matt Platt first glanced a header wide via a deflection before planting another header straight at keeper Aidan Stone from the resultant corner.

On 17 minutes, Beadling almost opened the scoring when he ran on to a loose ball and fired a low shot just wide after Glennon’s hanging cross from the left wasn’t dealt with by the Vale defence.

The breakthrough arrived on 24 minutes when a high ball found Kay who took a perfect first touch before jinking inside away from his defender and firing a precise shot into the bottom corner of the net for 1-0.

The Bluebirds were good value for their lead and held it right through until the hour mark when Vale sprung brilliantly on the counterattack down the left and a hanging cross to the far post was met on the volley by Jamie Proctor and it flashed past Farman for 1-1.

Instantly, Vale should have been in front. James Wilson was put away clean through on goal and looked odds on to score only to send a low effort past the post and let Barrow off the hook.

John Rooney lofted a long-range free kick over the wall and just wide of the post as The Bluebirds tried to recover their composure before Farman had to dash from his line to brilliantly deny substitute Kian Harratt.

The game became more and more open as time wore on, with Brown throwing Josh Gordon and Luke James on as he looked for the win, and things remained in the balance as time ticked away.

There was heartbreak for Barrow on 89 minutes when Wilson slalomed past the home defence of the area and his ball across found its way to Aaron Martin at the far post and he was able to tap home from close range for 2-1.

The Bluebirds are back on home turf on Saturday to play host to Port Vale so make sure you’ve got your tickets to come along and support Phil Brown’s men.

We want another big and vocal crowd to get behind the players as Brown takes charge of his first home match as the fight continues to move away from the League Two danger zone.

The best way to snap up your tickets is to simply head online where you can print your ticket at home or just show the QR code direct from your mobile device at the turnstiles.

Tickets are available on matchday and you can buy from the Ticket Office at Main Reception (card payment only) from 10am and then from the Ticket Booth in the Fan Zone (cash and card) from 12noon.

Please be advised that there are no tickets available direct from the turnstiles. 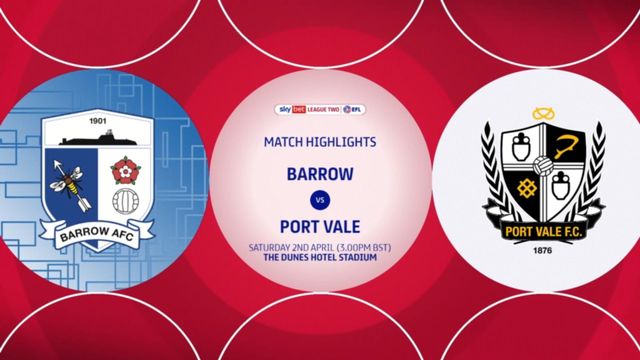 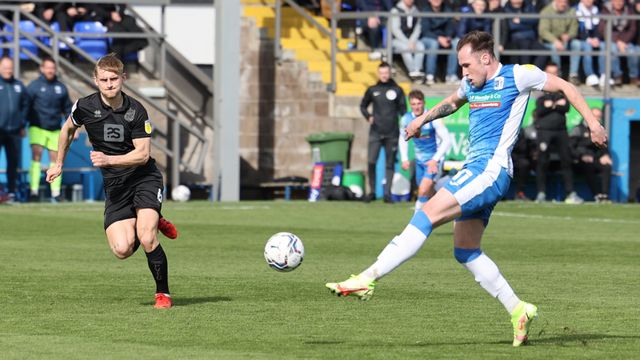