We turn our attentions to the weekend's action with a full and in-depth preview of Sutton United's League Two visit to The Dunes Hotel Stadium.

In Opposition
Sutton United have enjoyed a fantastic first season in the Football League after claiming a historic promotion in 2021/22 when they were crowned National League champions.

Matt Gray’s side were worthy title-winners last term and have rarely looked out of place at the higher level, meaning they are still in with a shout of clinching a second successive promotion.

Indeed, The U’s have run into strong form again in recent weeks and three consecutive victories have moved them within five points of third-placed Port Vale with a game in hand.

One To Watch
David Ajiboye’s goal settled things in Sutton United’s favour when they hosted Barrow at Gander Green Lane back in November and he’s a player who will need watching closely this weekend.

A tricky winger who can also play in a central attacking role, Ajiboye played a key role in last term’s National League success, so fans were delighted when he returned for another spell on loan from Millwall in the summer.

It’s the third time he’s been on loan at Sutton and he’s now passed 100 games for the club.

Head To Head
Barrow are looking to protect an unbeaten record in home games against Sutton United when the sides clash at The Dunes Hotel Stadium this weekend.

The U’s have made seven previous visits to Barrow and have yet to taste victory, with The Bluebirds winning four and three other encounters ending all-square.

Phil Brown’s side will be looking to get another win on Saturday to avenge the 1-0 defeat suffered at Gander Green Lane in November when David Ajiboye scored the only goal.

Referee
Experienced official Ben Toner will be the man in the middle for this weekend’s contest against Sutton United at The Dunes Hotel Stadium.

It will be Toner’s second visit of the season after he also oversaw our 1-1 draw with Scunthorpe United on home soil back in October.

Now into his seventh season on the EFL list of referees, Toner’s last appointment was last weekend when he presided over Sheffield Wednesday’s 3-2 win at MK Dons.

Tickets
Tickets for Saturday’s game are available to fans in advance online and from The Dunes Hotel Stadium which will remain open until 4.30pm on Friday afternoon.

Live Streaming
Due to restrictions over the broadcast of live Saturday afternoon football, unfortunately we will not be able to provide a live stream of our game against Sutton United to fans in the UK.

However, Bluebirds supporters based outside of the UK will be able to access a live video feed on iFollow as usual and can buy their Video Match Passes right now.

Live Commentary
iFollow is the only place that fans can listen to live online commentary of every game during this season’s run-in as we continue our link-up with our friends at BBC Radio Cumbria.

Fans will be able to listen to expert Bluebirds commentator Adam Johnson, who will once again be alongside John Goodwin as the pair describe all the action as it unfolds against The U’s.

Betting
Sutton United have been made marginal favourites for victory at 6/4 on Saturday, while you can back The Bluebirds at 7/4 or get money on the game ending in a draw at odds of 21/10

Click here now to take a look at a full list of Sky Bet’s markets ahead of Saturday’s game.

The midfield ace volleyed home on 68 minutes and that proved the decisive moment and set-up wild scenes of celebration at the final whistle though there was a wait for confirmation of their EFL fate after Oldham Athletic's game against Salford City was delayed.

A strong wind made things difficult, and chances were at a premium for both sides during a scrappy first half which was punctuated with very little flowing football.

John Rooney’s fierce corner from the right was met by Matt Platt eight yards out but his header looped up in the air and could have caused a problem but for some decisive goalkeeping from Dean Bouzanis.

Another Rooney delivery, this time from a left-wing free kick, was flicked on by Aaron Amadi-Holloway, but this time Bouzanis was able to watch it drop wide of his post.

Sutton quickly broke down to the other end and some hesitant Barrow defending presented Omar Bugiel with the best chance of the half, but he blazed a volley well over the bar.

The Bluebirds remained patient and some good work on the edge of the area from Amadi-Holloway helped engineer a shooting chance for Robbie Gotts, but his drive was off target.

There was a different feeling to the second half with Barrow enjoying the wind behind them and Rooney came close to opening the scoring within four minutes of the restart when his goalbound volley was superbly blocked by Ben Goodliffe.

From the resultant corner from the left, Rooney’s wicked in-swinging delivery almost went directly in at the near post, but Bouzanis did just enough to keep it out and Sutton cleared.

Sutton responded and could have broken the deadlock when Rob Milsom whipped a dangerous free kick across from the right which flashed just beyond Farman’s far post.

Midway through the second half the first goal did arrive. Brilliant play down the right from Josh Gordon – on in place of the injured Amadi-Holloway – fed Remeao Hutton into the box and his cross was gleefully volleyed home by Rooney.

There was a black mark on the goal as, following the celebrations, the referee produced a second yellow card for Josh Kay who was sent-off to leave The Bluebirds with ten men.

With 15 minutes left, Sutton were handed a lifeline when the referee awarded them a penalty, but Milson’s powerful effort was brilliantly parried away by Farman who had flung himself full-length to his left. A wonderful save.

Gordon could have made it 2-0 in sensational fashion on 84 minutes when he hooked the ball over his own head from the left touchline before running on to it himself and firing a powerful strike which flashed just over the bar.

There were unsavoury scenes from within the crowd during the closing stages which helped create stoppage time of 10 minutes during which Sutton pressed for a leveller.

However, despite even sending the keeper up for a corner, The U’s could not find a way to goal and The Bluebirds hung on for a crucial victory.

The Bluebirds return to home soil this weekend and you can now buy your tickets to come and cheer them on against Sutton United at The Dunes Hotel Stadium on Saturday (3pm kick-off).

Phil Brown’s men enjoyed a fantastic Easter weekend which saw them thrash leaders Forest Green Rovers and then take a point on the road against play-off hopefuls Salford City.

The four points have helped in the Club’s battle for EFL survival but now we need Bluebirds fans to get right behind us once again this weekend as the action continues.

It couldn’t be easier to get tickets for the game – simply head to our Online Tickets Portal now and you can choose whether to print them out at home or just show the QR code from your mobile device at the turnstiles.

Tickets will also be available on matchday from 10am at the Ticket Office at Main Reception (card payment only) and then from the Fan Zone Ticket Booth from 12noon (cash and card).

So, make sure you are part of what we’re expecting to be another cracking atmosphere at The Dunes Hotel Stadium on Saturday as The Bluebirds look to extend their unbeaten run against Sutton. 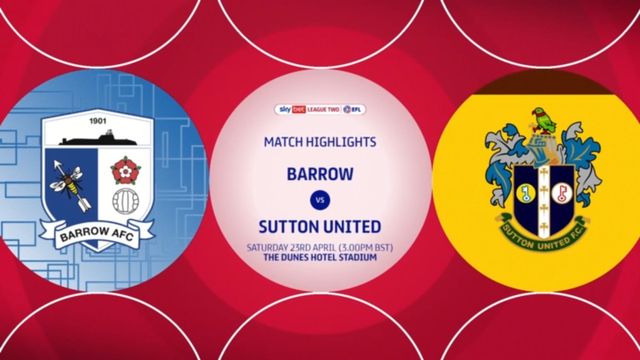