We turn the focus on Easter Monday with a full and in-depth preview of The Bluebirds' League Two trip to The Peninsula Stadium.

In Opposition
Salford City remain on the fringes of the League Two play-off zone despite a damaging defeat at promotion rivals Bristol Rovers on Good Friday.

Gary Bowyer’s men have found a greater consistency during the second half of the campaign and an undefeated sequence of seven wins from 11 has seen them drive back into contention for a top-seven finish.

The Ammies have ambitions to climb the leagues and, with three of their four remaining fixtures coming against teams in the bottom four, they will fancy their chances of snatching a play-off spot.

One To Watch
Front man Brandon Thomas-Asante has developed into a key player for Salford City since joining the club from Ebbsfleet United in September 2019.

The 23-year-old has scored a dozen goals in all competitions this term and fired his first career hat-trick in City’s 5-1 thrashing of relegated Scunthorpe United last month.

Thomas-Asante will be hoping he can add a few more to his tally to help The Ammies claim a place in the top seven and he’s a player The Bluebirds will have to keep a close eye on during Monday’s game.

Head To Head
The Bluebirds are looking to avenge the 2-0 defeat inflicted upon them by Salford City when the sides met at The Dunes Hotel Stadium in January.

The Ammies will be aiming to complete a league double over Barrow for the second season in succession after enjoying a couple of 1-0 triumphs last term.

Referee
Andy Haines will take charge of his third Barrow fixture of the season when he’s the man in the middle for our Easter Monday encounter at Salford City.

The experienced official has been refereeing across the EFL since 2007/08 and was also on the whistle when The Bluebirds lost 2-0 to Salford at The Dunes Hotel Stadium in January.

Haines’ most recent appointment came in League One last Tuesday when he oversaw Burton Albion’s goalless draw with Wigan Athletic at The Pirelli Stadium.

Tickets
Tickets for Monday’s game are no longer available in advance, but Bluebirds fans will be able to get terrace tickets on cash turnstiles at The Peninsula Stadium on the day of the game.

Click here for all the information you need on buying tickets for Monday’s game.

Live Streaming
We’re delighted to confirm that, due to the game being played on a Bank Holiday, we’re able to provide a live stream online to supporters both in the UK and abroad.

Our live coverage will come complete with replays of all key moments and expert commentary from BBC Cumbria’s Adam Johnson who will be behind the mic once more at Salford.

Fans will be able to listen to expert Bluebirds commentator Adam Johnson who will be there to describe the action as it unfolds at The Peninsula Stadium on Monday.

Betting
Salford City have been installed as 17/20 favourites for three points on Monday, while Barrow are a 16/5 shot for victory and a draw is priced up at 23/10 with our friends at Sky Bet.

Click here now to take a look at a full list of markets ahead of this Monday’s game.

Barrow collected a precious point but could have had all three after coming from behind to lead at Salford City only to be denied with a minute to go at The Peninsula Stadium.

Second half strikes from Josh Gordon and Aaron Amadi-Holloway seemed to have put Phil Brown’s battlers on course for a crucial victory after Ryan Watson’s deflected shot had seen The Ammies lead at the break.

However, City substitute Ian Henderson nabbed an 89th minute leveller for the home side and the near-1000 travelling fans had to be content with a point.

Barrow began on the front foot and could have snatched an early lead when Robbie Gotts’ low cross caused panic in the City area and led to a real scramble before the hosts were finally able to clear.

Patrick Brough’s long ball forward was nodded down by Aaron Amadi-Holloway into a dangerous area inside the box, but nobody could profit, before Josh Kay dragged an effort wide from distance as The Bluebirds dominated the early stages.

Kay again went close on 18 minutes when he was sent clear down the left and cleverly ducked inside on to his right foot to let fly with a low drive which was well blocked by keeper Tom King.

The Ammies were under pressure from every Barrow set-piece and John Rooney’s right-wing corner was only half-cleared to the arriving Connor Brown but his effort under pressure flew wide.

City then put together their first meaningful attack and stole the opening goal. The ball dropped kindly for Ryan Watson who had a swing at it but scuffed his shot, only for it fall back into his path for a second attempt which picked up a deflection to wrong foot Paul Farman and find the net.

Kay had another opportunity when he stretched to reach a ball at the far post but couldn’t find the power to trouble King, while Niall Canavan got on the end of a deep Rooney corner only for his goalbound header to be whacked clear by a defender on the line.

Matthew Lund could have doubled City’s lead on 34 minutes when he took control from a long throw-in from the left but, after finding space for the shot, he wastefully steered the effort too high.

The Bluebirds almost got back level four minutes after the break in ridiculous circumstances. Tom Beadling chased on to a loose ball down the middle and, in trying to clear, Corrie Ndaba contrived to hook the ball on to his own cross bar and over from 25 yards in a real let-off for the home side.

Brough then came within a whisker of levelling things up when he got across his man at the near post to meet Rooney’s left-wing corner, but his glancing header flashed agonisingly wide of the far post.

City’s first attack of the second period came when Ndaba drove forward towards the edge of the box before stabbing an effort just wide of Farman’s upright.

The game was all-square on 66 minutes as Josh Gordon made an instant impact from the bench. The front man had been on less than a minute when he met Rooney’s wicked free kick in from the left to bring The Bluebirds back on level terms.

With seven minutes left, Phil Brown’s men hit the front for the first time. George Williams dribbled masterfully at the home defence before timing the release of his pass perfectly to set Amadi-Holloway through on goal and he planted a firm finish into the net to send the visiting hordes wild with delight.

The Ammies then laid siege to the Barrow goal and were denied on numerous occasions before a real scramble inside the six-yard area on 89 minutes saw Ian Henderson deliver a decisive touch which was adjudged to have crossed the line and brought City level.

Brown’s side tried to go again, and Gotts lashed a powerful drive from 20 yards which flashed wide as the clock ticked through to full time.

Here are all the ticket details you need if you want to cheer The Bluebirds on at The Peninsula Stadium on Easter Monday.

Almost 600 tickets were snapped up in advance for the fixture but fans will still be able to buy for the terrace on the day of the game via Salford's cash turnstiles.

All tickets for collection will be made available on Monday at Salford’s Away Ticket Collection point, which is near the away turnstiles.

Fans are also advised that the bar outlet within the away end at The Peninsula Stadium is also cash only.

Away Travel
The Bluebirds Trust are organising coach travel for Monday's game at The Peninsula Stadium. 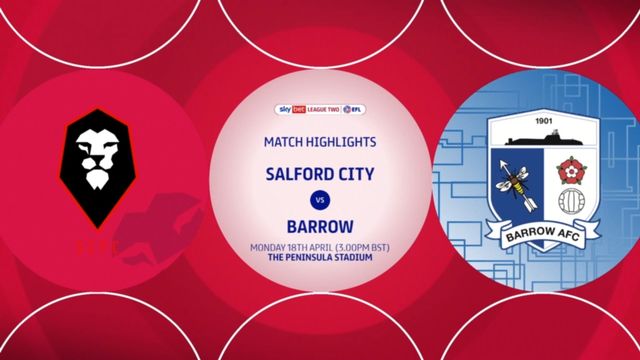 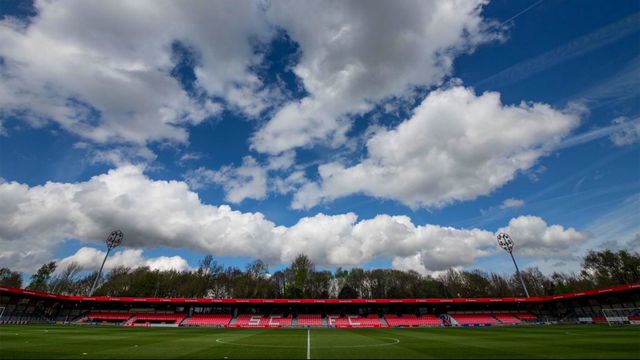