Take a look at everything you need to know ahead of Saturday's game with our full and in-depth preview of Hartlepool United's visit to Holker Street.

In Opposition
Hartlepool United clinched a glorious return to the Football League last term when they overcame Torquay United on penalties at the end of a dramatic National League Play-Off Final in June.

It marked the end of four-year absence for Pools, who has slipped out of League Two in heart-breaking circumstances at the end of the 2016/17 campaign.

The appointment of Dave Challinor in November 2019 proved the catalyst for promotion as he quietly set about building a robust squad capable of challenging at the top of the National League.

They had to do it the hard way in the play-offs after finishing fourth, but they saw off both Bromley and Stockport County to reach the Final at Ashton Gate which went their way on spot kicks.

Challinor’s men enjoyed an encouraging start to their League Two campaign last weekend when over 5,000 watched them defeat Crawley Town on home soil thanks to Gavan Holohan’s late strike.

One To Watch
Long-serving midfielder Nicky Featherstone has overcome the doubters to become a huge fans’ favourite at Victoria Park and he has recently been installed as the new Club Captain.

Featherstone has been patrolling the Victoria Park engine room since 2014 and promotion last term tasted sweeter for him having played in the team which was relegated four years ago.

A stylish performer who can dictate games from the centre of the park, The Bluebirds will need to ensure he doesn’t have that level of impact at Holker Street this weekend.

Head To Head
Saturday’s game will be the 92nd competitive meeting between the two sides and Hartlepool have the edge historically having won 37 times in comparison to The Bluebirds’ 33 triumphs.

The Victoria Park outfit won on their last visit to Holker Street thanks to Ryan Donaldson’s second half goal but this weekend will make the first EFL meeting since April 1972.

Referee
Rebecca Welsh will take charge of her first EFL game of the new season when she is on the whistle for this weekend’s encounter with Hartlepool United at Holker Street.

A highly respected official, Welsh made history towards the end of last term when she became the first female referee to oversee a Football League game.

Tickets
Barrow fans can save money by buying tickets for this game in advance, either online or from Main Reception.

Fans will be able to listen to expert Bluebirds commentator Adam Johnson, who will be joined by John Goodwin for full coverage of Saturday’s game against Hartlepool.

Betting
Barrow have been installed as 29/20 favourites for three points this weekend, while Pools are rated a 7/4 shot for victory and the draw is priced at 9/4.

Dimitri Sea came off the bench to settle an entertaining encounter against Hartlepool United as The Bluebirds ran out 3-2 winners at The Dunes Hotel Stadium.

Offrande Zanzala and Josh Gordon both scored their first goals for the Club during the pulsating encounter which saw the League Two new boys twice come from behind to level.

However, Sea’s finish from six yards 18 minutes from time proved decisive and Mark Cooper was able to enjoy his first league win in the hotseat.

The Bluebirds got off to the perfect start when Zanzala showed his power and pace to burst clear down the right-hand side before keeping his composure to wriggle along the edge of the Pools box to fire a clinical low finish into the bottom corner of the net with just over two minutes on the clock.

However, Mark Cooper’s men could not capitalise on the early boost and the visitors were allowed to feel their way back into the game and began to look a threat at the other end.

That danger came to fruition on 17 minutes when Jamie Sterry delivered a wicked cross to the far post where Tyler Burey was able to stoop to head home his first Pools goal and level things up.

The equaliser gave Dave Challinor’s men further confidence, and they could have stolen in front when a cross from the left was met by debutant Will Goodwin, but his looping header was comfortably held by Paul Farman.

There was a wonderful opportunity for The Bluebirds to restore their lead on 34 minutes when Remeao Hutton got forward on the right to send a testing cross to the back post where Mark Ellis rose highest but put his header across goal and agonisingly wide.

Just as in the first half, Barrow enjoyed a wonderful start to the second period. A ball into the edge of the box was collected by Zanzala who fed it to Patrick Brough on the left whose first time cross found Josh Gordon at the far post and he stooped to nod in his first goal in Bluebirds colours.

There was a moment of panic at the other end not long afterwards when Sterry let fly from a long-range free kick and his effort took a deflection but did not fool Farman who readjusted to gather.

Once again though, the visitors came roaring back at Barrow. A ball was sent into the area for Mark Shelton who did well to control it on his chest and then cleverly clip a pass into the feet of Goodwin and he applied a clinical finishing touch.

A topsy-turvy game took another twist on 72 minutes when Ellis swivelled to shoot on the edge of the box and, when his shot hit Gordon’s heels, it fell perfectly for substitute to Dimitri Sea to ram the ball home from close range to make it 3-2.

There were nervous moments for Barrow, particularly during 10 minutes of stoppage time as Pools threw on defender Jake Lawlor up front, but Cooper’s men held on to clinch their first League Two win of the campaign. 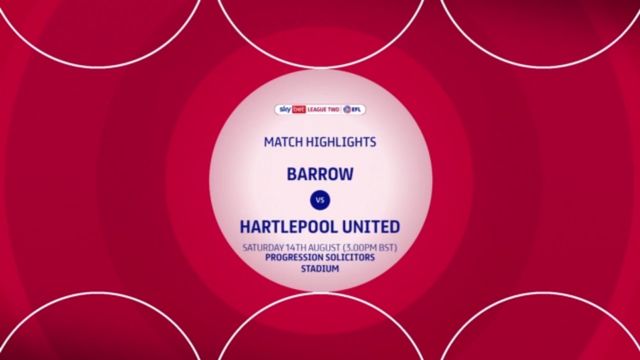 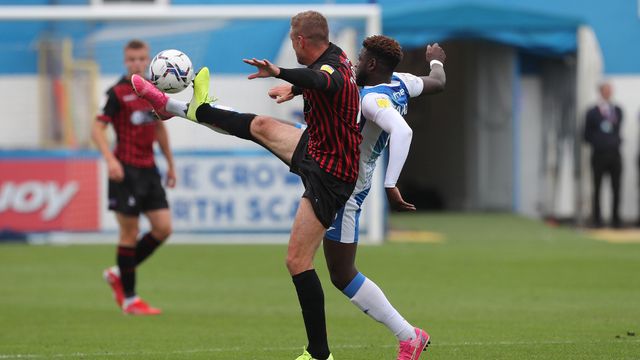