Check out everything you need to know ahead of Saturday's game with our full and in-depth preview of the action at The EnviroVent Stadium.

In Opposition
Harrogate Town will finally get back out on the pitch this weekend after a COVID-19 outbreak within their camp meant an enforced break of two weeks and the postponement of three fixtures.

Simon Weaver’s men had got off to a positive start on the opening day of the new campaign when they overcame Rochdale 3-2 on home soil – but their bad luck off the pitch means they haven’t played since.

Five players tested positive for the virus and five others had to self-isolate during a frustrating period for Town but thankfully the situation is now back under control, and they returned to group training earlier this week.

After finishing their first season in the EFL in a respectable 17th position, ambitious Harrogate will be hoping they can have a say in the top half of the League Two table during 2021/22.

One To Watch
Luke Armstrong was a promotion here on loan at Hartlepool United last season before opting to make a permanent move to Harrogate Town from Salford City during the summer.

The prolific front man helped himself to 15 goals in 32 appearances as Pools regained their place in the Football League and now he’s ready to show he can cut it at the higher level.

Armstrong – son of former Middlesbrough and Ipswich Town striker, Alun – enjoyed a dream start to life in a Harrogate shirt when he scored inside five minutes of the opening day win over Rochdale.

Head To Head
The Bluebirds will be looking for a little revenge this weekend after Harrogate Town completed the League Two double over them last season with a couple of 1-0 wins.

Indeed, Town have had it their own way in the majority of meetings between the clubs since Barrow’s 6-2 FA Trophy triumph in December 2016.

Barrow’s last league win over the North Yorkshire outfit came during the opening month of the 2013/14 season when Sam Sheridan’s goal gave us a Bank Holiday Monday 1-0 victory.

Referee
Trevor Kettle will be on the whistle at Harrogate Town this weekend as he oversees Barrow’s League Two visit to The EnviroVent Stadium.

The experienced official is now in to his 19th season on the EFL list of referees and he’s taken charge of three games so far during the 2021/22 campaign.

Kettle’s last appointment came in League One in midweek when he saw Portsmouth overcome Shrewsbury Town 1-0 at Fratton Park.

Tickets
Tickets for Saturday’s game will be available from the Harrogate Town Ticket Office prior to kick-off on Saturday.

Live Streaming
We are unable to live stream games on iFollow in the UK on Saturday afternoons, though Bluebirds fans outside of the country can still access live footage.

Fans will be able to listen to expert Bluebirds commentator Adam Johnson, who will be joined by Mark Boyd for full coverage of Saturday’s game at The EnviroVent Stadium.

Betting
Harrogate Town have been made slight favourites for three points at odds of 7/5, but Barrow aren’t far behind at 7/4 to take the win and a draw is priced up at 23/10 with our friends at Sky Bet.

Offrande Zanzala’s early goal wasn’t enough to prevent Barrow from slipping to defeat at The EnviroVent Stadium as Harrogate Town came from behind to claim three points.

Things looked good for The Bluebirds when Zanzala prodded home his second goal of the season from six yards on 17 minutes but two goals from Alex Pattison – and a touch of good fortune – helped the home side celebrate their return to action following a COVID-19 outbreak with victory.

There was a disrupted opening to the game as home defender Lewis Page picked up a nasty facial injury in an accidental clash just seconds after kick-off and he was forced from the field after initially trying to play on.

The hosts took a while to get into their stride as a result but Danilo Orsi did test Paul Farman with a curling shot from the left corner of the box, but it was never likely to trouble the Bluebirds’ keeper.

Instead, it was Barrow who went on to take the lead on 17 minutes. Josh Gordon worked hard to win the ball back in a dangerous area and spread it wide to Patrick Brough and the wing-back slung an inviting cross into the far post where Zanzala stretched to prod home the opener.

Town responded well but Mark Cooper’s men continued to be a nuisance on the break and Gordon almost embarrassed home keeper Mark Oxley after a short back-pass from Rory McArdle but the front man’s challenge sent the ball spiralling away from goal, to the home side’s relief.

Farman then pulled off an outstanding save at the other end to deny Town’s summer signing Luke Armstrong his second goal in Harrogate colours, diving full length to tip his drive wide as it looked destined for the top corner.

Barrow were a constant menace when going forward and almost found their second goal from a left-wing corner which caused chaos in the Harrogate box and almost fell kindly for Gordon before the hosts smuggled it clear.

The Bluebirds were being made to work hard to protect their lead as Harrogate worked the ball down both flanks but could have stolen a second goal on the counterattack when the nicked possession and raided down the left but Ollie Banks sent a shot too high.

Farman and Zanzala both picked up yellow cards as they attempted to eat up a little time before the break. However, Harrogate could have levelled inside the eight minutes of stoppage time when the ball fell to Connor Hall from a corner, but his first effort was well blocked by Farman and his follow-up flew wide.

There was a greater intensity to Harrogate at the start of the second period but it was Barrow who had the first meaningful effort on goal as Brough saw his shot from the edge of the box deflected just over the bar.

Lovely football from Gordon set Barrow away on another attack as Josh Kay cleverly skipped clear of a defender and bore down on goal only to send his effort wide of the target and let Town off the hook.

Town pulled level on the hour and there was more than a touch of fortune about it. Armstrong broke away down the left and tried to cross but his low ball was blocked and fell to Alex Pattison and his first-time drive took a wicked deflection and looped high into the sky before deceiving Farman and dropping beyond him into the net.

Barrow tried to get back on the front foot immediately and Remeao Hutton whipped a dangerous cross into the box from the right but could Kay just couldn’t stretch enough to apply a decisive touch.

George Williams came off the bench and almost made an instant impact as he struck an instinctive volley on goal as the ball dropped over his shoulder and it drew a fine save from Oxley.

Luke James then came off the bench to threaten the Town defence, getting on the end of Williams’ low cross from the right and sending a crisp volley on goal which was well parried by Oxley.

On 81 minutes the home side went in front for the first time. Joe Grayson found himself surrounded in midfield and Town won possession to storm forward towards the edge of the box where Pattison rifled a powerful finish beyond Farman and make it 2-1.

Barrow gambled in the closing stages, even throwing on Festus Arthur up front, but not could not breach a stubborn Harrogate rear-guard and the home side could have grabbed a third on the counter had it not been some alert keeping from Farman to smother at Aaron Martin’s feet. 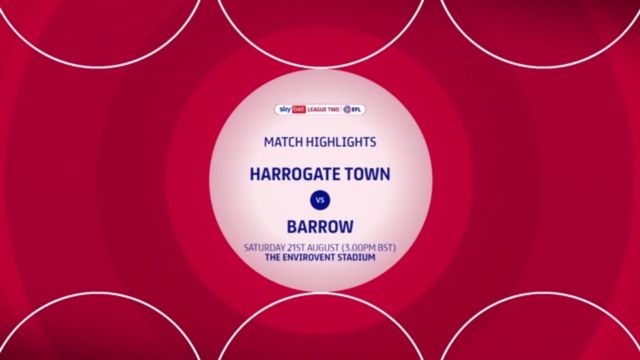 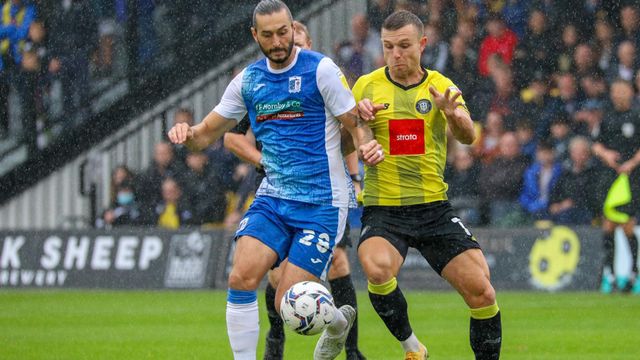