We turn our attentions to Saturday's game with a full and in-depth preview of Swindon Town's visit to The Dunes Hotel Stadium.

In Opposition
Swindon Town arrive in Cumbria this weekend looking to shake off a surprise 4-1 defeat at Leyton Orient on Tuesday night which saw them slip a place to fifth in League Two.

The Robins have their eyes on an instant return to League One following last season’s relegation and, under new boss Ben Garner, have made an encouraging start to 2021/22.

Tuesday’s loss at Orient was their first away reverse of the season in the league so they will be keen to bounce back quickly when they visit The Dunes Hotel Stadium on Saturday.

One To Watch
Swindon Town pulled off a transfer coup during the summer when they persuaded Welsh international Jonny Williams to sign a deal at The County Ground.

The former Crystal Palace youngster was part of the Wales squad which reached the semi-finals of Euro 2016 and also played in the delayed Euro 2020 tournament.

A creative player who can unlock defences and chip in with goals, Williams is one Town star that the Bluebirds defence will need to keep tabs on this weekend.

Head To Head
Saturday’s game will be the first meeting between the two clubs since they shared a division during the 1968/69 campaign.

The Robins have won two of the previous four meetings, with Barrow tasting victory once and the other meeting ending in a draw.

Referee
It will be Ollie Yates’ first visit of the season to The Dunes Hotel Stadium this weekend when he’s the man in the middle for our League Two meeting with Swindon Town.

Yates was promoted from the National League for the 2016/17 campaign and has operated across Leagues One and Two so far this term.

His most recent appointment came at The Stadium of Light as Sunderland thumped Morecambe 5-0 on Tuesday evening.

Tickets
Tickets for the weekend game are available in advance online right now, from Main Reception from 12noon on Saturday (card payment only) and the Fan Zone Ticket Booth (cash and card payment).

Live Streaming
We are not allowed to stream the game in the UK due to Saturday broadcast rules but fans outside the country will be able to access live footage as usual on iFollow.

Click here to add your International Video Match Pass ahead of kick-off.

Fans will be able to listen to expert Bluebirds commentator Adam Johnson, who will be joined by John Goodwin to describe all the action as it unfolds against The Robins.

Betting
Swindon Town have been installed as 29/20 favourites for three points on Saturday, with Barrow priced up at 23/10 and the draw available at odds of 29/20 with our friends at Sky Bet.

Barrow got back to winning ways as Ollie Banks and Josh Gordon were on target in a thumping victory over high-flying Swindon Town at The Dunes Hotel.

Both goals came from the penalty spot in an encounter which boiled over after the final whistle with Town’s frustrated skipper Dion Conroy shown a straight red card.

Robins boss Ben Garner had claimed Swindon should be presented with the three points if bad weather meant the game was postponed on the day. However, there was never much chance of either event occurring, as his side were convincingly beaten for a second successive game.

Swindon showed early on their comfort on the ball and began knocking it around with the confidence of a side who had only been beaten once away from home all season.

However, The Bluebirds grew into it and threatened first when Offrande Zanzala and Robbie Gotts linked-up well on the edge of the penalty area but the Town defence just about closed the door on the opportunity and were able to clear.

The dangerous Jack Payne tried a clever effort from a free kick on the right, whipping a shot towards the near post in an attempt to catch Paul Farman out but the Barrow stopped was equal to it.

There were big appeals for a Barrow penalty on 14 minutes when the lively Gotts skipped into the Swindon box and went down under a challenge, but the referee was well placed and uninterested.

Barrow continued to press though and put together some good football at times; Gotts and Zanzala again combined well to open up The Robins’ defence only for Gotts to drill a shot just too high from 20 yards.

Swindon responded when a nice move down the left freed Tyreece Simpson and he drove into the Barrow box before electing to shoot from a narrow angle and he could only find the side-netting with the effort. Ben Gladwin also dragged a shot wide as the visitors showed some menace.

However, Barrow were soon back on the front foot and a lovely ball from Gotts freed Jordan Stevens on the right of the penalty area, but some good defending saw his powerful drive blocked.

Farman was then called into action at the other end when some Swindon pressure led to a low shot from Kaine Kesler-Hayden which picked up a deflection before the Bluebirds keeper excellently pushed it round the post.

Cooper’s side produced more good play in first half injury-time as Gotts found space on the right of the box to deliver a low ball across the face of goal but Stevens couldn’t connect cleanly with his first-time shot and Town survived.

Barrow were forced into a half time change as Mark Ellis was replaced by Matt Platt, but it was fellow defender Joe Grayson who almost opened Town up on 54 minutes when he drove through the visitors’ defence before prodding an effort just wide.

The Bluebirds began knocking it around with a little bit of a swagger and got their rewards just after the hour mark when the excellent Gotts showed great tenacity to drive to the left byline before drilling a cross into the box which struck a defender’s arm. The referee pointed to the penalty spot and Ollie Banks gleefully rammed home the kick to end Barrow’s run without a goal and put them 1-0 up against The Robins.

It could even have been 2-0 on 72 minutes when Barrow again worked the ball forward well and Gotts drilled a shot on goal which took a deflection before hitting the base of the post and coming out.

The points were safe three minutes from time when Barrow stormed upfield on the counter-attack and Josh Gordon teed up Remeao Hutton to shoot. His effort was saved and then Patrick Brough was upended from the follow-up to provide The Bluebirds with a second penalty. Gordon took responsibility this time and he casually stroked home to make it 2-0.

Barrow could even have crowned their victory in the final minute when Hutton released Banks through on the right of goal, but his effort flashed just too high to trouble goalkeeper Jojo Wollacott.

Here are all the details you need to buy tickets for Saturday's game against Swindon Town at The Dunes Hotel Stadium.

After the disappointment of Wednesday evening’s postponement, The Bluebirds are due to be back on home soil on Saturday when they play host to Swindon Town (3pm kick-off).

Tickets for the big League Two fixture are on sale right now, with fans able to buy from our Online Tickets Portal or direct from Main Reception at The Dunes Hotel Stadium. 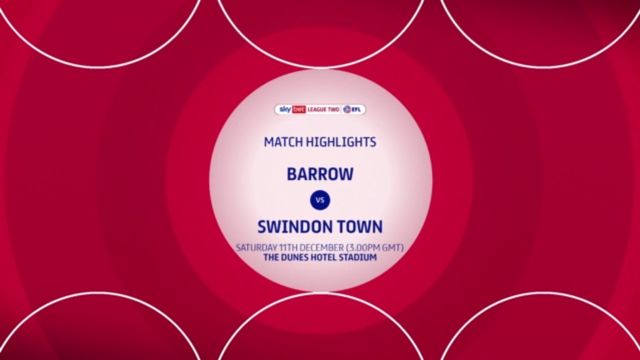 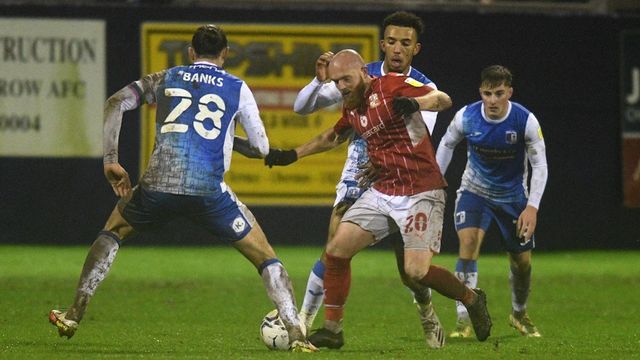