We turn our attentions to the midweek action with a full and in-depth preview of The Bluebirds' League Two visit to Victoria Park.

In Opposition
Hartlepool United enjoyed a glorious return to the EFL at the end of last season as they overcame Torquay United in a dramatic Play-Off Final penalty shootout at Bristol City’s Ashton Gate.

The Victoria Park outfit nearly went out of business following their relegation to the National League in 2017 but found a way back under the remarkable stewardship of Dave Challinor last term.

Challinor defected to ambitious Stockport County at the start of November and Pools subsequently turned to former player Graeme Lee to take the reins at the North-East club.

Since then, Lee has overseen a memorable FA Cup journey which came to an end at Premier League Crystal Palace on Saturday, while they are also through to the semi-finals of the Papa John’s Trophy.

However, replicating cup form in the league has not been straightforward and Pools have collected just once in their last 13 League Two outings ahead of this evening’s meeting with The Bluebirds.

One To Watch
Hartlepool’s search for a new striker during the January transfer window saw them pay Doncaster Rovers an undisclosed fee to take Omar Bogle to Victoria Park.

Bogle made his name during a goal-laden spell at Grimsby Town as they won promotion from the National League, and he went on to make big-money moves to Wigan Athletic and then Cardiff City.

A powerful front man with a keen eye for goal, Bogle is yet to open his account for Pools in his first two games but Barrow will need to stay focused to ensure he doesn’t get off the mark tonight.

Head To Head
The Bluebirds edged an entertaining encounter between the sides 3-2 at The Dunes Hotel Stadium in the opening month of the campaign in what was the first meeting at Football League level since 1972.

Pools did win on their last visit to Barrow when the sides clashed in the National League in September 2019 when they took the points thanks to Ryan Donaldson’s breakaway goal.

In total, the clubs have met some 92 times in competitive action in fixtures dating back to the first season in Division Three North in 1921/22.

Referee
Peter Wright will oversee his second Barrow game of the current season this evening when he’s on the whistle for our trip to face Hartlepool United at Victoria Park.

The official, who is into his fourth season on the EFL’s list of referees, also took charge of The Bluebirds during our 1-1 draw with Leyton Orient at The Dunes Hotel Stadium in October.

His most recent appointment came at the end of last month when he saw Stevenage score three unanswered goals past Harrogate Town at The Lamex Stadium.

Tickets
Fans can buy their tickets for tonight’s game now via the hosts’ Online Tickets Portal, while there will also be availability from the Victoria Park Ticket Office ahead of kick-off.

Live Streaming
We’re delighted to confirm that fans in the UK and abroad will be able to watch all the action from Victoria Park live online with us on iFollow.

Midweek games are available for us to stream live so you can watch for yourself as Mark Cooper’s men look to back up their win on the road at Northampton last week with another in the North-East.

Video Match Passes are on sale right now priced at just £10 and every fan who buys one will be directly supporting The Bluebirds.

Live Commentary
We are also providing live online audio commentary from every game this season on iFollow as we continue our broadcast partnership with BBC Radio Cumbria.

Fans will be able to listen to expert Bluebirds commentator Adam Johnson, who will have former Bluebirds boss Lee Turnbull alongside him at The Vic this evening.

Betting
Hartlepool United have been installed as 11/8 favourites for three points this evening, with Barrow rated a 2/1 prospect for victory and a draw priced up at 21/10 by our friends at Sky Bet.

John Rooney scored his first goal since returning to Barrow in spectacular fashion against Hartlepool United, but it wasn’t enough to prevent The Bluebirds slipping to defeat at Victoria Park.

The midfield ace sent a dazzling lobbed effort into the net from 40 yards to give Barrow the lead in the North-East, but the home side came roaring back to lead 3-1 by the break and hold that advantage through to the finish.

Mark Cooper made two changes to his starting eleven as Niall Canavan made his debut in place of the injured Tom Beadling, while Jacob Wakeling came in to the side up front.

The home side began at pace and The Bluebirds found themselves having to work hard during the opening exchanges as Pools moved the ball about quickly.

Slowly but surely, Cooper’s men got a foothold though – and Remeao Hutton was first to have a go on goal when he cut in from the right only to strike a left-footed shot over the bar.

Luke Molyneux was a constant threat for Pools though and when he cleverly spun away down the left and cut a dangerous ball back into the box, Tom Crawford saw a shot well blocked before Joe Grey’s follow-up clipped the bar on its way over.

However, on 17 minutes John Rooney officially announced his return to Barrow. Collecting the ball just inside the home side’s half, the midfield man spotted keeper Ben Killip off his line and sent an exquisite lob over his head and into the net in front of the celebrating Bluebirds fans.

The goal encouraged Barrow further and it could have been 2-0 minutes later when Anthony Glennon’s wicked corner from the right went all the way across goal and found Patrick Brough at the back post, but he couldn’t force it home.

Then Hutton burst into space down the right and fired a lovely cross into the front post which was gathered by Aaron Amadi-Holloway, who then spun swiftly to fire a low shot on goal which was brilliantly saved by Killip.

The save proved a turning point because on 27 minutes the hosts were level. Molyneux meandered over the right to collect possession and then engineered some space to shoot from the edge of the box, finding the near bottom corner of the net to make it 1-1.

Pools then took back control of the game five minutes before half time they grabbed a second goal when Jamie Sterry’s low cross from the right wasn’t fully cleared, and Omar Bogle was there to steer a low shot past Paul Farman.

It got worse a minute before the break when again Molyneux was allowed time on the edge of the area to shoot, and he worked the ball on to his left foot before curling a wonderful shot into the top corner for 3-1.

Barrow introduced Robbie Gotts for the start of the second half but it began in cagey fashion and neither side managed to create as much as they had before the break.

Gotts almost got in behind the Pools defence only for home skipper Neill Byrne to shut the door on him, while at the other end Molyneux had a chance to grab his hat-trick when he got in down the right but blazed his effort over the bar.

Rooney caused a moment of panic in the Pools penalty area ten minutes from time when his in-swinging delivery dropped inside the six-yard box but nobody in pink could get a decisive touch and the hosts were able to clear.

However, the ball was quickly worked back into the edge of the area for Luke James, and he turned to fire low on goal only to see his shot brilliantly saved by Ben Killip as it ricocheted up and out off the bar.

Pools could have added a fourth in stoppage time when he jinked into space on the edge of the area, but his effort on goal was deflected wide.

Here are all the ticket details you need if you want to cheer on The Bluebirds during their Sky Bet League Two fixture at Victoria Park.

Tickets for our game against Hartlepool United at Victoria Park on Tuesday 8th February (7.45pm kick-off) are on sale now to Barrow supporters via the hosts’ Online Ticket Portal.

We have an allocation of just over 800 seated tickets, all based in the Simpson Millar Stand which is located behind one of the goals at The Vic.

We have been made aware that the receipt you receive after buying tickets from Hartlepool incorrectly states that their Ticket Office closes at 4pm on Tuesday - we've confirmed with our hosts that it remains open until kick-off for those who need to collect tickets.

Barrow fans can make a saving by buying their tickets in advance online as, while there will be availability from Pools Ticket Office on the day, prices will increase by £1 on the below on matchday.

We have been made aware that the receipt you receive after buying tickets from Hartlepool incorrectly states that their Ticket Office closes at 4pm on Tuesday - we've confirmed with our hosts that it remains open until kick-off for those who need to collect tickets.

Click here to buy your tickets for the game at Hartlepool United.

Away Travel
The Bluebirds Trust are organising coach travel to the game at Hartlepool - if you're interested please get in touch as soon as possible. 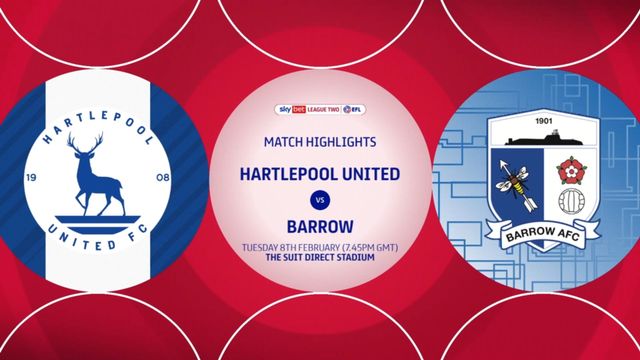 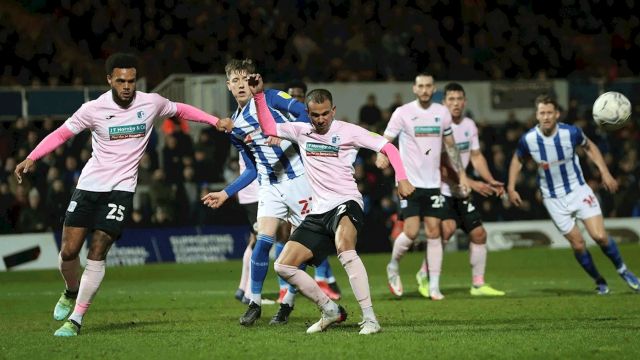