We turn our attentions to the weekend action with a full and in-depth preview of The Bluebirds' League Two visit to Rodney Parade.

In Opposition
Newport County are once again challenging for promotion at the top end of the League Two table on the back of a really encouraging first half to the 2021/22 campaign.

The Exiles come into this weekend’s meeting with Barrow at Rodney Parade on the back of three consecutive league wins which have helped push them in to the division’s top three ahead of kick-off.

Long-serving boss Michael Flynn stepped down from the role at the beginning of October, but County moved quickly to appoint James Rowberry, whose arrival has had a galvanising effect on the club.

Rowberry’s men are moving into a key period of their season which could decide their promotion credentials with six of their next eight league fixtures taking place on home soil.

One To Watch
Courtney Baker-Richardson has developed into a key player for Newport County since putting pen to paper on a deal at Rodney Parade during the summer.

The 26-year-old was a free agent following his release from Barrow where injury ravaged his time as a Bluebird, meaning he was unable to make a single appearance after signing in October 2020.

Baker-Richardson finished last term on loan at Barnet before joining County where he has hit the net eight times in all competitions, including two in his last three games.

Head To Head
The Bluebirds head to Rodney Parade this weekend looking to break a sequence which has seen the home team win this fixture 2-1 on each of the last three occasions it has been played.

Goals from Josh Kay and Josh Gordon helped The Bluebirds come from behind to earn their 2-1 victory at The Dunes Hotel Stadium back in September so County will be out for revenge this weekend.

Referee
Craig Hicks will oversee his first Bluebirds game of the 2021/22 campaign when he’s on the whistle for our trip to face Newport County this weekend.

The official is now into his fifth season on the EFL’s list of referees having been promoted from the National League at the start of 2017/18.

He’s looked after games across Leagues One and Two this term, most recently presiding over Forest Green Rovers’ 3-0 win over Carlisle United at The New Lawn last weekend.

Tickets
Fans can buy their tickets for Saturday’s game by visiting Newport County’s Away Ticket Office prior to kick-off.

Click here for all the information you need on tickets and COVID rules for Saturday’s game.

Live Streaming
We are unable to live stream games on iFollow in the UK on Saturday afternoons, though Bluebirds fans outside of the country can still access live footage as normal on iFollow.

Live Commentary
We continue to provide live online audio commentary from every game this season – both home and away - on iFollow as part of our broadcast partnership with BBC Radio Cumbria.

It’s the only way access online commentary and fans will be able to listen to expert Bluebirds commentator Adam Johnson who will be joined by former Scunthorpe United boss Russ Wilcox this weekend.

Betting
The bookies have installed Newport County as 4/5 favourites for three points, with The Bluebirds rated a 10/3 shot for victory and the draw priced up at 12/5 with our friends at Sky Bet.

Barrow couldn’t quite complete a comeback to take a point at Rodney Parade on Saturday as they were made to pay for a nightmare start during which Newport County scored twice in 13 minutes.

The Exiles were able to open their doors to fans for the first time since before Christmas, but it looked as though the floodgates may open too as Dom Telford helped himself to a quickfire brace for the hosts.

However, Barrow rallied and grew into the game, grabbing a precious goal back just after the hour to provide hope of a fightback but the home side held firm to record their fourth successive win and maintain their place inside League Two’s top three.

Mark Cooper chose to make four changes to his starting line-up as Aaron Amadi-Holloway was handed a debut against his former club after arriving on loan from Burton Albion, while Tom Beadling, Anthony Glennon and Luke James were all restored to the eleven.

However, it was the home side – playing in front of supporters for the first time in more than a month – who got off to the perfect start. Barrow failed to deal with a ball into the box which was flicked on towards the dangerous Dom Telford and he hooked home the opening goal with less than two minutes on the clock.

The goal rocked The Bluebirds, and it was the hosts who continued to look the more dangerous, counter attacking with ruthless precision to make it 2-0 with just 13 minutes gone as this time Telford was afforded the space to move the ball onto his left foot on the edge of the area before rifling an unstoppable shot high past Paul Farman.

County’s top scorer could even have claimed the match ball five minutes later when he received the ball just inside the box and wriggled towards goal but Farman did enough to force him away from goal and the keeper gleefully pounced on the follow-up shot from Finn Azaz.

Barrow finally started showing signs of recovering their composure as the midway point of the first half passed and the lively Remeao Hutton struck the first effort on goal, but his 25-yard drive went wide of the left-hand post.

Anthony Glennon was having some joy down the left flank and got free to deliver a deep cross for the arriving Amadi-Holloway, but the debutant could only nod his effort wide of the upright under pressure from a defender.

Ollie Banks then tried to get things moving when he fed the ball into Luke James on the edge of the box and then claimed the return pass before stabbing a 20-yard effort on goal which took a deflection and dropped wide.

Cooper’s men were enjoying more possession now and came closest of all to pulling a goal back on 38 minutes when Hutton again did well down the right to find an angle to whip an inviting cross into the front post which was met by Amadi-Holloway only for keeper Nick Townsend to make an excellent reaction save.

County almost had a third on 44 minutes when they once again swept forward at pace and the ball was slipped into Telford on the edge of the box but this time he shanked a right-foot shot across goal and well wide.

Banks then sent a testing delivery into the far post from a left-wing free kick in first half stoppage time which went agonisingly beyond everyone in blue and dropped wide.

Barrow made a change at half time with Connor Brown coming on in place of Matt Platt and they came out looking brighter at the start of the second half.

Some good football down the right saw The Bluebirds work a crossing opportunity which was cleared only as far as the arriving Glennon, but his well-struck low shot was blocked.

County were happy to let Barrow dictate possession the opening exchanges of the second period, but they still retained a threat on the break and could have made it 3-0 on 56 minutes when former Bluebird Courtney Baker-Richardson drove clear on goal only for Farman to save well with his feet.

On 63 minutes, Barrow got the lifeline they were hoping for. Glennon flashed a dangerous cross into the box from the left, County didn’t deal with it and keeper Townsend could only palm it out into the legs of defender Jason Demetriou and it ended up ricocheting into the net for 2-1.

The goal brought the hosts out of their shell a little and they began to have more of the ball themselves though there was little in the way of presentable opportunities to score.

An optimistic shout for a penalty as new signing Rob Street went to ground was waved away by the referee, while Farman had to make a decent save to deny Oliver Cooper’s shot from the edge of the box.

There was a great chance for Banks with three minutes remaining when he got on the end of a brilliant delivery from Brough, but the skipper’s header flashed wide of the post.

Just seconds later, Beadling found himself in space 25 yards out and decided to try his luck, but he dragged the effort wide of the post as County were made to hang on a little in the closing stages to secure the three points.

Here are all the ticket details you need if you want to support The Bluebirds during the game against Newport County at Rodney Parade.

Barrow fans will be able to buy tickets for Saturday's League Two game at Newport County from the Away Ticket Office at Rodney Parade ahead of kick-off on the day.

Due to Welsh government rules, all supporters attending the game must be able to produce one of the following upon arrival at the ground:

With regards to disabled supporters, Newport can accommodate four wheelchair users. There are uncovered bays in the Purevans.com South Stand. We have been sent these two pairs of tickets to sell.

Students must produce valid NUS Card and/or proof of education. 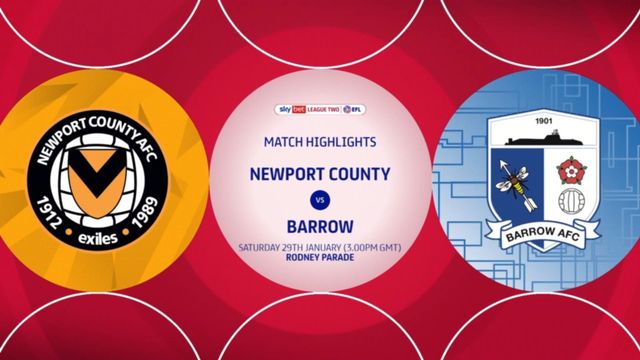 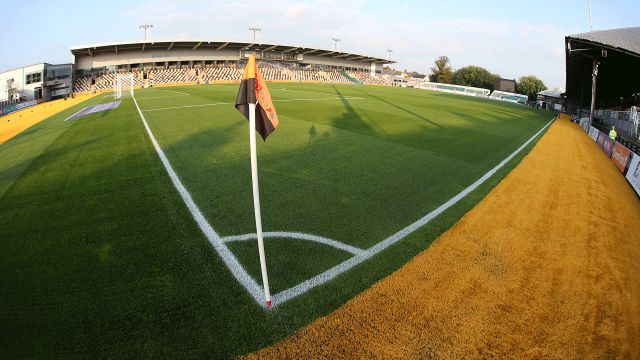