We turn the spotlight on Saturday's game with a full and in-depth preview of The Bluebirds' League Two trip to The Breyer Group Stadium.

In Opposition
Leyton Orient have discovered some improved form in recent weeks to put some distance between themselves and League Two’s relegation zone ahead of the run-in.

New boss Richie Wellens will know there is a little work still to be done to fully confirm their place in the EFL for next term, but back-to-back wins have lifted them 12 points clear of the bottom two.

A run of five consecutive defeats through February saw Kenny Jackett leave his post as boss to be succeeded by Wellens and the new man has made an immediate impact in East London.

The O’s are now unbeaten in six having drawn four in a row before a 3-1 home victory over Rochdale last Saturday and an eye-catching 3-0 triumph at Harrogate Town in midweek.

One To Watch
Young front man Ruel Sotiriou has run in to some great form for Leyton Orient in recent weeks and is a player The Bluebirds will need to keep a close eye on this weekend.

The 21-year-old has hit the net in five of his last six games and his goals have helped The O’s to some improved results as they look to climb away from the danger zone.

Sotiriou came through the ranks with Orient and made his debut whilst still a second-year scholar in 2017 before penning a first professional deal with the club the following year.

Head To Head
Saturday’s game will be just the 15th competitive meeting between the two clubs and Orient have enjoyed the better of it historically having won six times in comparison to Barrow’s three triumphs.

The Bluebirds have only won once at Orient over the years and that was way back in April 1969 when a George McLean double ensured a 2-1 Division Three victory.

Last term, Barrow were beaten 2-0 at The Breyer Group Stadium, while the sides played out a 1-1 draw at The Dunes Hotel Stadium earlier in this campaign when Robbie Gotts scored his first goal for the Club.

Referee
Simon Mather will take charge of his second Barrow game of the season when he’s on the whistle for Saturday’s meeting with Leyton Orient at The Breyer Group Stadium.

The official, who was promoted from the National League at the start of the season, oversaw 3-2 defeat at home to Colchester United in September in which he showed red cards to James Jones and Luke Chambers.

Mather has worked across Leagues One and Two this term with his most recent appointment coming a fortnight ago when he watched Accrington Stanley beat Charlton Athletic 2-1 at The Wham Stadium.

Tickets
Fans can buy their tickets on the day at Leyton Orient’s Ticket Office priced at just £5.

Live Streaming
Due to the international break this weekend, we are allowed to live stream Saturday’s game to supporters in the UK and the rest of the world.

That means you can enjoy full live video coverage of Phil Brown’s first game in charge by joining us on iFollow and picking up your Video Match Pass.

It’s the only way access online commentary and fans will be able to listen to expert Bluebirds commentator Adam Johnson who will be joined by Mick Payne at Orient on Saturday.

Betting
Orient have been installed as 11/10 favourites for three points on Saturday, while Barrow can be backed at odds of 12/5 and there’s a price of 11/5 on the draw with our friends at Sky Bet.

Phil Brown’s first game in charge of The Bluebirds ended in defeat as two second half goals ensured three points for in-form Leyton Orient at The Breyer Group Stadium.

A superb strike from Paul Smyth and another from danger man Ruel Sotiriou did the damage as The O’s enjoyed their third successive victory to ease their own relegation fears.

Brown made two changes for his opening game as Jason Taylor returned to the starting line-up and Remeao Hutton was also drafted back into the side in East London.

The game started slowly but it was The Bluebirds who carved out the first opening of merit when Ollie Banks’ free kick from the right found Josh Gordon, but he sent a header too high.

John Rooney then tried a typically cheeky effort from a free kick wide on the left, whipping it in towards the front post but Orient keeper Lawrence Vigouroux was wise to it and claimed.

The dangerous Ruel Sotiriou then got into shooting space on the edge of the box and his effort deflected kindly into the path of Aaron Drinan, but Paul Farman was out quickly to save.

Sotiriou got in behind the Barrow defence a few minutes later, taking a lovely first touch to settle himself for the shot on the right side of the area before blazing wastefully over the bar.

There was a worrying period for the home side when Barrow forced a series of corners midway through the first half – one of them caused chaos in the Orient area as it pinballed around for a few seconds before finally being cleared.

Barrow were causing problems though; Aaron Amadi-Holloway got on the end of a long ball forward to nod down towards Josh Gordon, but it flashed across his strike partner’s path before he had time to react.

Banks then threaded an incisive ball through to Robbie Gotts, who turned in an instant to find space for a shot, but he didn’t get the cleanest connection and his effort didn’t have the power to trouble Vigouroux.

Sotiriou then took centre-stage with a wonderful free kick from 25 yards which crashed back off the crossbar, before then getting on the end of a ball back into the box only to see his header palmed over by Farman.

An Orient corner from the right was only half cleared to Drinan whose drilled effort was superbly blocked by Amadi-Holloway as it hurtled towards goal.

And the Bluebirds front man had a presentable chance of his own at the other end in first half stoppage time when he got across his man at the front post to meet a right-wing cross only for his glancing header to flash wide of the far post.

The O’s had the last opening of the first period when a dangerous in-swinging cross from the right was met on the volley by Drinan, but it went just wide as Matt Platt did enough to put the Orient man off.

Orient came out looking more determined after the break and found the breakthrough on 52 minutes when Connor Wood played a ball in behind for Paul Smyth to chase. The O’s man got there ahead of Paul Farman on the left of the box and then turned to lift a brilliant shot over the head of the retreating Bluebirds keeper and into the net.

It got worse for Barrow just after the hour when a free kick from the right wasn’t dealt with and Sotiriou was able to turn on to his left foot and drill home Orient’s second from ten yards.

Brown’s men pressed for a route back into the game but came up against a robust Orient backline – Gotts did manage to get a shot off on 72 minutes, but it was fielded comfortably by Vigouroux.

Substitute Josh Kay was then freed in behind on the left by a flighted ball from Banks but, after taking a touch to set himself, his low effort from a tight angle was gathered by Orient’s keeper.

Here are all the ticket details you need if you want to take advantage of Leyton Orient's special offer and support The Bluebirds at The Breyer Group Stadium.

Leyton Orient have slashed ticket prices across the board to just £5 for The Bluebirds’ League Two fixture at The Breyer Group Stadium on Saturday 26th March (3pm kick-off).

Bluebirds fans have already snapped up well over 200 tickets in advance but you can also buy from Orient’s Ticket Office on the day of the game and there will be no increase in price. 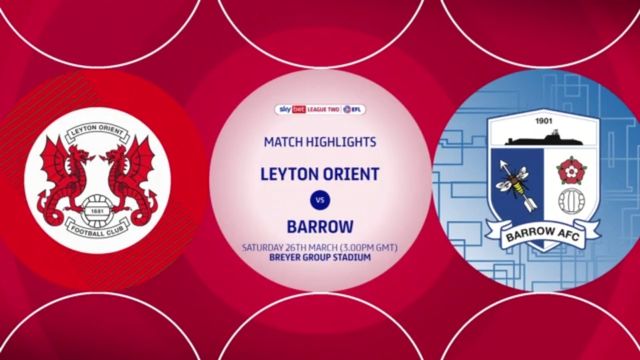 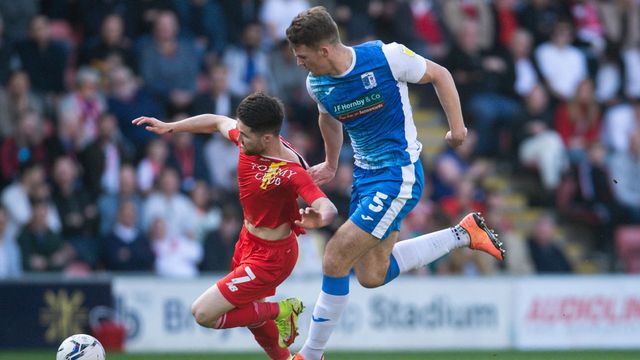