We take an in-depth look at the weekend action as Crawley Town make a League Two visit to The Dunes Hotel Stadium.

In Opposition
After an encouraging start to the new campaign, Crawley Town are going through a tricky run of form having lost their last six games in all competitions.

John Yems’ side had eyes on a play-off berth following an excellent away win at Rochdale at the beginning of last month, but their recent sequence of results has seen them drop to 20th in the League Two table.

Having finished in mid-table last term, fans will hope that they can recover their best form quickly and yet have a say much further up the table this time around.

One To Watch
Crawley have scored three goals in the last six games – and all three of them have come from front man Kwesi Appiah who has made a promising start to life with the club.

Appiah joined The Red Devils in August after returning from a spell playing in the Indian Super League and he’s already hit the net seven times in all competitions.

The 31-year-old’s form saw him shortlisted for the League Two October Player of the Month prize for Barrow will have to ensure they keep him quiet this weekend.

Head To Head
Whilst this weekend will see only the ninth competitive meeting between the two clubs, this is a fixture which has often produced a good amount of goals.

The last meeting – here in Barrow back in March – produced a five-goal thriller which was settled right at the death by Scott Quigley’s close-range finish as The Bluebirds drove towards League Two safety.

Indeed, Crawley have yet to taste victory in Barrow in four previous visits so will be hoping to break that duck on Saturday.

Referee
Samuel Barrott will be on duty at The Dunes Hotel Stadium for the first time this season when he’s on the whistle for our clash with Crawley Town.

The official, now into his second season on the list of EFL referees, last took in a Barrow game when we won 2-0 at Port Vale last term.

Fans will be able to listen to expert Bluebirds commentator Adam Johnson, who will be joined by John Goodwin to describe all the action as it unfolds against Crawley Town.

Betting
Barrow have been installed as 21/20 favourites for three points on Saturday, while visitors Crawley are priced at 12/5 for the victory and a draw is rated a 23/10 shot with our friends at Sky Bet.

The Bluebirds fell to a disappointing home defeat as James Tilley’s second half drive was enough to hand Crawley Town all three points from Saturday’s encounter at The Dunes Hotel Stadium.

Visiting Crawley arrived on the back of a sequence of six defeats in a row but they made things difficult for Barrow from the off and took their best chance of the afternoon to secure a confidence-boosting victory.

Mark Cooper made three changes from the side which drew at Carlisle United last week; Luke James was given the nod in place of the suspended Josh Gordon, Remeao Hutton came back into the team and Mike Jones made his first league start in almost a year.

Barrow came out of the traps quickly and showed a keenness to push their visitors on to the back foot in the closing stages and they were moving the ball quickly to try and cause problems.

They could have stolen in front on seven minutes when Joe Grayson’s deep corner from the right almost curled in at the far post only for Town keeper Glenn Morris to back pedal quickly to claw it away.

Offrande Zanzala was left wondering how he hadn’t opened the scoring from the resultant corner as the ball flashed across the front man’s path on the edge of the six-yard area, but he couldn’t quite apply the finishing touch.

Crawley felt their way into the game and had their first shot in anger when Barrow made a meal of clearing a right-wing corner before Jake Hessenthaler’s low drive was blocked away from danger.

That opportunity seemed to give John Yems’ men extra belief and top scorer Kwesi Appiah came close midway through the half when the ball fell kindly for him 20 yards out, but his shot flew wide of the post.

The Bluebirds pushed forward again, and a half-cleared corner fell to Grayson 25 yards out who struck his effort on goal well, but it flashed across and wide of the post.

In the final minute of the half a low ball across the edge of the Town penalty area rolled right into the path of the arriving Remeao Hutton but he went for power and his first-time drive flew well over the bar.

Mark Cooper’s men came out positively at the start of the second half and Luke James fizzed a low cross into the box from the left within a minute of kick-off but the defence just about dealt with it.

Zanzala then showed some great determination to shield possession on the edge of the Town box before nudging the ball into the path of Patrick Brough whose low shot was comfortably held by Morris.

At the other end, Town showed their teeth from a long-range free kick taken by James Tilley which wasn’t too far wide of Paul Farman’s right-hand post.

Grayson then whipped a left-wing free kick into the visitors’ penalty area, which was met by James Jones near the penalty spot, but his goalbound header struck a Town defender and was smuggled clear.

On 56 minutes, Town took the lead. They swept forward quickly down the left side and worked the ball into the path of Tilley who struck an unerring drive beyond the despairing dive of Farman and into the far corner of the net for 1-0.

Barrow toiled to get back into the game and Cooper made a double substitution as Tom White and Josh Kay were introduced, the latter getting on to a deep free kick but not really troubling Morris with his low shot.

Robbie Gotts then tried to take matters into his own hands when he found space 30 yards from goal and decided to whip an effort on goal which dropped just wide of the target.

With two minutes left, a ball into the area was headed awkwardly up in the air by a visiting defender which gave Grayson a sniff of a chance, but he couldn’t quite prod past Morris who gratefully grabbed the loose ball.

The Bluebirds are back on home soil again on Saturday as Crawley Town are the visitors to The Dunes Hotel Stadium – and tickets are now on sale for the League Two encounter (3pm kick-off).

After taking over 1,600 on the road to Carlisle United over the weekend, we’d love to welcome a bumper crowd to get behind Mark Cooper’s men on our own patch on Saturday.

Tickets are on sale right now online and in-store and fans can make a saving by buying in advance for the fixture against The Red Devils this weekend. 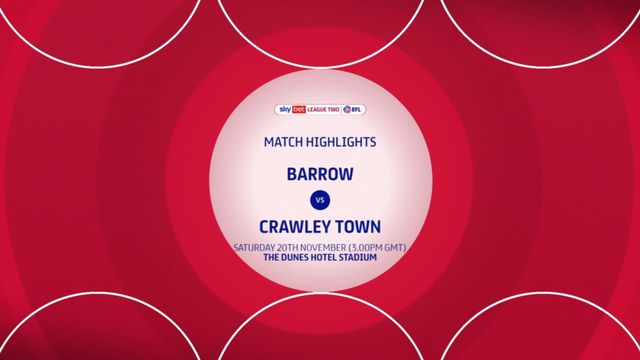 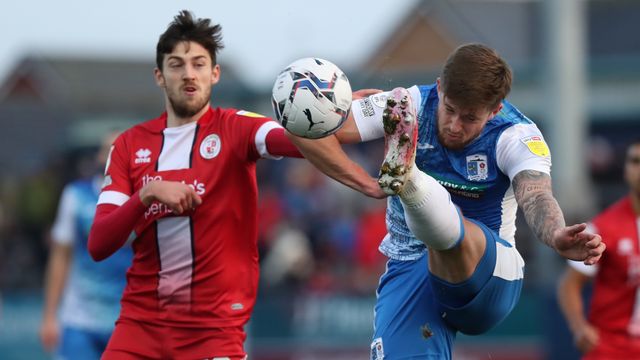