We turn our attentions to the midweek action with a full and in-depth preview of The Bluebirds' trip to The New Lawn.

In Opposition
In-form Forest Green Rovers lead the way in League Two, sitting top of the table ahead of Barrow’s visit to The New Lawn on Tuesday evening.

Rob Edwards was selected to be their new boss during the summer and it’s proving to be a shrewd decision, with the former Wolves and Blackpool defender doing an impressive job so far.

Rovers have not lost in the league since Swindon Town’s 2-0 success at The New Lawn in early October and moved two points clear at the summit following Saturday’s 3-1 triumph at Hartlepool United.

They have hit the net 30 times in 16 outings so far this season and have combined that with a mean defence which has leaked just 14 goals – a record only bettered across the division by Tranmere Rovers.

One To Watch
Matty Stevens has enjoyed a fantastic start to the new campaign and has already hit the net 12 times in all competitions for Forest Green Rovers in 2021/22.

The front man is in the form of his career and has scored in each of his last three games to put The Bluebirds on red alert ahead of their trip to The New Lawn.

Stevens arrived at Rovers in the summer of 2019 when the club paid an undisclosed fee to Peterborough United and the 23-year-old is really starting to deliver for the Gloucestershire outfit.

Head To Head
The last meeting between the two sides was a particularly memorable one for Barrow fans as a brilliant 2-0 win at The New Lawn rubberstamped League Two safety last season.

The Bluebirds were a little unlucky not to defeat Rovers in the home fixture last term, having to be content with a 2-2 draw which saw the visitors snatch a last-minute equaliser in Cumbria.

Tuesday’s game will be the 19th competitive meeting overall and both sides have won five times, with the fixture ending in a draw on no fewer than eight occasions over the years.

Referee
Christopher Sarginson will be in charge of his second Barrow game of the season tonight when he’s on the whistle for our League Two visit to Forest Green Rovers.

The experienced official was also in the middle when we made the trip to Accrington Stanley in the Papa John’s Trophy back at the end of August.

Sarginson’s most recent appointment was in the FA Cup last Tuesday when he saw Plymouth Argyle defeat Sheffield Wednesday 3-0 in their First Round replay at Home Park.

Tickets
Tickets for this evening’s game are available from the Forest Green Ticket Office prior to kick-off.

Live Streaming
Due to it being a midweek game, we’re able to live stream this evening’s fixture on iFollow for fans in the UK and abroad.

Video Match Passes are on sale now priced at just £10 so make sure you snap yours up to access all the action as it unfolds from The New Lawn.

Fans will be able to listen to expert Bluebirds commentator Adam Johnson, who will once again be behind the mic to describe every kick at The New Lawn on Tuesday night.

Betting
Forest Green have been installed as 4/5 favourites for victory over The Bluebirds, with Mark Cooper’s men rated 3/1 to collect three points and a draw priced up at 13/5.

Here are all the ticket details you need if you would like to support The Bluebirds on the road at Forest Green Rovers.

Barrow fans will be located in three sections of the West Terrace at The New Lawn, with our allocation split into covered seating, covered standing and uncovered standing.

Supporters are advised to wear appropriate clothing if choosing uncovered standing as this area of the stadium is exposed.

If you require a wheelchair space these are charged at the appropriate category (plus free carer) and must be booked direct with Forest Green Rovers by calling 0333 123 1889 (9am-3pm, Monday, Tuesday, Thursday, Friday). Wheelchair tickets are located in Rovers’ main East Stand. 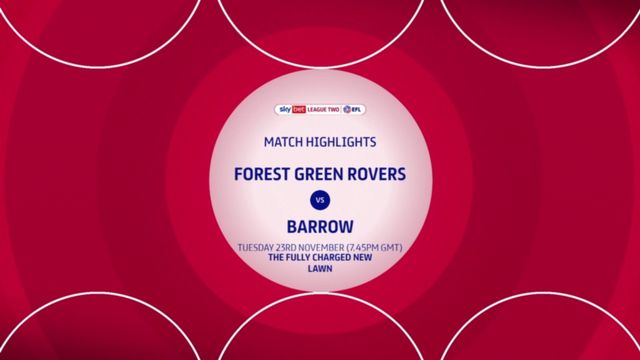