We turn our attentions to the weekend with a full and in-depth preview of The Bluebirds' League Two trip to The Banks's Stadium.

In Opposition
New Walsall boss Matt Taylor was given the green light to overhaul the squad at The Banks’s Stadium during the summer after being appointed to the role at the end of May.

Taylor was able to bring in 13 new players and, after a slow start to the new campaign, those recruits are showing signs of settling in and helping The Saddlers climb the League Two table.

Three consecutive losses to kick-off 2021/22 was not ideal, but Taylor’s men rallied towards the end of the opening month and have showed more encouraging signs in recent weeks.

After a dramatic home win over Salford City, Walsall picked up a creditable point on the road at Leyton Orient before claiming a confidence-boosting win at Oldham Athletic in midweek.

One To Watch
George Miller has proved a big hit at The Bank’s Stadium since arriving at the club on a season-long loan from Barnsley at the end of August.

The 23-year-old scored twice on his home debut in the win over Mansfield Town and also struck a brace at Matt Taylor’s men came home from Exeter City with a point from a 2-2 draw.

Miller was among the scorers again on Tuesday night as Walsall won at Oldham Athletic so The Bluebirds’ defence will have to keep a close eye on the former Middlesbrough man on Saturday.

Head To Head
Saturday’s game will be the 35th competitive encounter between the two clubs in a rivalry which stretches back to the 1921/22 Division Three North days.

The Saddlers have had the better of it historically having tasted victory 14 times in comparison to Barrow’s 11, but The Bluebirds won on their last trip to The Banks’s Stadium last term thanks to Josh Kay’s late goal.

Referee
Andy Haines will oversee The Bluebirds for the first time this season when he’s the man in the middle for our League Two trip to Walsall.

The experienced official has been refereeing in the EFL since 2007/08 and last took charge of Barrow during the 2-0 home defeat to Port Vale back in April.

Haines has operated mainly across League One and League Two so far this term, with his most recent appointment being at Bradford City for their 2-2 draw with Bristol Rovers last weekend.

Tickets
Bluebirds fans can save money by buying their tickets in advance – simply call The Saddlers’ Ticket Office before 4.30pm on Friday on 01922 651 416.

Tickets will also be available on the day but at a slightly more expensive rate.

Fans will be able to listen to expert Bluebirds commentator Adam Johnson, who will be joined by former Barrow boss Lee Turnbull to describe all the action as it unfolds at The Banks’s Stadium.

Betting
Walsall have been installed as 6/4 favourites for three points on Saturday, with The Bluebirds rated a 9/5 shot to win the game and a draw priced up at 21/10 by our friends at Sky Bet.

Josh Gordon returned to haunt his former club by scoring a sensational equaliser deep into stoppage time to secure Barrow a share of the points from a dramatic encounter at Walsall.

The forward gleefully forced the ball home right at the death to earn Mark Cooper’s men a 2-2 draw in what had been a hard-fought affair against The Saddlers who twice led only to let it slip.

It was a ferocious start from the home side and the first effort came after just three minutes when Conor Wilkinson drove into space to let fly with a shot which was well tipped over by Paul Farman.

However, from the resultant corner, Walsall led. The ball was delivered into the edge of the six-yard area and a first shot was saved by Farman before it ricocheted down in front of top scorer, George Miller and he rifled in the opening goal from close range.

The goal injected real confidence into the hosts, and they could have been further ahead with just 8 minutes on the block when Miller timed his run brilliantly to get in behind the Barrow defence and cut inside to shoot only for Farman to make a wonderful save.

Wilkinson then tested Farman once more direct from a free-kick before Kieran Phillips showed great skill to drive in from the left wing to curl a shot just wide of the target.

The home side were being roared on by an encouraged crowd but they were finding Farman in inspired form – he produced more good work on 18 minutes to paw clear a Jack Earing free kick.

Emmanue Osadebe turned swiftly on the halfway line to run at the Barrow defence before curling a powerful shot just wide, while Joe Grayson had to take a yellow card to stop Miller skipping through on goal as Walsall kept pressing.

However, as time wore on, Barrow began to gather their composure and they were on level terms nine minutes before the break. Josh Kay fizzed a beautiful pass out to Remeao Hutton on the right who then delivered a first-time cross into the area where George Williams arrived right on cue to slide home his first goal for the Club.

Farman was kept busy again by Osadebe as he once again turned to bore down on goal, while Walsall keeper Carl Rushworth had to stay alert to tip over a Williams’ free kick from the left which almost caught him out.

The second half began with plenty of effort from both sides but very little in terms of quality in the final third until just after the hour mark when Walsall went back in front. A neat move down the right saw a low ball fed across to Miller at the near post who finished clinically, despite Bluebirds’ protests that the ball had gone out before it was crossed.

Barrow attempted to recover and could have levelled fifteen minutes from time when Hutton fizzed another testing ball into the middle and Kay arrived to try and strike on goal, but he didn’t connect cleanly, and Walsall survived.

At the other end, Miller had a sniff of completing his hat-trick when he got on the end of a deep cross from the right, but he nodded an effort too high to trouble Farman.

The Bluebirds remained patient and continued to knock it around, probing for an opening. It almost arrived six minutes from time when Kay picked out Banks on the edge of the box, but his low strike was just about held by keeper Rushworth with Hutton loitering for the rebound.

The moment finally arrived into the sixth minute of stoppage time when Barrow worked the ball down the left and Brough whipped another terrific cross into the box where Gordon tucked it home to set off wild celebrations behind the goal.

Here are all the details you need if you want to travel to The Banks's Stadium to cheer The Bluebirds on against Walsall.

Tickets for Saturday's game against Walsall at The Banks's Stadium are now no longer available over the telephone but Barrow fans will be able to buy them on the day.

The Saddlers have confirmed that tickets will be on sale to Bluebirds supporters direct at the away turnstiles but have advised that these are available via CARD PAYMENT ONLY.

Disabled supporters are charged at the relevant price according to their age and will be entitled to bring a carer with them free of charge.

There is an Away Fans Bar inside the stadium which will open from 1.30pm but fans are advised that The Banks’s Stadium is completely cashless.

Parking
Car parking is available to away supporters at the following rates:

Away Travel
The Bluebirds Trust are organising coach travel to the game at Walsall and are taking bookings now.

Hospitality
Walsall have hospitality packages available for visiting fans and if you are interested in making a booking then you can contact Alex Smith on alex.smith@walsallfc.co.uk 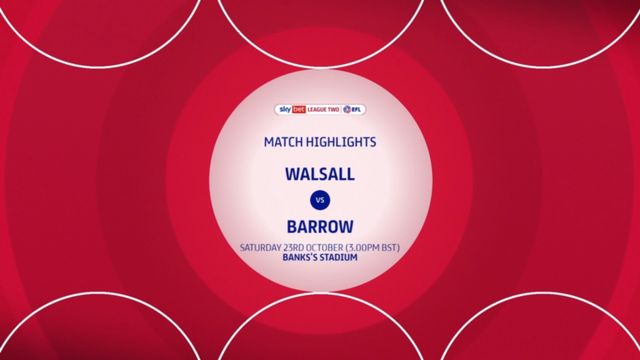 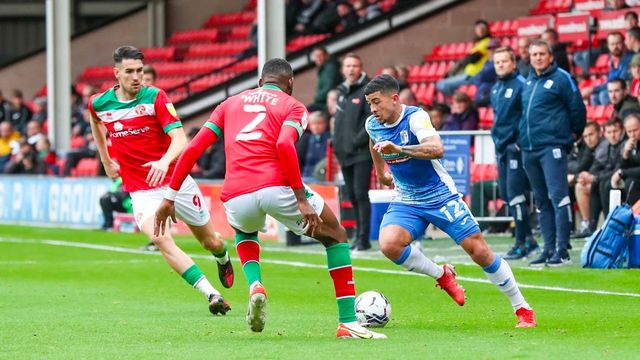