Take a look at everything you need to know ahead of this evening's game in our full and in-depth preview of the action at The Dunes Hotel Stadium.

In Opposition
Newport County will arrive in Cumbria this evening hoping to build on an encouraging 2-1 triumph over Walsall at the weekend.

Michael Flynn’s men slipped to a disappointing defeat to Northampton Town last Tuesday which prompted eight changes for the clash with The Saddlers.

The rotation had the desired effect and the three points moved them into double figures and another positive result this evening will push them into the play-off positions overnight.

After being beaten by Morecambe in last season’s Play-Off Final, County will be aiming to push themselves back into the promotion picture again during 2021/22.

One To Watch
Cameron Norman has been an ever-present for Newport County since making a switch to Rodney Parade from Walsall on a two-year deal during the summer.

A defender by trade, Norman came through the ranks with Norwich City and was a key figure in The Canaries’ Under-18s at they won the FA Youth Cup in 2013.

After a spell in non-league, the versatile star won a move back into the EFL with Oxford in 2018 and then moved on to Walsall for an undisclosed fee where he became a regular.

Head To Head
Barrow will be going in search of a second consecutive home win over The Exiles this evening following last term’s 2-1 success in Cumbria.

Tonight’s game will be the 23rd competitive meeting between the two clubs in a rivalry which has spread across the National League and the Football League.

Referee
Robert Madley will be on the whistle at The Dunes Hotel Stadium for the first time this season when he takes charge of our meeting with Newport County.

The experienced official was with us last season for the 2-2 draw against Walsall in October and has operated right across the EFL and Premier League.

He has overseen eight fixtures so far in 2021/22, the most recent being Walsall’s 1-0 win over Brighton Under-21s in the Papa John’s Trophy ten days ago.

Fans will be able to listen to expert Bluebirds commentator Adam Johnson, who will be joined by John Goodwin for full coverage of tonight’s game against The Exiles.

Betting
The Bluebirds have been installed as 11/8 favourites for three points tonight, with visitors Newport rated a 2/1 shot for victory and the draw priced up at 21/10 with our friends at Sky Bet.

Josh Gordon scored a spectacular winning goal as Barrow came from behind to claim three points from their Friday night encounter with Newport County at The Dunes Hotel Stadium.

The striker’s sumptuous curling effort was worthy of winning many a game and it helped Mark Cooper’s men turn things around after Josh Kay had cancelled out Finn Azaz’s opened for Newport.

The visitors made a ferocious start and got on the front foot from the first whistle, forcing a couple of early corners and almost taking the lead when Alex Fisher’s header flashed just wide of the front post.

Barrow struggled to get a foothold but had appeals for a penalty turned down on six minutes when Ollie Banks stepped out of defence to send a raking pass towards Patrick Brough at the far post. His header back across was blocked by a County defender and there was a suspicion of handball but referee Robert Madley was adamant in his denial.

On nine minutes, Jordan Stevens let fly from long-range after the ball had fallen kindly into his path, but his crisply struck effort was held by County keeper Nick Townsend.

A minute later, the visitors were ahead. The South Wales outfit nicked possession on the halfway line and sprung forward down the left where the ball was played into the path of Finn Azaz who rifled home a low drive to give Newport the lead with his first goal for the Club.

For a while afterwards Barrow struggled to regain their composure and it was Newport, buoyed by a dramatic late win over Walsall last time out, who enjoyed the more productive possession.

Mark Cooper’s men slowly worked their way back into the encounter and Brough had the next effort on goal when he arrived on to a loose ball on the edge of the area, but his firm drive was bravely blocked by a sprawling defender.

The Bluebirds worked a neat corner routine which saw Joe Grayson fizz a low ball into the feet of Stevens at the front post, but the former Leeds man drove his first-time effort too high, and County were off the hook.

The game was swinging one way then the other as the half-hour approached. Robbie Willmott tried a long-range drive for the visitors which Farman held, while Josh Gordon came close for Barrow when he got on to Offrande Zanzala’s precise pass only to flash an effort across goal and wide.

The industrious Gotts continue to look a menace to County and he found space to turn with his back to goal on the edge of the box and threaded a pass into the feet of Josh Kay but his low shot was saved by Townsend.

Both sides had chances right at the end of the half when former Barrow man Courtney Baker-Richardson met a right-wing corner well to draw a smart save from Farman, before Gotts produced a powerful effort at the other end which Townsend did well to claw away.

County could have extended their lead at the start of the first half when Baker-Richardson got in behind the Barrow defence, but Farman came off his line smartly to block the front man’s shot.

The Bluebirds responded well though and built some pressure on their visitors, almost drawing level when a corner was worked into the feet of Kay and his powerful low drive through bodies was brilliantly turned round the post by Townsend.

The pressure told just after the hour when a lovely move on the right saw Stevens drive into the box and then intelligently cut the ball back into the path of Kay and his unstoppable drive found the corner to bring Barrow level.

It could have got better for Cooper’s men minutes later when dangerman Stevens threaded a lovely ball into the feet of Gordon who turned smartly to fire a low shot on goal which was excellently saved by Townsend.

Dimitri Sea – on for Zanzala – then turned away from his defender skillfully on the left of the area to provide a low ball into the middle but Gordon just couldn’t get enough on it to test Townsend.

George Williams was introduced from the bench and was straight into the action with a shot from the edge of the box, which was deflected wide, before Stevens also struck a shot just off target from the resultant corner.

With 12 minutes left, Gordon produced a moment of magic. The front man drifted into space twenty yards from goal on the left of the box before cutting inside on to his right foot and curling an astonishing shot right into the far top corner of the net to make it 2-1 to Barrow.

Williams tried his best to steal the headlines with a spectacular strike of his own from a free kick, but his swerving effort just didn’t dip enough to sneak under Townsend’s crossbar.

Here are all the details you need if you want to come along to The Dunes Hotel Stadium for Friday's Sky Bet League Two game against Newport County (7.45pm kick-off)

Tickets for Friday’s fixture with Newport County are on sale now online and you can make a small saving by buying in advance.

Home and away fans will also be able to buy tickets on the day of the game from 2pm in Main Reception (card payment only) and from 6pm in the Fan Zone Ticket Booth (cash and card payment), but these will be at the slightly higher price.

There will be no tickets sold on the turnstiles. 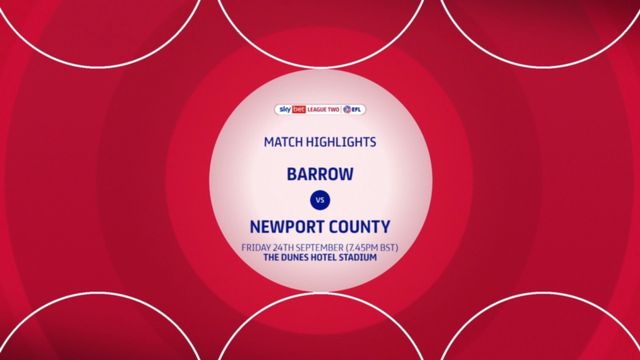 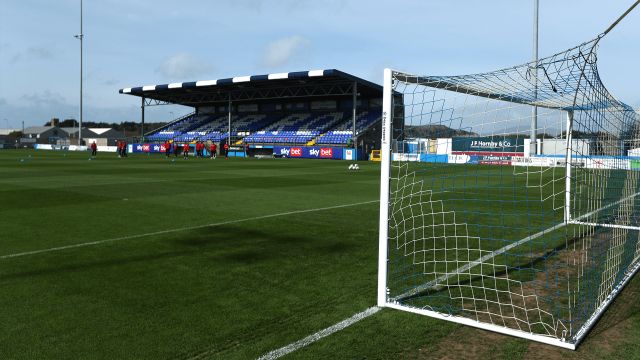