Take a look at everything you need to know ahead of Saturday's League Two opening day against Stockport County at Edgeley Park.

In Opposition
Stockport County were champions of the Vanarama National League last term, as they secured a 2-0 victory over Pete Wild’s FC Halifax Town on the final day to end their decade-long exile from the Football League.

Former AFC Fylde and Hartlepool United boss, Dave Challinor is at helm at Edgeley Park, and after joining the club in November of last year, he oversaw a return to form and led County to the top of the National League table.

Despite a little wobble towards the end of the campaign, Challinor’s Stockport remained strong and got the job done on that final day with a victory over a FC Halifax side that included Barrow new boys Tyrell Warren & Billy Waters.

Kyle Wootton joined Stockport this summer on a free transfer from Notts County, and has penned a three year deal with The Hatters.

Challinor has also brought in a former Barrow player in the form of Akil Wright. The 26 year old joins the Cheshire side, following a two year spell at York City.

Head To Head
The Hatters have been a familiar face for The Bluebirds over the past decade, with both Barrow and Stockport being relegated to the Skrill North together from the Conference in 2013.

The last meeting between the sides came in the National League on 13th August 2019, when County were 3-2 winners in a very close encounter. Goals from Scott Quigley, John Rooney and a late barrage from Ian Evatt’s side wasn’t enough to grab a point.

The last time the two clubs met in the Football League was on 28th January 1972, when Barrow ran out as 3-2 victors at Holker Street.

The Bluebirds did the double over County that season, with The Hatters actually finishing beneath Jack Crompton's Barrow in the Fourth Division standings. However, we all know the history by now, and it was Barrow who failed re-election.

Referee
Ollie Yates will be the man with the whistle at Edgeley Park on Saturday.

He last officiated Barrow in the 2-0 win over Swindon Town at Holker Street last December, and also oversaw Barrow’s first game back as a Football League club when The Bluebirds faced Derby County at Pride Park in September 2020.

Fans will be able to listen to captivating commentator Adam Johnson, who will be joined at Edgeley Park by longtime Barrow supporter John Goodwin, to describe all the action as it unfolds.

Betting
Stockport County have been installed as 8/15 favourites to get the victory this weekend, though Barrow look to be good value at odds of 19/4 and a draw is priced up at 29/10 with our friends at Sky Bet.

Barrow secured their first opening day away win since 2009, with a 3-2 victory over EFL returnees Stockport County at Edgeley Park.

Barrow were on the attack straight from kick-off, as Tyrell Warren looked to get the season off to a great start with an early goal, but Ben Hinchliffe managed to hold onto the left back's shot.

The constant early threat reaped its own rewards after 6 minutes, when Josh Gordon ran at the Stockport back line and drove a shot into the bottom right corner from 25 yards to open the scoring for Barrow.

The sell out home crowd were silenced when former Stockport man Ben Whitfield cut in on the left and fired a shot past Hinchliffe to double Barrow’s advantage.

Josh Gordon came close to doubling his tally for the afternoon when his header from Billy Waters’ cross found the side netting.

2-0 turned to 3-0 just 10 minutes later, when Waters himself curled home an effort to send the 991 travelling Barrow fans into jubilation.

Pete Wild’s side went into the break 3-0 up, but Stockport were fast out of the traps to start the second half, and it was Antoni Saracenic that got himself on the scoresheet, as his scuffed effort found its way past an off-balance Paul Farman on 49 minutes.

It was the home side that looked the more likely to add another, when Fraser Horsfall’s effort grazed over the bar in the 63rd minute.

County did eventually add to their tally, when Paddy Madden met an in-swinging cross with his head, pumping the Cheadle End back into life and cutting Barrow’s lead down to just a single goal.

Barrow looked to try and restore their two goal advantage straight away, when Billy Waters forced a low save from the Stockport goalkeeper at the near post; his powerful effort palmed out for a corner.

Stockport kept coming at Barrow. Paul Farman made a spectacular save in the 83rd minute to deny Horsfall from levelling the scoreline, and debutant Tyrell Warren pulled off a fantastic last-ditch tackle to steal the ball from the feet of Paddy Madden in the box.

There was drama in the last stages of added time, when referee Ollie Yates pointed to the spot, but after a consultation with his linesman, he awarded a free kick to Barrow instead.

Barrow saw out the final stages and sealed a first victory away from home on the opening day since Cambridge United in 2009.

Here are all the ticketing details for our opening day League Two fixture at Edgeley Park on Saturday 30th July.

Stockport County are selling the tickets direct from their away supporters ticketing website, and pricing for Barrow fans is as follows:

The Edgeley Park outfit have allocated 1200 tickets for Bluebirds supporters for what should prove to be an exciting occasion, as Stockport return to the EFL for the first time in a decade and Pete Wild takes charge for his first league game in charge of Barrow.

It may be the case that not all supporters are comfortable with using the online ticketing platform, so, for further information please call the Stockport County Ticket Hotline on 0161 266 2700 or email tickets@stockportcounty.com. 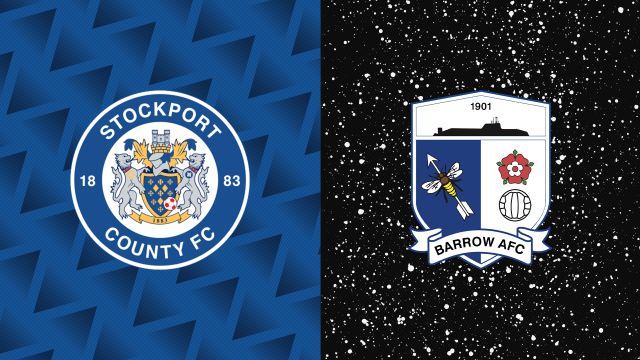 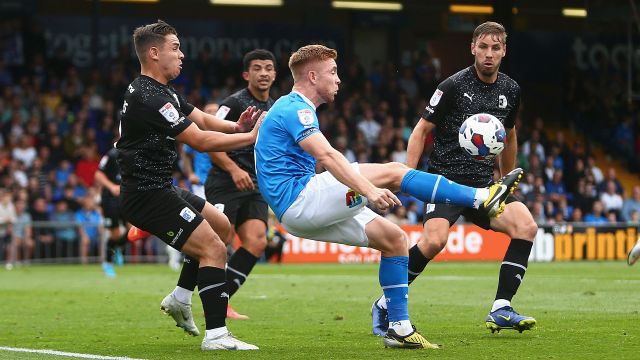