We take a journey back to the 1960s to remember a brilliant Lancashire Cup meeting with our next opponents, Blackpool.

Whilst you have to go back to the 1920s for a competitive meeting, the competition that we have played Blackpool in over the years most frequently is the Lancashire Senior Cup.

And, ahead of Tuesday night’s clash in the EFL Trophy, Phil Yelland has been casting his eye over one of those previous Holker Street encounters involving a famous Barrovian – Emlyn Hughes…

The team took a break from league business to play Blackpool in the semi-finals of the Lancashire Senior Cup. The visitors were in Division One (now the Premier League) and were destined to finish the season in 13th place behind Liverpool. They were managed by Barrovian Ron Suart who had become their manager in 1958 having spent three years at Bloomfield Road as a player immediately after World War Two.

The visitors did not include their two squad members who were bound to be part of the World Cup squad with England months later – Jimmy Armfield and Alan Ball - but they still fielded a good side.

In goal was Alan Taylor, who never made the number one jersey his own whilst with the club but he went on to have a good League career at Southport. A young Emlyn Hughes was included in the left side of the defence – he was starting to make a name for himself with Blackpool having made his First Team debut two years earlier. John Craven was in midfield – he was starting out on a career which would see him make more than 150 league appearances for the club before spells with Crystal Palace, Coventry City, Plymouth Argyle, Vancouver Whitecaps and California Surf, whilst Ian Moir had joined the club from Manchester United a year earlier and went on to play for a number of other League clubs, most notably Wrexham.

Barrow had beaten Liverpool 3-2 at Holker Street the previous October thanks to goals from Brian Pilkington, “Spike” Rawlingson and Jimmy Mallon, and Bury 2-0 at Gigg Lane with goals from Alex Alston and Mick Hartland to reach this stage. As a result, Don McEvoy’s side were keen to make the Final.

Three days earlier the team had drawn 1-1 at home to Tranmere Rovers in Division Four as the season drifted towards a conclusion with a mid-table place inevitable and Manager McEvoy made one change to the starting line-up with George Smith returning in place of Keith Eddy. 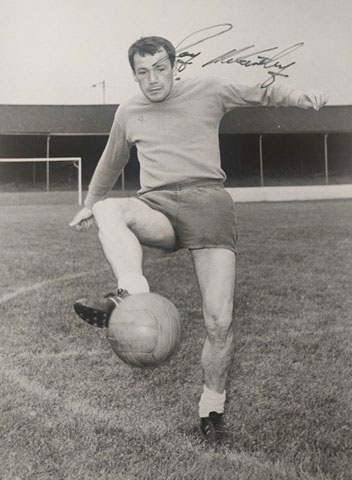 It looks to have been a good contest which, much to the delight of the home fans, Barrow won 3-2 thanks to two goals from Jim Mulholland – one a penalty - and the other goal from Roy McCarthy. Both men were to be important members of the side that won promotion twelve months later. Mulholland finished that season as top scorer with 18 goals in all competitions ahead of Bobbie Tait. The Blackpool goals came from Ronnie Brown and a Brian Arrowsmith own goal.

Sadly, in the Final the following month against another First Division side Burnley, who had finished third in Division One, Barrow lost 4-0 as The Clarets proved too strong.