The voting is continuing for our Barrow Wall of Fame – and fans have got until 7pm on Wednesday night to have their say on the Bluebirds star who should top the bill in the 1991-2010 period.

We’ve shortlisted six Barrow legends for you to choose from and to help you make your choice, let’s take a look at the heroic half-dozen in more detail…

John Brady
Nicknamed ‘Jabba’, John Brady was a bit of a goal machine during his two-and-a-half seasons at Holker Street. His incredible tally of 58 goals in only 108 appearances shows that he certainly knew where the net was – a busy, nippy little striker who never gave opposition defences a minute’s peace.

He arrived at the Club in the latter stages of the 1991/92 campaign and, remarkably, ended the season as top scorer with 11 goals to his credit – despite missing that penalty in the ninth minute of injury-time against Yeovil in the last home game of the season!

Even with Brady’s exploits, Barrow suffered the heartache of relegation but he went on to help himself to another 22 league goals in his first full season and then notched 20 more in 1993/94, which was to be his final campaign with the Club. 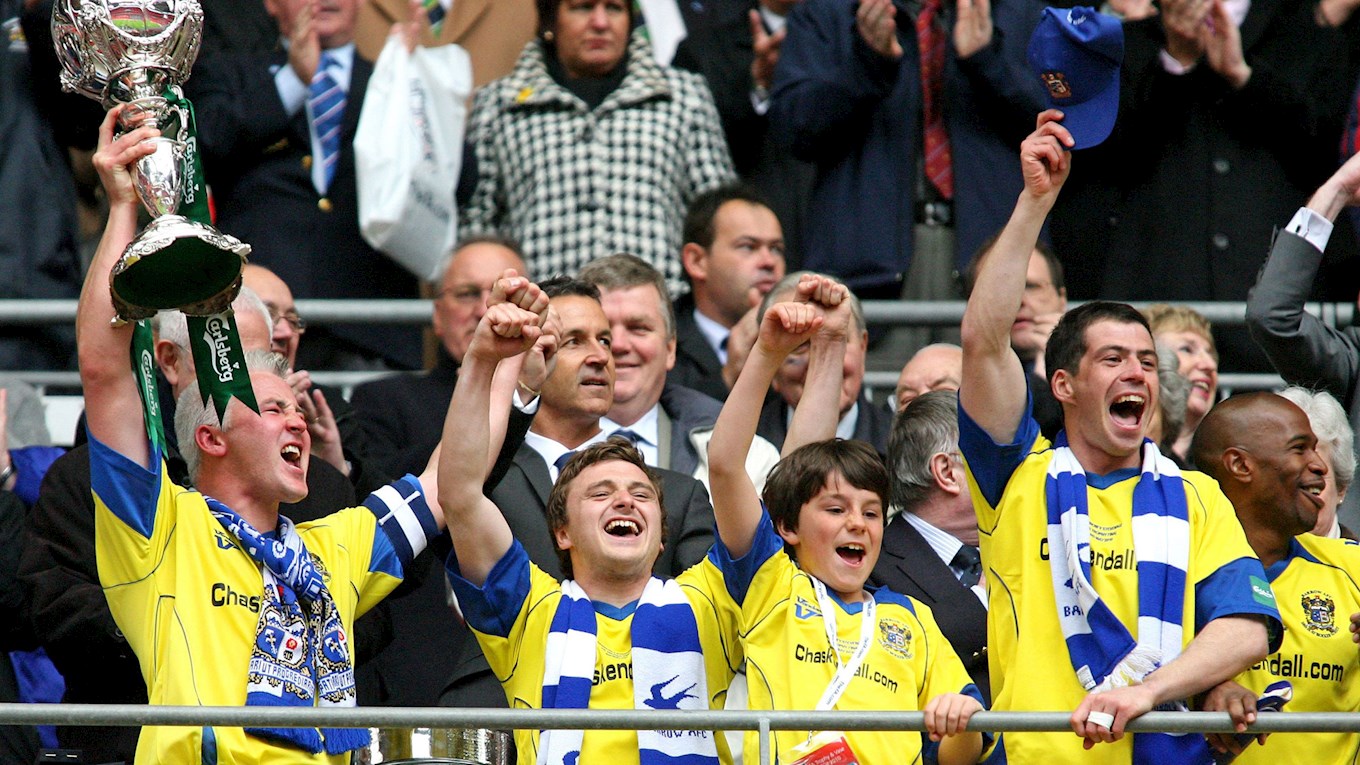 Paul Jones
The reliable defender had two spells on the books at Barrow, firstly between 1997 and 1999, before returning to the club for a further stint between 2006 and 2011, making almost 300 appearances in total.

There were moments of pleasure and moments of pain during Jones’ time as a Bluebird, as he formed part of the mean defence which captured the NPL title in 1998 before remaining loyal when things turned sour the following season.

Jones was one of the rocks on which promotion was built in 2008 and, when he lost his place in the side 18 months later, he showed typical tenacity and determination to win back his shirt before skippering the team to FA Trophy glory in May 2010. A genuine Club legend. 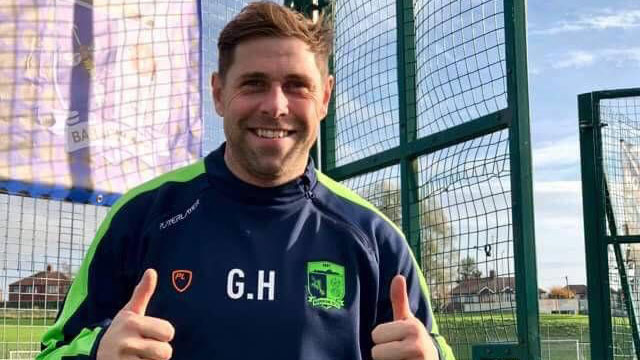 Grant Holt
It was during the early stages of his career that Grant Holt first pulled on a Barrow shirt before returning to feature again during the tail end of his playing days.

It’s the former days that Bluebirds fans will remember most fondly, when he starred during loan spells in 2000 and 2001 before agreeing a permanent deal in the summer of 2001.

He went on to spend two full seasons with the Club, blasting home 37 goals in the process – the 2001/02 campaign was a particular highlight, as it became crystal clear that the front man was destined for the top.

Holt left Holker Street in 2003 and went on to embark on a footballing journey which would take him right to the Premier League and to the very brink of an England call-up. 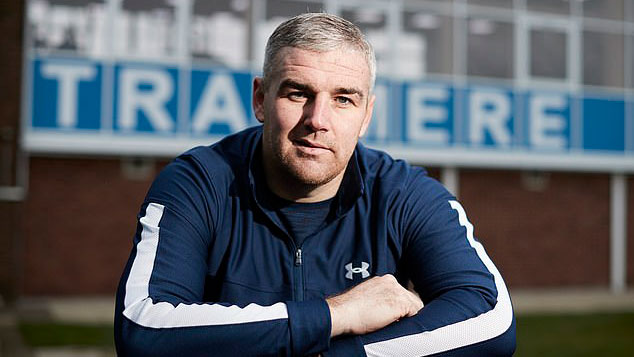 Steve McNulty
First impressions of Steve McNulty would have suggested brawn and brutality – but that was hardlyh the full story when it came to the popular centre-back.

Of course, he was as tough as they come, but the defender possessed an astute footballing brain and ability to read the gal and play with a measured control was as useful as his desire to get stuck in.

McNulty spent two seasons at Holker Street, between 2007 and 2009, making 78 appearances and weighing in with 12 goals along the day.

Alongside Paul Jones, he formed a feared central defensive partnership which helped the Club go from fearing relegation at Christmas 2007 to embarking on a run which ended with the Bluebirds finishing the season in the play-offs. No wonder he scooped Player of the Year that season. 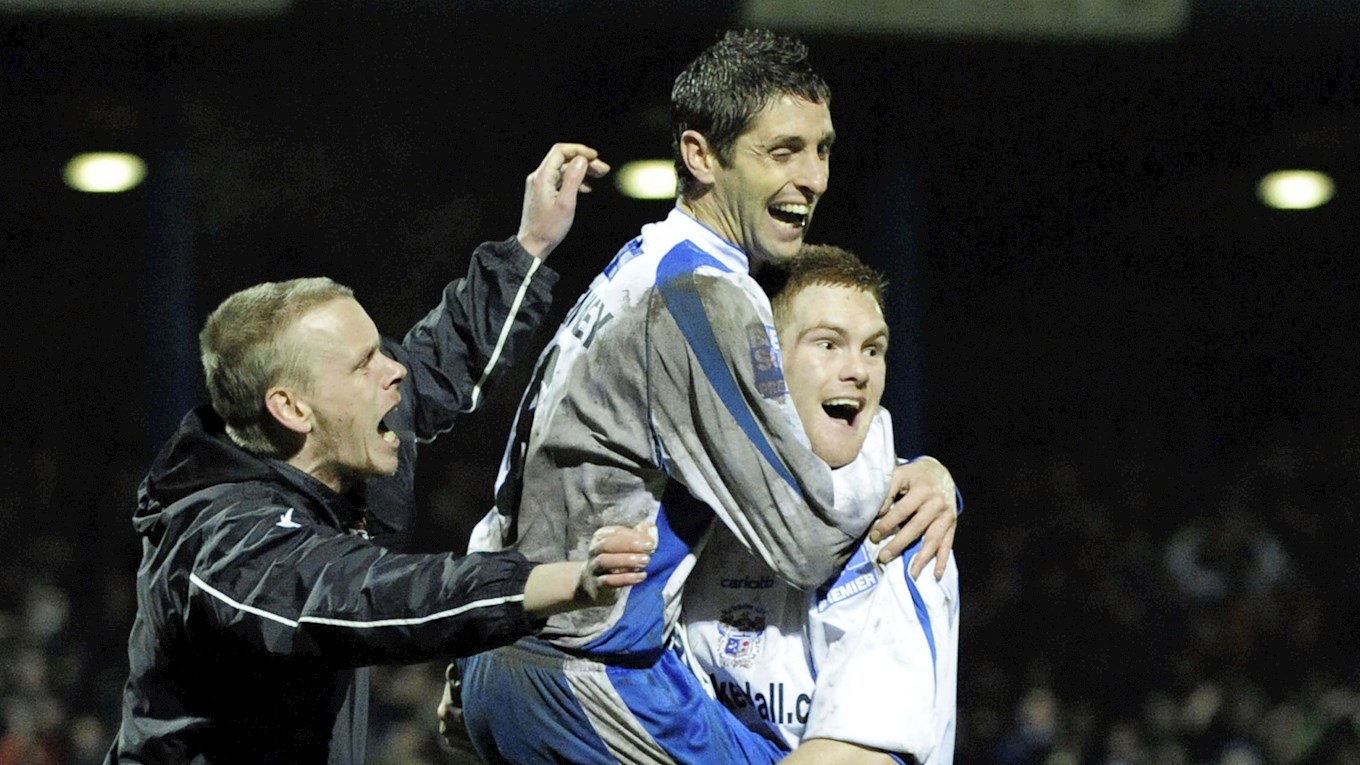 Matt Henney
The popular winger wrote himself in to Barrow folklore in May 2008 when he notched the only goal in that 1-0 win over Stalybridge in the Conference North Play-Off Final.

Having been near the foot of the table just five months earlier, that night at Burton Albion remains one of the most revered memories for all Barrow fans who were lucky enough to witness it.

More than simply scoring the decisive goal, Henney’s overall contribution was outstanding – using his pace and control down the right flank as a huge part of the Bluebirds’ gameplan during the run to promotion.

His height also meant that he could be depended upon to win more than his fair share in the air so it is little doubt that he remains hugely popular with Bluebirds supporters to this day. 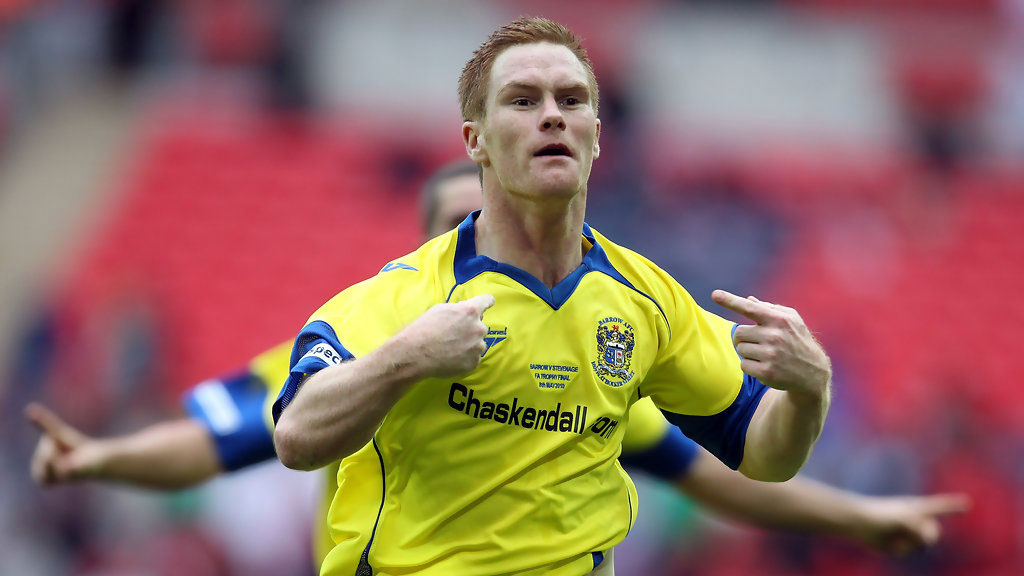 Jason Walker
Another who enjoyed two spells with Barrow, Jason Walker made 214 appearances for the Club in total and found the net 73 times in the process.

Walker was a crucial part of the team which gained promotion back to the top flight of non-league football in 2015 – but it was his earlier spell (between 2007 and 2011) during which he showed fans his very best form.

Initially a substitute capable of creating an impact, he went on to nail down a regular starting spot and will be remembered not just for hitting the net but also scoring astonishing goals and some spectacular strikes.

He played in the Play-Off Final win over Stalybridge in 2008 but etched his own piece of Barrow history in 2010 when he scored a typically dazzling winner in the FA Trophy Final, causing bedlam back in Barrow and a firestorm across the whole of the Furness peninsula.

Click here to cast your vote on which of these Barrow legends should be on the Wall of Fame at The Progression Solicitors Stadium.