Saturday’s game at Newport County might be a bit of a trek for the Barrow squad but the 2020/21 campaign overall will still mark a significant reduction in miles covered to games.

Last term The Bluebirds were due to travel over 10,200 miles in round trips to complete their fixtures in the National League – that figure in League Two this season will drop to less than 9,000.

The trip to Crawley Town in mid-December is the longest of 2020/21, with 327.6 miles standing between The Progression Solicitors Stadium and The People’s Pensions Stadium.

Our journey to Exeter City is only one mile shorter, while Colchester United weighs in at 325 miles and Southend United’s Roots Hall base is 319.4 miles from Barrow.

At the other end of the scale, rivals Morecambe will comfortably be the shortest trip of the campaign when we travel just 49.5 miles to The Mazuma Stadium in December.

Bolton Wanderers, Carlisle United, Bradford City and Salford City all represent one-way journeys of less than 100 miles too, which has helped to bring that overall figure down this term.

In total, we’ll travel 8,956.6 miles in round trips to complete our League Two fixtures during 2020/21 - and here’s how that breaks down team by team. 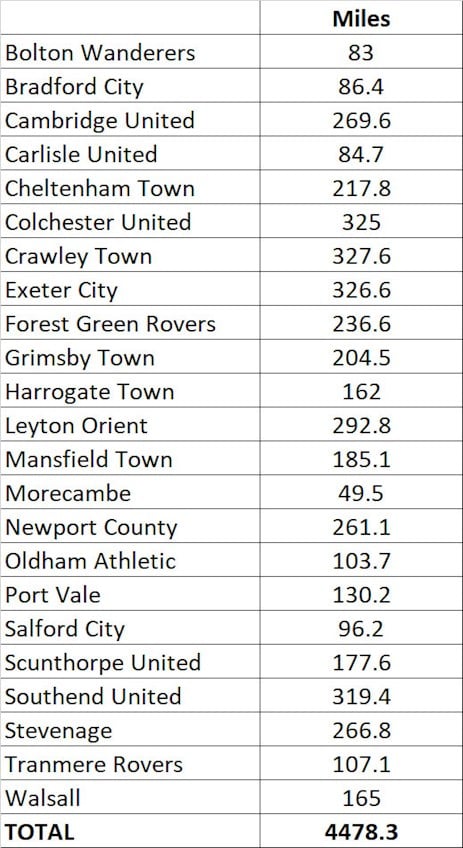 (Based on Harrogate Town playing at Doncaster Rovers)