Barrow Chairman, Paul Hornby, brings fans up to date with how the Club is operating during the ongoing pandemic.

First of all, I really hope you are all staying safe, we are certainly operating in strange times. It doesn’t seem like the season has started properly at the moment such is the muted noise from stadiums.

Prior to any season commencing we would have always held a supporters’ question and answer session and this year, more than most, I know you will probably have lots of questions. Unfortunately, it’s something we just can’t do so I’m going to give you all regular updates concerning how we are operating during this unprecedented period.

Those of you who heard me on BBC Radio Cumbria last Tuesday evening will know we are monitoring our cash flow pretty much daily at the moment. Promotion brought its own challenges in that we’ve had to invest further monies in the stadium to become compliant with the various regulations. The extra money being a league club gives us has certainly helped in this regard, but we still need to finance ongoing operations during the season.

The loss of fans was always going to be a concern, but the way the Barrow supporters responded by purchasing Season Tickets gave us a fighting chance of keeping our loss this year at around £500,000, which the owners will finance.

Within our cash flow we’d assumed away fans and paying supporters would return in the New Year (as per previous advice from the EFL). However, the latest Government news has been a hammer blow and significantly deteriorates our position. The 2020/21 season loss is now rising towards £750,000 which makes us even more grateful of the support from Season Ticket holders.

Also within our cash flow we obviously retained a core of the squad from last year and strengthened some of those deals with improved contracts. We have supported David with incoming players to give us the best possible chance of consolidating in the Football League.

The way you’ve supported the club by purchasing 1,100 Season Tickets has been truly amazing and we are so pleased that the iFollow service allows supporters to view games as an alternative. I’m not even travelling to away games at the moment but choosing to use iFollow and watch the games in the safety of my own home. Supporting the Club in this way makes a huge difference to how we can compete during the season as, without this income, our losses would exceed £1m, which starts to put significant pressure on the ownership model.

We don’t take your support for granted and therefore in the next few weeks the owners are going to talk about additional benefits for Season Ticket holders to show our appreciation for your continued backing.

We've waited 48 years to get back in to the Football League so it's imperative we now remain here for the next 48 years! The Board is committed to the long-term future of the Club and we need everyone's help to get through the significant financial challenge created by this unprecedented pandemic. If we all pull together, we are confident that we can emerge stronger, with a team and a ground that the town can be proud of. 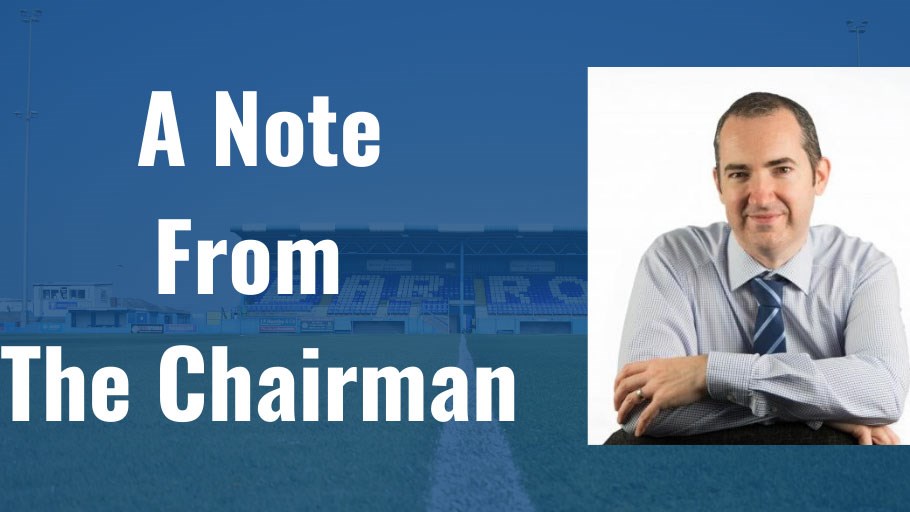 
Following the Bluebirds promotion to the Football League, Paul Hornby has provided a comprehensive update to supporters.