We take a closer look at the viewing figures for each of our League Two games that have been broadcast live on iFollow this season.

Barrow fans could be looking at a record number of iFollow Match Passes bought this weekend as Rob Kelly’s Bluebirds make the trip to Bolton Wanderers.

The previous record for away game passes purchased was set back in October when 698 fans cheered the lads on virtually by watching the derby at Carlisle United online with us.

We’ve got close to equalling that tally on a couple of occasions – most recently when 696 Bluebirds were watching as the lads travelled to face Bradford City at the end of last month.

However, interest is high in this weekend’s fixture at The University of Bolton Stadium off the back of a brilliant win at Oldham Athletic in midweek so could we hit 700?

Below we take a look at how our virtual followings have stacked up throughout the 2020/21 campaign, both on our travels and at The Progression Solicitors Stadium.

Fans should note that our home game figures do not take in to account Season Ticket holders who have complimentary access and would add an average of around 650 viewers per fixture.

The Bluebirds stand to make around £8.30 for every £10 Match Pass sold, though it must be considered that, when we are away from home, revenue from the first 500 purchases goes to the home club. 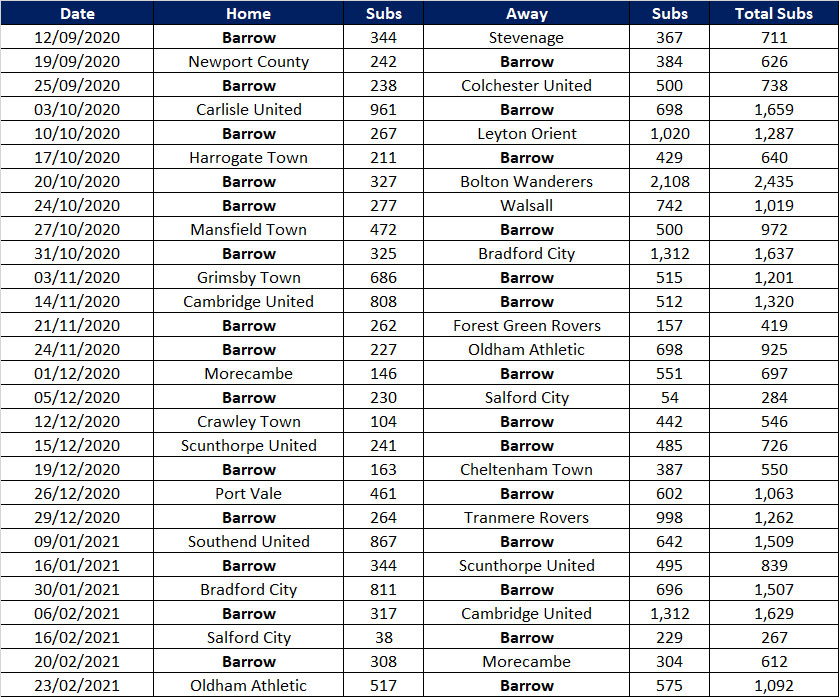