Josh Kay put pen to paper on a new deal with The Bluebirds and then vowed to deliver his very best form for new boss Mark Cooper and the Barrow fans.

The winger was initially released by the Club last month, but Cooper acted quickly to reverse that decision and opened talks with Kay over a fresh contract which was swiftly agreed.

The 24-year-old star has revealed that his conversations with Cooper played a key role in his decision to stay with the Club and he can’t wait to get started again under the new regime.

“I am absolutely over the moon,” Kay told us.

“I had a few different options which I was looking at but, at the end of it all and after I had spoken to my family and my agent, Barrow was the best one for me, especially the way the Manager is looking to play.

“I have spoken to him and he has told me where he sees me fitting into the side and it feels like finally, after three seasons here, I am going to get a chance to play the position I feel I am best at.

“One of the main things that swayed me was how much the Manager wanted me, that just makes you feel good from the off and I feel like I owe him now and I want to do my best for him.

“I am buzzing, I honestly just can’t wait.”

Kay, along with his teammates, is enjoying some downtime during the summer ahead of a return to pre-season training at the beginning of next month.

However, he insisted that he is focused on ensuring that he is in the best shape he can be to hit the ground running when the work begins ahead of 2021/22.

“I’ve had a couple of weeks and I didn’t really play much towards the end of last season so I have already started getting the work in because I felt like I did lose a bit of fitness.

“I am glad that I am starting early and I have got another four weeks until we’re back for pre-season - I’m not saying I am going to be coming in like Jason Taylor or anything like that but I will be fit and raring to go!

“I want to give the Barrow fans the best version of myself because I feel like I did that for the first half of last season but not the second and that’s played on my mind a lot.

“I owe it to myself because I have worked so hard to get into the position I am in now but I have realised that I need to be the best I can be every single day.”

For now, Kay is daydreaming of next term and the opportunity to once again perform in front of a packed out stadium as Barrow look to further consolidate their position in League Two.

And with ambitious owners and an experienced Manager in place, the talented attacker reckons there could be some more good times ahead for The Bluebirds faithful.

“I get giddy thinking about playing in front of a full stadium again,” he admitted.

“I can’t wait to see all the fans there and hopefully if everything goes smoothly with the way we’re playing then the place will be buzzing – it’s going to be so good!

“When I came to Barrow, the Club had just survived relegation from the National League.

“To see where they are now from then, it’s a massive difference and we have some really good owners in Paul Hornby, Tony Shearer and the others.

“They’re really ambitious people who are doing the best they can for the town, the community and the Club. It’s paid off so far and I can only see it continuing to pay off in the future.” 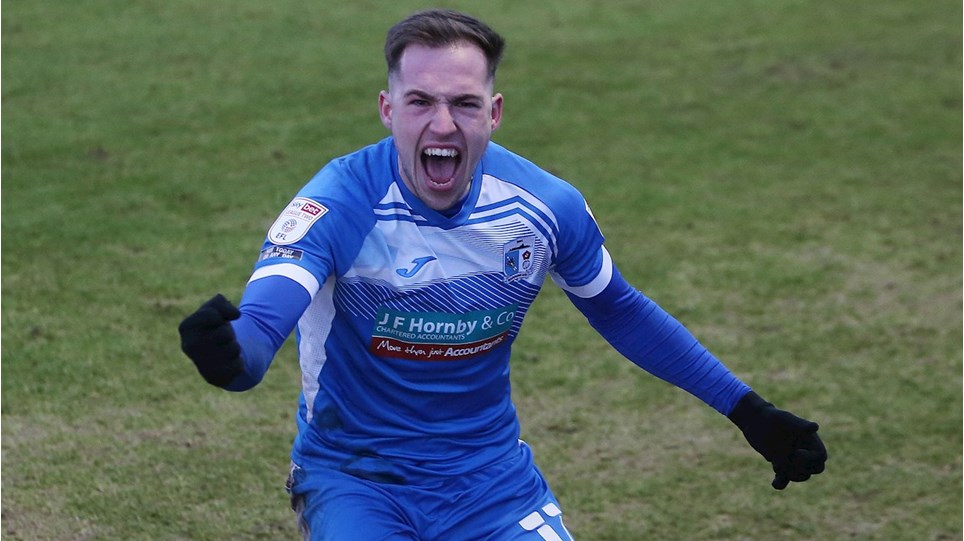 
Josh Kay has signed a new deal to extend his stay with Barrow after new boss Mark Cooper moved quickly to bring him back to The Progression Solicitors Stadium.