We’ve been doing a little bit of digging on Banbury United to give Bluebirds fans more of a feel for this weekend’s FA Cup First Round opponents.

A is for Appearance Record
Jody McKay holds the club record for the number of appearances made for Banbury. The legendary front man played a whopping 647 times for The Puritans through the mid-1990s and into the 2000s, helping himself to some 178 goals.

B is for Biggest Game
It’s been suggested that this Saturday’s tie is the biggest game in Banbury United’s history, given the added spotlight of ITV4 exposure. It’s the first time they have played against a Football League club in the FA Cup since their goalless draw with Northampton Town in 1973, after which they lost the replay 3-2 away from home. 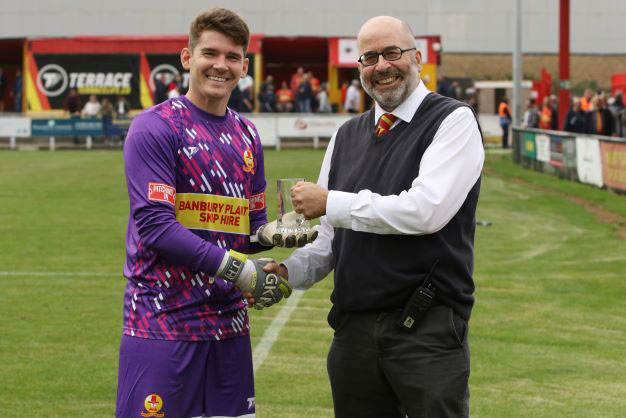 C is for Chairman
Phil Lines stepped down as the Chairman of Banbury United during the summer and so Stephen Barlow has taken over on an interim basis. Stephen is Secretary of the Community Benefits Society which owns the club and also looks after media affairs for The Puritans in his spare time away from his day job as Competitions Manager for England Hockey.

D is for Disappointment
Whilst they’re delighted to be playing in Round One in front of the television cameras this weekend, there remains a huge disappointment that local boy Jack Harding won’t be able to feature. The long-serving goalkeeper has been between the sticks at Banbury since the fan-led takeover five years ago and remains first choice for Andrew Whing’s men. However, in a cruel twist of fate, Harding dislocated his elbow against Leiston just over a fortnight ago and so will be sidelined on Saturday.

E is for Employment
If Banbury United’s board need a hand totting up their figures following this weekend’s lucrative FA Cup tie then they need look no further than left-back Sam Brown who is a high-flying chartered accountant by day. Meanwhile, right-back Connor Roberts can be relied on to get a selection of tasty post-match meals for the Puritans squad – he works for takeaway delivery giant, Just Eat!

F is for FA Cup
This weekend will mark the sixth occasion in which The Puritans have competed in the First Round Proper of the FA Cup. They also managed this last season but that was the first time they’d made it to this stage since way back in 1973/74. Banbury have already had to negotiate four tricky ties in this year’s competition to reach the First Round stage. They saw off local side Ardley United in their first tie, before edging past Nantwich Town, Basford and then National League South outfit Bath City to clinch a place in Round One.

G is for Goalscorers
Astonishingly, the Banbury all-time goalscoring record is shared between Dick Pike and Tony Jacques who both netted an incredible 222 goals for the club. Pike played between 1935 and 1948, while Jacques was a Banbury star between 1965 and 1976. In the 1967/68 campaign, Jacques scored 62 times – not surprisingly, that is another club record.

H is for Highest Attendance
Records show the highest crowd to watch a Banbury United game was the 7,160 who watched their FA Cup Third Qualifying Round tie against Oxford City in October 1948. However, with a sell-out crowd of 2,400 expected at The Banbury Plant Hire Community Stadium this weekend, this will be the biggest attendance they have had there since 4,800 turned up for an FA Cup First Round tie against Northampton Town in 1973/74. This season, they’re averaging home crowds of around 525.

I is for Installation of Floodlights
The Puritans have worked hard to raise the funds to install new floodlights at their stadium this season and they were used for the first time in their recent game against Leiston. It’s the first time they’ve been replaced in over 50 years – in fact, their first floodlights were celebrated with an inaugural match against Port Vale in 1966, then managed by the legendary Stanley Matthews!

J is for Jimmy Cringan
It seems unlikely that the duration of Jimmy Cringan’s stint as Banbury manager will be beaten any time soon. Known affectionately as ‘The Boss’, Cringan was appointed to the role in 1936 and was to remain in the dugout for an astonishing 25 years until his retirement in 1961.

K is for Kit
The Puritans’ home kit is a traditional red and gold, worn by the club since its inception in 1931. There was a brief period when they first changed their name to Banbury United when they wore white and blue, but they quickly reverted to red and gold. A Banbury company, The Terrace, produce the kit for them and this year’s home shirt design was selected from entries to a competition.

L is for League
Banbury United currently play in the Southern League Premier Division Central having returned to that level with a play-off triumph in 2015/16. United had finished runners-up and defeated Winchester in a nervy semi-final before overcoming third-placed Taunton in the Final to clinch promotion. 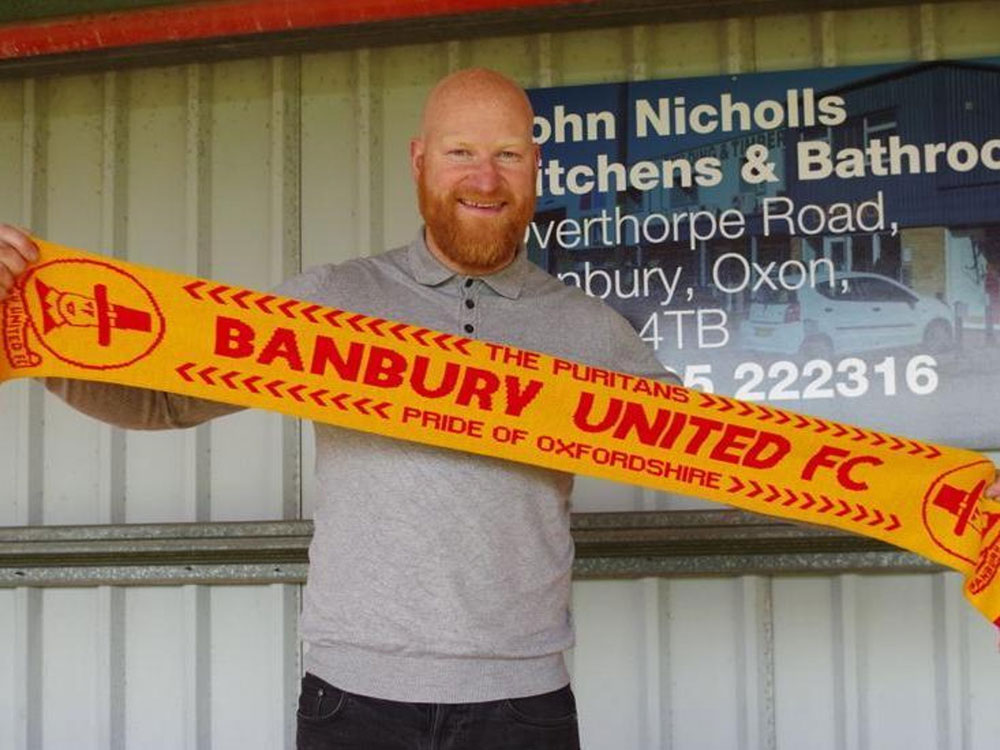 M is for Manager
Andrew Whing has been in charge at Banbury United since May 2020 when he arrived to succeed Mike Ford, who had served five years in the hotseat. A former Coventry City, Brighton & Hove Albion and Oxford United defender, Whing brought bags of experience to the role and has overseen good progress in his first 18 months at the helm.

N is for Nicknames
Banbury United are known as The Puritans, presumed to be a link from the Civil War and the fact that some of the most famous battles during the conflict took place in their local area. The club has also been referred to simply as The Reds.

O is for Owners
Banbury United are fan-owned and have been since the summer of 2015 when the Supporters’ Club launched a takeover which was finalised in the May. Working closely with Supporters Direct, Puritans fans formed a Community Benefits Society to buy the club and they immediately set about getting it back on an even keel after trouble which had led to relegation that summer. They have a full-time Community Coach employed through a Community Lottery and local funding, while they also have a part-time Promotions Manager – but, other than that, it’s down to volunteers.

P is for Past Players
Perhaps the most famous player to pull on a Banbury United shirt was celebrity restaurateur and television personality, Gordon Ramsey OBE. Ramsey was a marauding left-back during his younger days and his form for Banbury’s Under-18s not only drove him into First Team contention there but also earned him a trial at Glasgow Rangers. Sadly, a serious knee injury put paid to his dreams of being a footballer – though that seems to have turned out alright for him in the long run.

Q is for Queen
The club’s cup run might be good news for all involved at Banbury United, but it’s bad news for one local Queen tribute act. The Puritans had booked the band to play in the clubhouse on Saturday night but have had to cancel due to the First Round tie against The Bluebirds. The game must go on!

R is for Railway Coaches
Prior to 1966, the club had famously used railway coaches as their changing rooms at the Spencer Stadium on Station Approach. However, when the club joined the Southern League, they installed floodlights and built an all-new clubhouse.

S is for Spencer Villa
Banbury United was originally formed in 1931 as Spencer Villa, a works club who played friendly matches on the town’s Middleton Road. However, the club changed its name to Banbury Spencer in 1934 when they moved to its current home stadium and began competing in the Oxfordshire Senior League.

T is for Transfers
Reports tell us that the £2,000 stumped up to buy Phil Emsden from Oxford United is Banbury’s record buy in 1980, while the £20,000 paid by Derby County for Kevin Wilson in 1979 is their record transfer fee received.

U is for United
It was in 1965 that Banbury Spencer became Banbury United, following the acquisition of the club by a band of local businessmen after the Spencer Company had ended its association.

V is for Viewing Figures
This weekend’s game will be the first time that The Puritans have had one of their games screened live as the feature event. Last term, they also reached the First Round and, with no crowds allowed due to COVID-19, they were broadcast live behind the red button on BBC as they took on Canvey Island.

X is for X-Rated
In the 1938/39 season, The Puritans came up against a West Bromwich Albion ‘A’ side who simply proved too strong. Banbury eventually lost the game 11-2, which remains their heaviest competitive defeat. 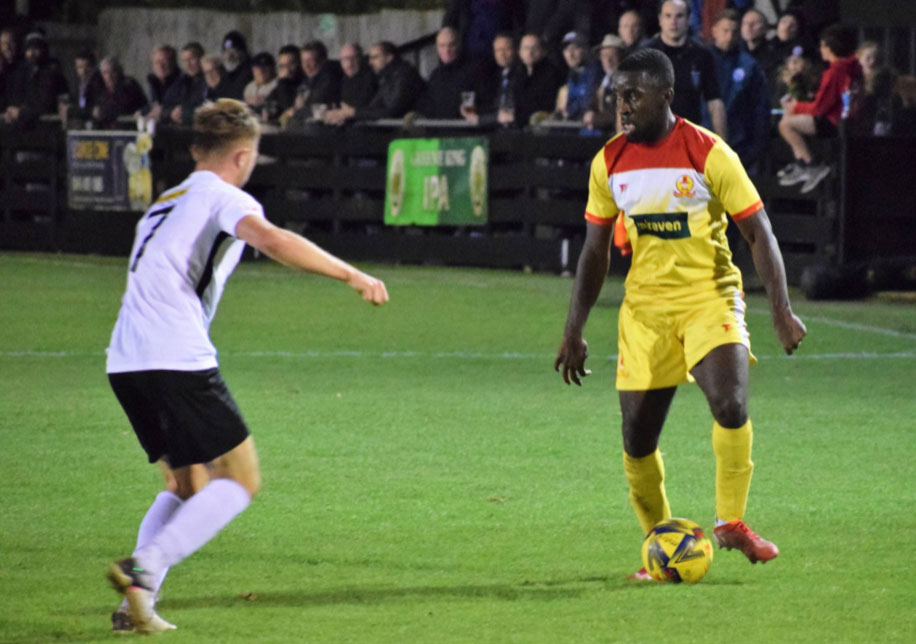 Y is for Yellows
The Puritans don a dazzling yellow shirt for colour clashes away from The Banbury Plant Hire Community Stadium and ‘Yellows’ is the chant often heard from travelling supporters on those occasions.

Z is for Zero Defeats
The Puritans have enjoyed a superb opening few months to the 2021/22 campaign and they remain unbeaten in all competitions after 19 games. They’ve won five in a row in the league which leaves them sitting third in the table, just four points behind leaders Peterborough Sports but with two games in hand.