Opposition
Crawley Town were formed in 1896 and played their formative years in the West Sussex and Mid Sussex Leagues at various grounds around the town. Crawley adopted professional status in 1962 and joined the southern league a season later. They would see out the next 20 years within the Southern League First Division besides a brief period in the Premier Division in 1983/84. In 1991/92 Crawley enjoyed their best-ever FA Cup run, where they enjoyed victory over neighbours Brighton & Hove Albion in Infront of just over 18 thousand fans who packed the Goldstone Ground.

Crawley won the Conference title, which they achieve in the 2010/11 season. They would go on to be promoted from League Two the next season and remain in League One for the following 3 seasons before relegation. Crawley Town would challenge for Play-Offs in their first season in League One falling short and finishing 10th, their best finish in the Football League.

The Red Devils have endured a difficult start to the campaign currently situated in 20th place in League Two, Unbeaten in their previous 4 games in Sky Bet League Two, although two recent defeats in both FA Cup Carabao Cup and at the hands of Burnley and Accrington Stanley respectively.

The Venue
The Broadfield Stadium opened in 1997, becoming the home to Crawley Town as well as being a multi-purpose stadium. The ground holds a capacity of 6,134 and replaced Town Mead after the club had spent 48 years at the facility.

The record attendance at the Broadfield Stadium came in the FA Cup in 2013, where 5880 supporters would see The Red Devils defeated 3-1 in the 3rd round.

Head To Head
The two sides have played each other in 4 professional fixtures, which have all come in recent years since Barrow’s promotion back to The Football League. Crawley Town has enjoyed the better time in head-head taking 3 victories out of the 4.

The Bluebirds' victory in the fixture came in dramatic fashion in March 2021, Scott Quigley’s 95th-minute winner delivered Barrow with all 3pts in the 5-goal thriller. It was Scott Quigley’s second goal of the game with Tom Davies also on the score line having pouched early in the game to give Barrow the lead. Crawley Town would bounce back twice but for a last-minute goal which sent Holker Street into wild celebrations.

Referee
Officiating duties on Saturday have been assigned to Carl Brook, he will be supported by Andy Bennett and Stuart Butler. The Fourth Official will be Daniel Cook.

Carl Brook has been in charge of 15 fixtures this season across the EFL, with his most recent coming last weekend as he oversaw Chippenham Town’s FA Cup giant-killing, as they knocked League One Lincoln City out of the competition.

Carl Brook has referred both sides in the past, Bluebirds fans might remember him from our 1-0 away victory at the Banks's Stadium in March 2021. A match that saw Barrow defeat Walsall with Josh Kay scoring the only goal of the game in the 87th minute to snatch all 3pts.

Tickets
The date for gauranteed delivery has now passed, but Barrow fans wishing to attend the fixture can purchase a ticket on the day at Crawley.

Fans will be able to listen to exuberant commentator Adam Johnson at Broadfield Stadium to describe all the action as it unfolds. 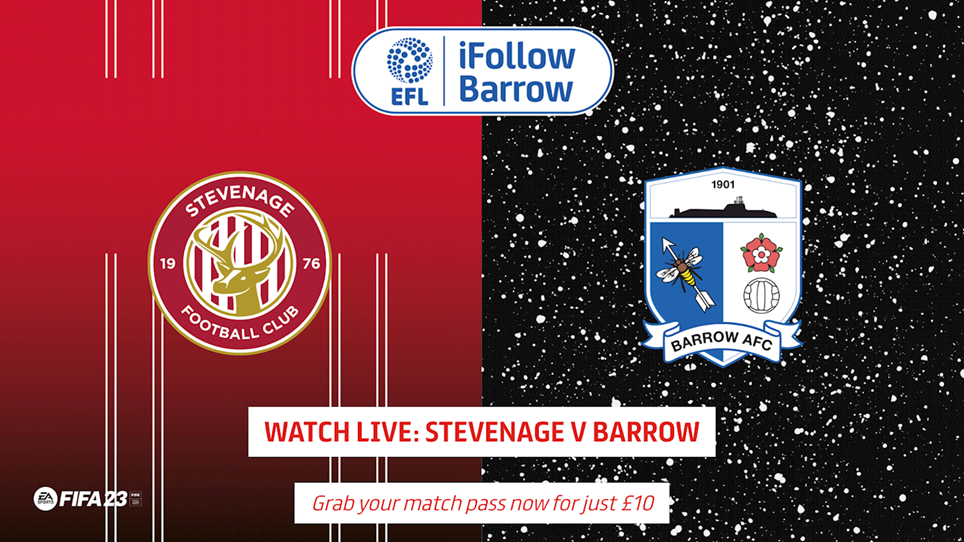