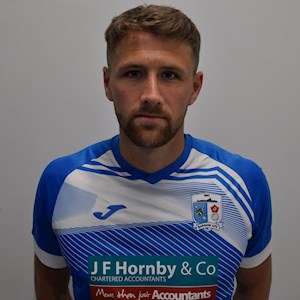 Born in Carlisle, Patrick made his way through the youth system at Carlisle United and signed his first professional deal with the club in the summer of 2013, making his debut in the First Team in August of that year.

He went on to make 40 senior appearances for the club before he was released in May 2017. He also spent two spells out on loan during this time – in January 2016 he spent a month on loan with Lincoln City in the Vanarama National League playing four times and in November 2016 he went on loan for three months to Salford City of Vanarama North where he made 20 appearances.

In July 2017 he joined League Two Morecambe and over the following season he played 20 games before being released and in the summer of 2018 he joined Falkirk in the Scottish Championship. He made sixteen appearances for the Bairns before he was released and joined Barrow in June 2019 and made his debut on the opening day of the season at Wrexham.

A member of the National League title winning squad.